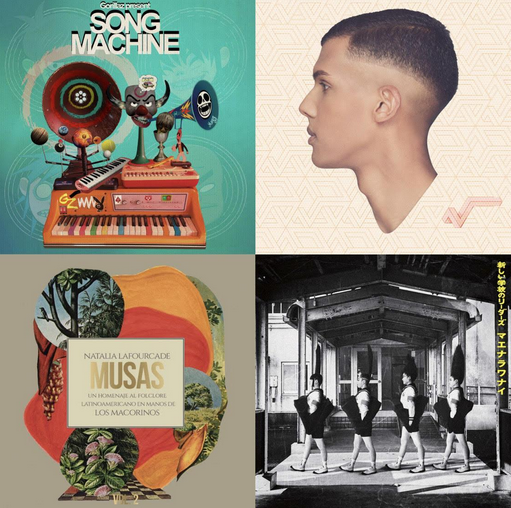 A collage of album covers from this edition of Songs You Should Hear: International Bangers Edition.

Music is a universally enjoyed pastime, passion and profession. Whether or not the lyrics are easily understood, music transcends language and communicates via emotions through melodies and notes. For this edition of Songs You Should Hear, take a journey through Europe, East Asia and Central America. Whether or not you’ll take a deeper look into the lyrics or their translations—each track has its own story to tell through their masterful melodies and catchy compositions.

Like many other Stromae songs, the Belgian-Rwandan singer and songwriter dove into hard hitting topics within the first verse. While the instrumentals compel you to dance, those with French literacy might notice a storyline unfolding within each line. Stromae embodies two halves of a relationship—a man and a woman in this case—and it’s not a very healthy one by any means. The juxtaposition of such catchy beats with the lyricism diving deep into the complexities of love and relationships is what makes this track so irresistible to keep on replay.

This fast-paced, whirlwind of a song by four-member Japanese girl group ATARASHII GAKKO combines jazz and rock elements, giving listeners a new musical experience within four minutes. Second-year Shawna Itakura is responsible for providing cultural context to the song—titled as the romanticization of the Japanese title “SNS 24 Hours”—which alludes to the Japanese television program “Police 24 Hours.” The lyrics insinuate how influencers on social media go through drastic measures in order to gain attention, so much so they risk getting arrested. Let loose and allow the chaotic instrumentals to carry you away—maybe don’t get arrested though.

South Korean rapper and producer B.I speaks of lovers who are meant to be, using “BTBT” or “biteul biteul” (Korean for ‘staggering’) to describe the suitor’s hasty steps towards their lover. Joined by South Korean singer DeVita and American rapper Soulja Boy, B.I lulls listeners with a chill, smooth beat accompanied by lax vocals that build up to a chorus of which you can’t help repeating all day. This song remains on repeat as every listen encourages a new emotion or expression: dance, lament, clean or whatever it may be—this unexpected collaboration fits it all.

This wouldn’t be a complete “Songs You Should Hear” list from me without including a song by world-renowned British band Gorillaz. The track features other prominent British artists that lend themselves to creating what I can only describe as a “very English song.” Filled with nostalgia, the track itself fluctuated between slowthai’s energetic rap and relaxed vocals of Gorillaz singer-songwriter Damon Albarn and Slaves singer Isaac Holman. The song was released in the midst of a global pandemic which left people worldwide to search for those fleeting moments of bliss during a tumultuous time—this is expertly reflected in the back and forth of energetic, playful rap with the interludes of laconic vocals.

Mexican folk singer-songwriter Natalia Lafourcade worked with legendary guitarists Los Macorinos to produce this complete and utter masterpiece. The album as a whole is composed of traditional Latin American folk songs—covers and original pieces alike—and went on to win the 2017 Latin American Grammy for Best Folk Album and Best Long Form Music Video. The song itself describes learning how to reflorecer, or to bloom again—stressing that downturns in one’s life will be met with healing and new beginnings. Lafourcade’s voice in combination with the large band of guitars, trumpets and percussionists fosters a sense of inspiration, like the perfect background music for a transformative montage.