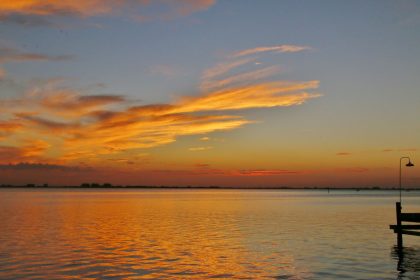 “Man, it cuts like a dull knife when you’re young and you’re told, ‘Makes sense when you’re older,’ darling, let’s get old,” Jake Ewald, previous co-frontman of pop-punk band Modern Baseball, sings on Slaughter Beach, Dog’s simple yet memorable love song, “Acolyte” from the 2017 album Birdie. The band’s strength lies in Ewald’s storytelling abilities, something that shines through in this beachy folk-rock track. “Acolyte” is sweet without being sickening, the perfect song for a sunset date and solo bayside bike ride alike.

“Apartment” by Young the Giant

“Apartment” as the first track off alternative rock band Young the Giant’s 2010 debut self-titled album effectively captures the anxious, emotional energy of midterms and mid-Pisces season on campus. The song’s lyrics epitomize the experience of being young and messy, coming off both casual and dramatic simultaneously and bursting with self-doubt and angst. “I hit the sidewalk and this is how it starts, hide in a raincoat when things are falling apart,” frontman Sameer Gadhia sings, encouraging the listening to revel in their own personal letdowns for a moment before returning to reality.

Revert to a sad, Tumblr teen version of your current self with “haunt me (x 3),” one of indie rock band Teen Suicide’s most quintessential ambient works. The short-lived but successful group, made up of vocalist and guitarist Sam Rey and drummer Eric Livingston, is best known for its emo, experimental sound, perfectly exemplified by this chill yet somewhat troubling track. “Whether you’re aware of it or not, I am willing to bet you that there is a way that you are disappointed in yourself,” the sampled voice states, ending the song with a heavy, emotionally-charged message. “haunt me (x 3)” is hypnotic, made for miserable days concluded by beautiful, rewarding bayside views.

“Evening Sun” by the Strokes

Off the Strokes’ 2006 album, “First Impressions of Earth,” “Evening Sun” feels like the hottest days of summer coming to a bittersweet end. “I’ll be dreaming I was sunburned, I don’t wanna break your heart in, break your heart in two halves,” lead singer and songwriter Julian Casablancas sings regretfully, embodying both warmth and heartbreak in equal, deliberate measures. “Evening Sun” is undemanding, its repetitive lyrics and soothing vocals letting the listener simply forget the world and unwind.

Check out the Spotify playlist for this column at https://spoti.fi/2TAyZF2.