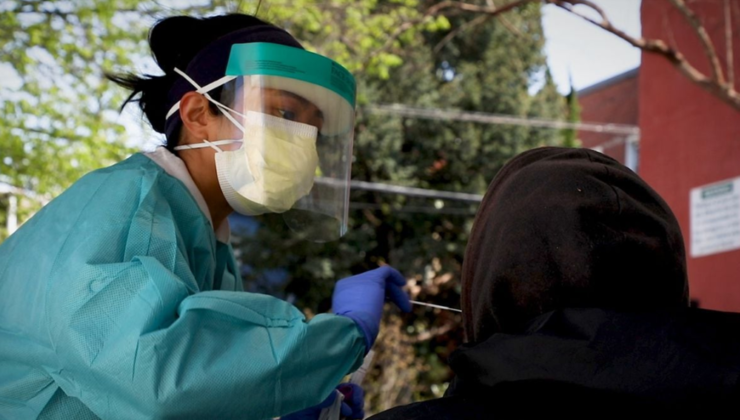 As federal disaster relief funding in response to the coronavirus pandemic arrives in fits and starts, mutual aid organizations have proliferated throughout the state of Florida. In Sarasota, community organizations such as the Peace Education and Action Center (PEACenter) and Streets of Paradise (SOP) have combined forces to create the COVID-19 Mutual Aid Fund to encourage solidarity and raise and redistribute resources for the city’s most vulnerable individuals.

Essentially, mutual aid is the belief that communities should share with each other reciprocally, and that individuals can help meet one another’s needs in a self-directed, grassroots way rather than relying exclusively on top-down government solutions that may come too slowly or fail to offer adequate support to the people most at risk. Throughout the coronavirus pandemic, mutual aid initiatives have included starting funds to redistribute resources as well as coordinating care efforts for people who are self-isolating, especially if they are part of a more at-risk demographic including the homeless, elderly, disabled, and those with pre-existing health conditions.

Second-year Becca Hadwen, who has been involved with several aid groups including the Miami-based group Dream defenders, commented on the essential nature of mutual aid. Hadwen reflected that many members of the Sarasota community have found themselves increasingly vulnerable as they have lost their jobs, become ill or faced homelessness due to the pandemic.

“Systems of white supremacy, patriarchy and capitalism put people in our communities in constant states of vulnerability to economic, physical and emotional distress,” Hadwen said. “Mutual aid is part of the necessary relief to that distress that at once embodies and makes space for the relief that our communities need.”

As the past weeks have demonstrated, federal relief funds can sometimes reach local governments in a trickle, leaving many communities high and dry in times of crisis as they wait for financial support. Oftentimes, the most vulnerable individuals in a community may not receive government aid at all.

Arlene Sweeting, co-founder of the PEACenter, has been working to address this issue in partnership with Streets of Paradise, which is a nonprofit organization that works to provide food and hygiene items to the homeless community in Sarasota.

Founded in 2007, the PEACenter is a nonprofit, 501(c)3 hub for community organizing in Sarasota that works to provide education and resources for individuals working to bring about positive social change. The PEACenter operates two radio stations, WSLR at the Fogartyville Community Media and Arts Center and WBPV in Bradenton. The organization also provides fiscal support to several community coalitions including the Suncoast Climate Justice Coalition, the Manasota Anti-Racism Coalition, the Anti-Racism Working Group, the New College Food Bank, the Ranked Choice Voting Committee and Move to Amend.

“People are realizing how important mutual aid is right now, because we see the government failing us,” Sweeting remarked. “So how can we and the community build a network for support for people that need it and make sure that people have access to the resources that they need?”

One answer to Sweeting’s quandary has come in the form of the organizations’ COVID-19 Mutual Aid Fund. The Fund has been supported by donations from the 2020 Giving Challenge, which took place from April 28 to 29 and was created by the Community Foundation of Sarasota County, a registered 501c(3) nonprofit corporation. Throughout the duration of the Giving Challenge, the Mutual Aid Fund received almost $3,000 in donations, which will go towards distributing resources to members of the Sarasota community that need support in the wake of the pandemic’s disastrous economic impact. Individuals and businesses can continue to donate to the fund if they missed the opportunity to participate in the Giving Challenge.

The organizations decided to create the fund in partnership because SOP is a relatively new non-profit organization and the 2020 Giving Challenge required participants to have been operating for two years. SOP celebrated its two year anniversary shortly after the registration period closed.

Sweeting worked with SOP’s founder and President Greg Cruz and Director of Operations Cathy Bryant in different capacities for many years, and expressed that supporting an organization providing for the most vulnerable members of the Sarasota community would be an essential part of addressing the crisis.

“The way that the PEACenter board felt we could be the most help was to partner with an organization that wasn’t going to be able to benefit from the Giving Challenge, but that we knew was already out there and doing the work on the streets for the people that are often forgotten and left out, and that we have a long term trusting relationship with,” Sweeting said.

Before the pandemic, Streets of Paradise worked to distribute meals once a week as well as providing furniture to homeless individuals who had recently acquired housing. Throughout the pandemic, SOP has ramped up its operations to serve between 150 and 200 meals on the streets of Sarasota every single night. Other organizations such as Second Chance Last Opportunity have also been doing food shares.

As far as support for vulnerable communities from local government, Sweeting commented that the city of Sarasota expressed concerns for the homeless population early on. The federal government earmarked $508,541 in funds from the Coronavirus Aid, Relief and Economic Security (CARES)  legislation for Sarasota county, but as of April 17 the county still had not received the money.

Prior to the pandemic, many people arrived in Sarasota to work at the Sarasota County Fair, but the fair was cancelled and large amounts of fair workers were left without work or housing. According to Sweeting, the city of Sarasota urged the county to fund a facility at the fairgrounds for unemployed workers and the homeless community, but the county did not provide the funds.

In lieu of a lack of funding for the fairgrounds facility, the city instead requested handwashing stations and portable toilets that, after weeks of delay, were installed at the SCAT bus station, the Salvation Army and the closed Resurrection House in the Rosemary District. Homeless advocates have also urged county officials to provide temporary shelter in hotel rooms for the city’s most vulnerable, but the county has yet to fulfill such a request.

The outbreak of COVID-19 has exposed huge gaps in federal, state and local social safety nets, and as the PEACenter Mutual Aid Fund states, “it is showing us how truly interdependent we are.”

“This crisis has helped us to really see the shortfalls of our economic system, our political system and our healthcare system,” Sweeting remarked. “Certainly we need to respond to this crisis, but we also need to respond to the bigger picture as we move forward so that we’re not just looking at one piece of the puzzle, but at the whole puzzle, and figuring out how we come out on the other side of this with a system that is fairer, more just, more sustainable for everybody.”

“I think that in terms of making sure that the future is the future that we want it is critical that people pay attention, speak out, get engaged and connect with a group that is organizing around an issue they care about and contribute to them,” Sweeting concluded. Individuals can get involved by volunteering with Streets of Paradise to distribute meals and hygiene items, or donate to the COVID-19 Mutual Aid Fund.