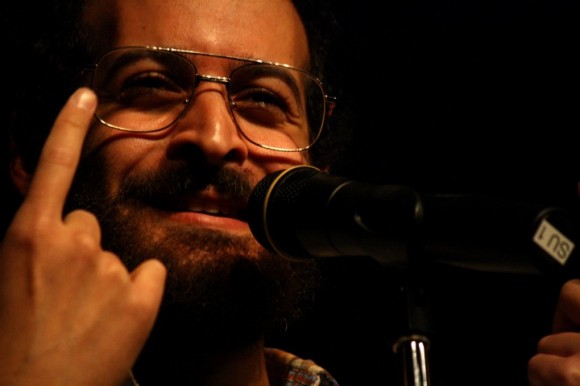 “Come closer,” were the first words spoken to an eager audience as a poet, unassuming in stature but a giant when heard, took the stage on Feb. 19th. Sudakoff conference center was filled with people waiting to hear Anis Mojgani, National Slam Poetry Competition winner two years in a row, gift their ears with words.

Mojgani graduated from Savannah College of Art and Design with a Bachelor degree in comic book art and a Masters in performing arts. He never intended to become a poet, but the profession found its way into his consciousness.

“I thought the idea of slam poetry was fascinating,” Mojgani said. “The idea of giving people an opportunity to express themselves no matter their accomplishments—it is open to anybody who feels the compulsion to express.” Slam Poetry is any sort of poetry performed in a “slam”—a competition that gives poets three minutes to perform their own writing and be judged by a live audience. It puts a dual emphasis on writing and performance, encouraging poets to focus on what they’re saying as well as how they’re saying it.

“For me it always starts with the written word,” Anis explained. “If the written word is as good as I can possibly make it, then it is automatically going to make whatever I am sharing with people better.  There are times when I think of a poem and the ways I can shape it on stage, but even then the emphasis is on its creation.  I have to write it first.”

Mojgani, above all else, encouraged people to find and use their own creativity.  He started writing during his last year of high school in a creative writing class. He was interested in visual art and “poetry,” he said, “just clicked.”

Starting at local open mic nights, he discovered that what he was writing and reading really seemed “to connect and resonate with people.” The response of audiences encouraged him even more.

“It inspired my inner-self and turned on the mechanisms of my creativity,” Mojgani said in the interview with the Catalyst. Onstage or off, the poet gestures emphatically to express his points. “So I just kept going; moving forward and more forward from forward.”

After his performance it was easy to see how the audience’s response encouraged him. His final words were met with an uproar of applause, a standing ovation and a flash flood of people swarming the table in the back, which humbly displayed Mojgani’s recently released book as well as performance DVDs and other merchandise. He’s impressed his fair share of listeners, including some of the most prominent judges in the poetry universe. 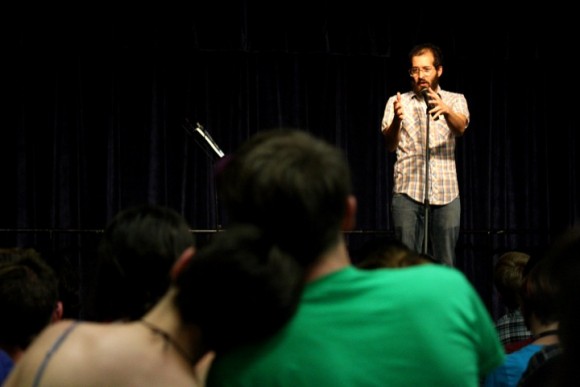 Mojgani says that he hopes his poetry inspires audiences to engage in the creative process themselves.

“It was winning the National Slam Poetry Competition that solidified in my mind what I must do,” he explained. “After I won the first time, it was hard for me, in my head, to believe that I gotten to this place at this point. Slam was so inspiring to me and here I was, ten years after having heard about it, becoming a part of the people who influenced me.”

At that, Mojgani giggled and pushed up his large, endearingly-dorky and gold-rimmed glasses for the fourth time before explaining what it was like being only the second person to win the competition twice in a row. “There was a little bit of swag in my brain,” he confessed. “But more importantly, it was cool because of where it put me in my creativity. If there was something before that I felt I need to prove to somebody, I realized I didn’t have to do that, that I can write whatever I want to see if it works.  What I have written connects with people, so after that victory I allowed myself to explore different works than I had previously.”

He said that he was inspired first by many poets from the Beat generation—poets like Gregory Corso and Jack Kerouac; but lately the writer Richard Brautigan and the poet Frank Stamford. “There is also a number of folks within the spoken word community that I have always drawn inspiration from; Reeves, Derrick Brown, and Andrea Gibson,” he said. (Gibson will be performing at New College on March 11.), “There is a wealth of them out there,” Mojgani said with a chuckle.

“What I want people to realize is their own self-worth and power of their imagination and creativity,” he said. “Anyone is allowed to get up and speak their mind.  When slam poetry was first brought to my attention the people who were performing were the people you see everyday on the streets: the business men, construction workers, the nurses—they were people who merely had something to share.”

Indeed, before Mojgani performed, the audience was warmed up by a few local Novocollegian poets: first-year Vanessa Chastain, alum David Baker (’08), second-year Zach Eidelman and first-year Farrell Ocasio took to the stage and spoke a few phrases they had put to pen. With subtle twists of wordly trickery and a handful of genital gags, these poets each brought a unique voice to the performance. And like Mojgani, they demonstrated their love for poetry as well as the fact that they had something to express and the willpower to put it on stage.

“I think there is a poem out there for everybody,” Mojgani said, bringing his hands to a rest in his lap. “In the corner of their lips and on the edge of their ears there is something to be heard and always something to be said. People just have to believe in their ability to do so.”