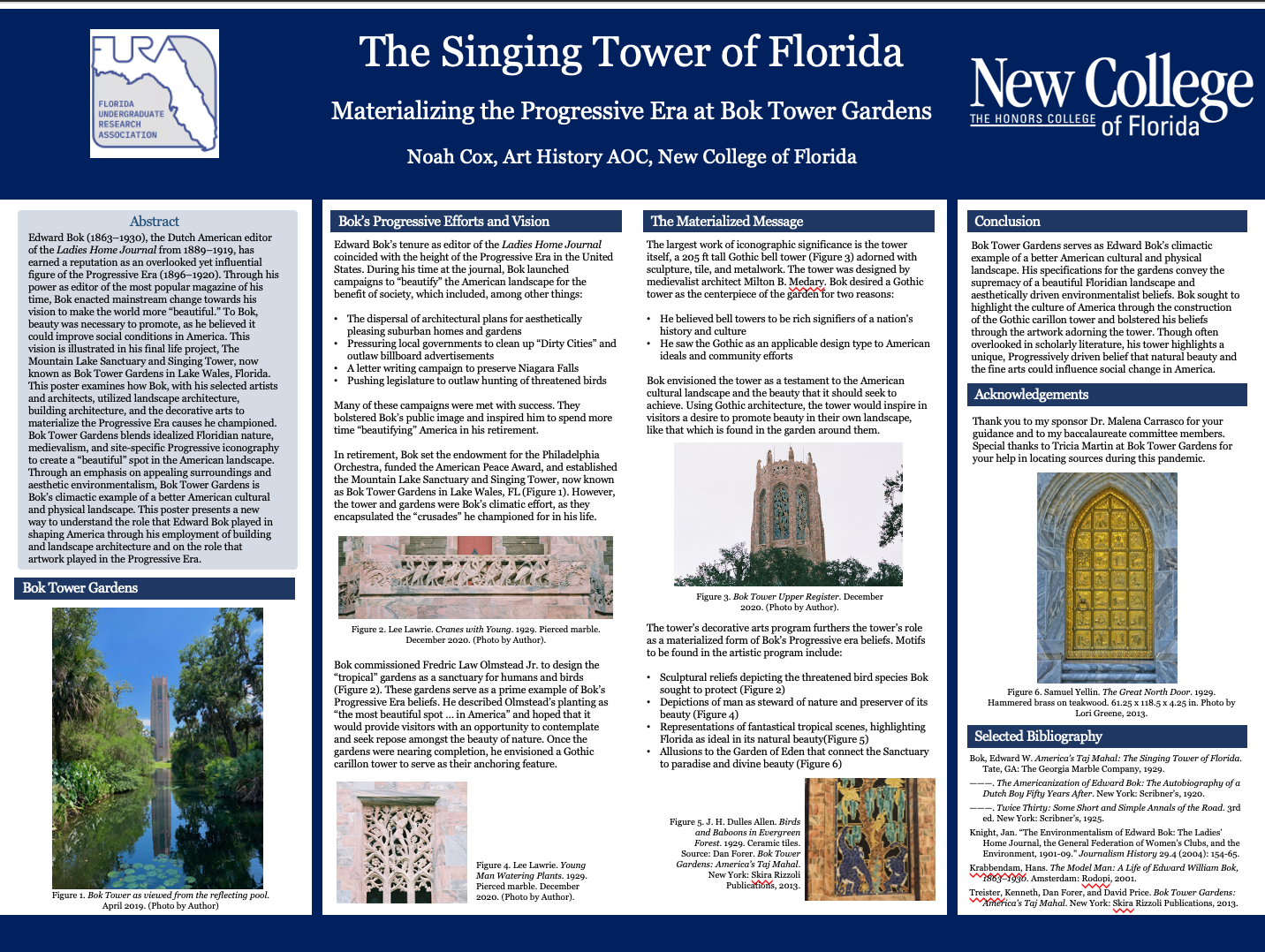 Over the weekend of Saturday, Feb. 27, the Florida Undergraduate Research Association (FURA) hosted their annual research conference over Zoom. The event was co-sponsored by Florida State University (FSU), where an in-person conference was originally planned. For the first time in New College history, six students presented at the conference.

“The FURC is sponsored by the Florida Undergraduate Research Association, a non-profit organization that promotes and supports undergraduate research, scholarship and creative work in the state,” Assistant Director of the Center for Career Engagement and Opportunity Dr. Duane Smith explained. “In partnership with a number of Florida state universities, FURA sponsors an annual conference recognizing and celebrating the research, scholarship and creative work of Florida undergraduates.”

According to Smith, this year was the first time New College participated in the FURC.  Six students, including thesis students Adam Johnson, Noah Cox and Rory Renzy, presented at the conference.

“The 2021 FURC was held virtually, and the organizers worked to make the conference and presentation of research as interactive as possible,” Smith said. “There were a number of workshops, ranging from starting an undergraduate research club or research journal to funding graduate school and getting into medical school.”

“My thesis is doing a matched case study on a pair of development proposals in Sarasota County in order to investigate the design charrette and how democratic they are,” Johnson said. “Design charrettes are a public participation process for urban planners that is essentially an alternative to the public hearing in which a design for a property is created collaboratively with the public.”

Johnson found that creating a poster for his presentation was his favorite part.

“The other conference I went to my second year was just a paper session, and that’s what I’m going to do for the next conference I got accepted to,” Johnson said. “So at first I was a bit annoyed at the prospect of having to create a poster, which I had never done before. But it was nice to see everything laid out so succinctly, a mini version of my thesis, and it was good for me to have a first pass at the basic argument of interpreting my case study results.”

Cox presented some of his thesis research as well, titled “The Singing Tower of Florida: Materializing the Preogressive Era at Bok Tower Gardens.”

Edward Bok was a Dutch-American pulitzer-prize-winning author and editor.  The tower gardens were designed by Bok along with landscape architect Fredrick Law Olmstead Jr.  Bok wanted to turn the area into “a spot of beauty second to none in the country.”

“This was a presentation of my thesis research focused on how the gardens and bell tower of Bok Tower Gardens characterize Edward Bok’s approach to improving the ‘beauty’ of the American cultural and physical landscape,” Cox explained.

Cox also participated in the graduate school recruitment fair and watched a few other student presentations.

“My least favorite part was that the programs were more geared towards STEM majors, i.e. there weren’t many grad schools presenting that had information on the type of MA programs I want to apply to,” Cox said.

Renzy presented some of his thesis research as well, titled, “Time to Clock In: Work-Sharing Policy in the United States.”

“Work-sharing programs are government policies that allow firms to reduce the working hours of their workers and have prorated unemployment insurance make up most of the lost compensation,” Renzy explained. “Since they are mostly used during times of economic crisis, I wanted to see if they work as intended in curbing unemployment levels compared to states without them during 2020 and the pandemic, and I quantitatively find that they do just that.”

Renzy enjoyed receiving feedback from people other than his sponsors and friends for his research. However, he found presenting over Zoom difficult since the conference was only poster sessions rather than paper sessions. He’s already looking forward to presenting at another conference next month.

“I expect that presenting at and virtually attending the Midwest Political Science Association conference in April will be a little smoother, since that has more synchronous sessions instead,” Renzy concluded.

Johnson, Cox and Renzy all recommended the experience, especially to younger students.

“We all will have a thesis by the end of our time here which will be impressive research to impress, and having conference presentations on your resume can be nice if you’re into that,” Johnson said.