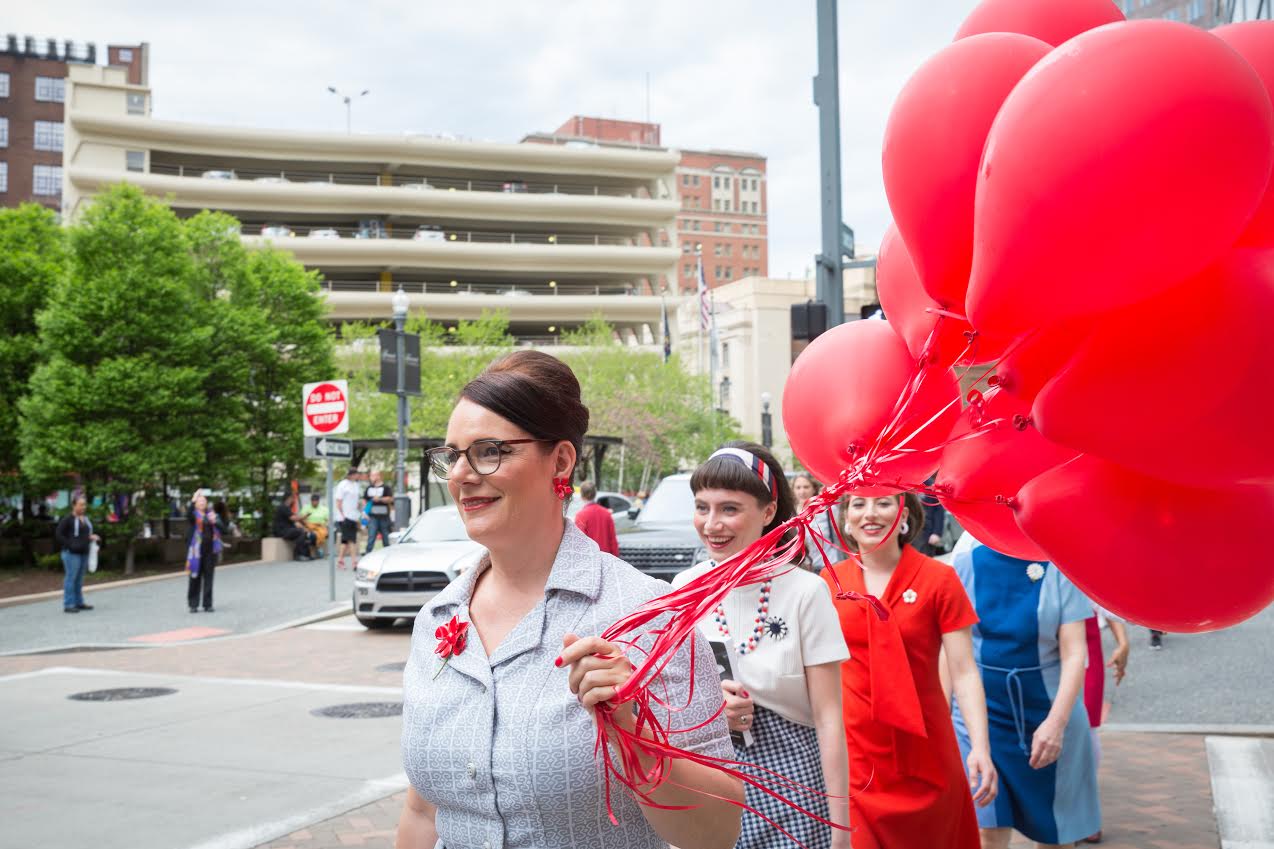 Oring walking around Pittsburgh after a performance of I Wish to Say.

Questions—and their answers—serve as the inspiration for a number of the works featured in Sheryl Oring’s current exhibition at Ringling College of Art and Design (RCAD). Entitled “Agitype: Changing the World One Letter at a Time,” the show is the largest and most comprehensive retrospective of Oring’s work ever organized. A celebration of the last 20 years of Oring’s artistic production, the show features sculptures, prints, art books, drawings, videos and photographs, as well as two interactive performance art pieces—one of which was commissioned specifically for the show.

For RCAD’s Director of the Galleries and Curator of Exhibitions Mark Ormond, who organized the show, the act of questioning is also a central aspect of his curation process.

“As a curator, before I think about anything else, I ask, ‘How is the viewer going to engage with the subject matter?’” Ormond said. “If the material the artist makes doesn’t provide any room for engagement with an audience, then I’m not going to schedule that exhibition.”

Oring’s work fit into Ormond’s vision for an educational and engaging exhibition program through her works’ reliance on the process of questioning to share the opinions and words of the public.

“The whole show really is about the authentic voice of citizens everywhere in the world,” Ormond said. “I think it’s especially interesting in the moment we’re in where there’s so much conversation and discourse about what’s true and what’s authentic and digital malfeasance and computer hacking—all this stuff we’ve been bombarded with.”

I Wish to Say and After the Dinner Party

I Wish to Say, an interactive performance art piece Oring has been doing around the country since 2004, is perhaps her most well-known work. Oring sets up a booth with typists and asks the public: “What do you wish to say to the president of the United States?” The typists then take dictations from the participants and type a postcard to the president. They make a copy of the postcard for Oring’s archive and give the participant the original with the hope that they will mail it to the president.

When asked about the way audience interaction with I Wish to Say has changed since the election of Donald Trump, Oring responded that she has found that “the people who are the most critical sometimes don’t want to participate, like they are throwing up their arms and saying, ‘He’s not listening anyway.’ Then people that are supportive [of Donald Trump] are also maybe a little bit hesitant. It’s been more people who are in the middle who have been more likely to participate.” 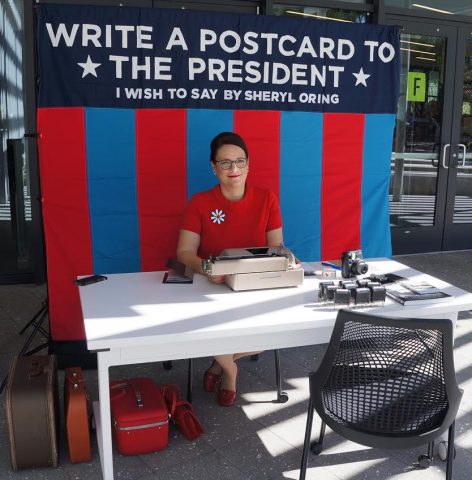 Oring set up to perform her I Wish to Say piece.

Oring also created an interactive performance piece specifically for “Agitype.” Entitled After the Dinner Party, the work is a commemoration of feminist artist Judy Chicago’s sculpture Dinner Party from the 1970s. The piece consists of three typists from the Sarasota community seated at a triangular-shaped desk as they record the public’s response to the question: “If you could be seated next to any woman at a dinner party, who would it be and why?” Those responses are then typed onto dinner invitations printed at the Ringling Letterpress and Book Arts Center and hung on the gallery wall to become part of the retrospective.

The oldest piece in the show, Writer’s Block, consists of 18 independent sculptures. Each sculpture is made of a single rusty rebar cage filled with typewriters from the 1920s and 1930s. Oring then places sheets of watercolor paper under the cages in order to capture the abstract compositions created by the interaction between the rust from the sculptures and the different environmental factors at play in each location the work occupies.

“These sculptures were first shown on Babelplaatz, which was the site of a Nazi book burning in Berlin,” Oring said. “In a way, they were the genesis of everything I’ve worked on since the time I created them in 1999.”

For Ormond, Writer’s Block is a work viewers can deconstruct for themselves through the process of questioning.

“If you come upon a wire cage in which there are dozens of typewriters—the typewriters are not accessible,” Ormond explained. “They’re no longer tools that can be used to communicate so just the very concept of the work, even upon first glance, is about how someone has silenced these typewriters.”

According to Ormond, the viewer is faced with a number of questions when interacting with Writer’s Block.

“Because it’s outside the gallery and all the cars that go by or anyone that walks by can see it, that piece really engages with the public at large,” Ormond said. “The question for the viewer is: ‘How old are these typewriters?’ And some of them are in foreign languages, so then you arrive at: ‘How did they get here?’ ‘Where did they come from?’ ‘Who used them?’”

The most recent work in the show is Agitype, a series of drawings that Oring is working on in response to the #MeToo movement and the Kavanaugh hearings. “There’s a quote from Dianne Feinstein that said: ‘The republican strategy is no longer attack the victim, it is also to ignore the victim,’” Oring said, describing one of the quotes she references in the series. “I took the words ‘ignore the victim’ and made them really large on a sheet of paper as a drawing—it looks a little like a newspaper headline.”

For Ormond, Oring’s work can be read as part of the larger trend of contemporary art and artists engaging with the issues of their time.

“If you are going to be a contemporary artist and you want your work to resonate, it needs to talk about the condition of being human in the moment,” Ormond said. “To me, this subject matter and this material that’s been created [by Oring] from 1999 to the present is about engaging in a discourse.”

“Agitype: Changing the World One Letter at a Time” will be on display at RCAD’s Lois and David Stulberg Gallery until Friday, Dec. 7. Admission to RCAD shows are always free. For more information about the show, visit https://www.ringling.edu/galleries.