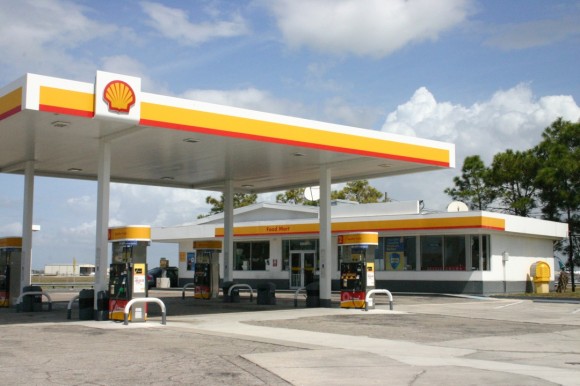 The nearby Shell station frequented by Novocollegians.

Just a stone’s throw away, the Shell gas station on the corner of N. Tamiami Trail and General Spaatz Blvd. is virtually a part of the New College campus. Like a grungy walk-in vending machine, the 24/7 store is often used to supplement a trip to the grocery store for hundreds of students on a regular basis, or, when desperate for gas, many a Novocollegian will fill up their tanks with some fine petrol courtesy of the Royal Dutch Shell (more often than not out of convenience rather than price). But what students may not know are some of the dark controversies that continue to plague the mega-corporation, most notably its alleged violations of human rights in Nigeria.

According to Forbes magazine, the Shell oil giant is the fifth largest public company in the world.  The company first started in 1912, selling gasoline along the Pacific coast and buying oil properties in Oklahoma. By 1915, it had one of the country’s first modern refineries, and a few years later the company’s success skyrocketed after its discovery of an enormous oil depository at Signal Hill, CA, which grew into one of the most productive oil fields in the world.

Nigeria is one of the world’s largest oil-producing countries in the world and for decades, Shell has been drilling in the Ogoni region of the Niger Delta. It was here in the mid-1990s when the real controversy began. Student, civic and religious leaders began leading peaceful protests against the company, which they claimed had been polluting the Delta and destroying their land and economy.

As reported by NPR: “Some environmentalists say as much as 550 million gallons (2.1 billion liters) of oil poured into the delta during Shell’s roughly 50 years of production in Nigeria — a rate roughly comparable to one Exxon Valdez disaster per year.”

Shell Oil allegedly aided and abetted the Nigerian government in quelling the protests with various violations of human rights.

After writer and activist Ken Saro-Wiwa, president of the Movement for the Survival of the Ogoni People, was executed in 1996, Huffintion Post reported that 800 Ogoni people fled their land for a refugee camps in Bernin.

According to havardhumanrights: “The ATS was passed as part of the First Judiciary Act in 1789 and allows non-U.S. citizens to bring civil suits in U.S. federal courts for violations of international law. An important body of law has developed under the ATS since 1980 to hold perpetrators to account for violations such as extrajudicial killing, torture, war crimes, and crimes against humanity.”

Many human rights victims see the ATS as a last resort when they cannot obtain justice in their own country.

“Nigeria gets so much money from oil,” Charles Wiwa, nephew of Ken Saro-Wiwa and party to the Kiobel lawsuit, said according to the Huffington Post. “There is no way the company will be held liable for anything in courts in Nigeria,”

The ATS specifies that aliens can sue but does not say who or what can be sued. Shell maintains that corporations cannot be held liable under this statute.

On Feb. 28, 2012, the lawsuit was heard by the Supreme Court, though they deferred their verdict to the Fall of 2012, in which time they will reexamine the case.  Their ruling may set a new precedent in corporate and international law.

Information in this article was taken from shell.com, npr.org, huffingtonpost.com and harvardhumanrights.wordpress.com.