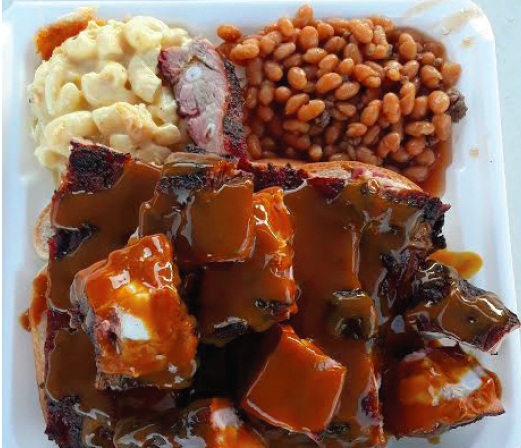 Many students have seen or smelled the renowned traveling barbecue smoker, “Shell-B-Q,” at some point during their time at New College. The family-oriented barbecue joint situates itself at the Shell gas station in front of the Sudakoff Conference Center. They sell classic ribs, baked beans, macaroni and cheese, collard greens and dirty rice.

Shell-B-Q has been in business at Shell since 2012, when the owner and cook, Sharde, decided to pursue a culinary venture. Sharde started cooking when she was seven years old. She followed her passion for cooking, which eventually led to starting her own cooking business.

“My husband loves barbecuing, so he was taught how to be a pitmaster and I just learned on my own,” Sharde said. “I also love baking.”

When it comes to the location of Shell-B-Q, Sharde was not focused on New College students as customers. Instead, Sharde had her eyes set on other sources.

“The airport is right there and [we’re] right in between Bradenton and Sarasota, so you get a mixture of different people that come in and out of here,” Sharde said. “A lot of people from the airport actually do come here when they get off the plane because there’s nothing to eat within so many miles from here.”

“So I have no set time until maybe I fall asleep ‘cause I be gettin’ tired,” she said while laughing.

While students only account for approximately one fifth of Shell-B-Q’s sales, the barbecue has become a part of New College’s culture. During the hurricane when classes were cancelled, second-year Anna Wright wrote a poem about Shell-B-Q on the Forum:

How smokey art thy delicacies

Though panic and Dorian pursue

Your sweet sweet meat will see us through

Some will feast down by the bay

But when water’s seeping into Pei

Your baked beans will sustain us.”

When Sharde was informed that students write poetry and share positive comments about Shell-B-Q, she was delighted.

“That’s exciting, like that’s good to know!” Sharde exclaimed. “I didn’t know that.”

Sharde is content with the success of Shell-B-Q and her familiarity with cooking and barbequing has definitely helped shape that success.

“And so we’re here and I ain’t going nowhere,” Sharde said with a smile.