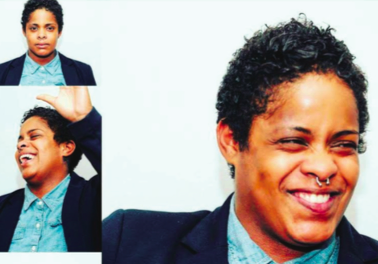 After an exciting and productive meeting of the Black Lives Matter chapter of Sarasota, Shakira Refos sat down at Growler’s Pub. In between greeting almost everyone who walked through the door, Refos enjoyed a beer and answered a few questions for The Catalyst. The 32-year-old Netherlands native spent much of her childhood in Florida, and after returning to the Netherlands to attend University of Applied Sciences in Utrecht, she moved back to Sarasota. Refos is active in creating spaces for young people as well as working as a freelance artist, promoter and advocate for old school hip hop.

After earning her teaching qualifications in the Netherlands, Refos returned to Florida to work with diversity efforts. She believed her efforts were much needed, since Sarasota is now predominantly a haven for elderly people. Growing up here, she knew that was not the only demographic and there needed to be places, activities and events for Sarasota residents that did not fit into the snowbird or retiree identities.

“I help starting non-profits get started and find their audience,” Refos said. “I freelance a lot and I just promote a lot.”

Refos could be defined as a renaissance woman for the millennium. She does a lot of jobs and they all take a lot of energy.

Refos attended Booker High School for the performing arts, and there is a lingering theatrical nature to the way she talks.

“I was able to be who I wanted to be,” Refos said. “[There] I discovered myself.”

Since Refos has lived in Sarasota for many years, she came across New College students who shared her interests. Although she did not attend New College she has many memories with the school.

“We used to crash [New College] parties all the time,” Refos said.

This familiarity with New College grew into other opportunities.

“Being an activist, being interested in social justice, I came across graduates who decided to stick around New College,” Refos said. “People are here [at New College]. People are woke and they are willing to talk about [important] things.”

“Right now I am involved with Black Lives Matter,” Refos said. “We have connected with the Black Student Union.”

Refos expressed that she was glad the Black Lives meetings are being held on the New College campus.

“There is so much work to do,” Refos said. “The more people that are involved, the more hands that we have, and the more people we have interested and willing to try and effect change, the faster we will be able to do it.”

The work is centered around providing information, education, and support to the black community in and around Sarasota. The projects in planning included summits, protest, farmers markets and fund raising.

“This is about empowering the black community,” Refos said. “I want them to be able to use their voices and be proud of their voices.”

Refos spends much of her time focused on issues such as police brutality, pay inequality, LGBTQIA rights and is a leader in the Sarasota Black Lives Matter chapter of Sarasota, but she also has fun. Refos host a throwback hip-hop night every Thursday and the Starlite Room in Downtown Sarasota. She believes that providing positive outlets for Sarasota youth includes social justice work as well as outlets for enjoyment. She has also been an emceeing for five years and has worked with the Harvey Milk Festival.

“It is my favorite event in town,” Refos said.

A  gay, hip-hop loving black woman may not be the first identity that would come to mind when thinking of Sarasota leaders, but that is exactly what Refos is.