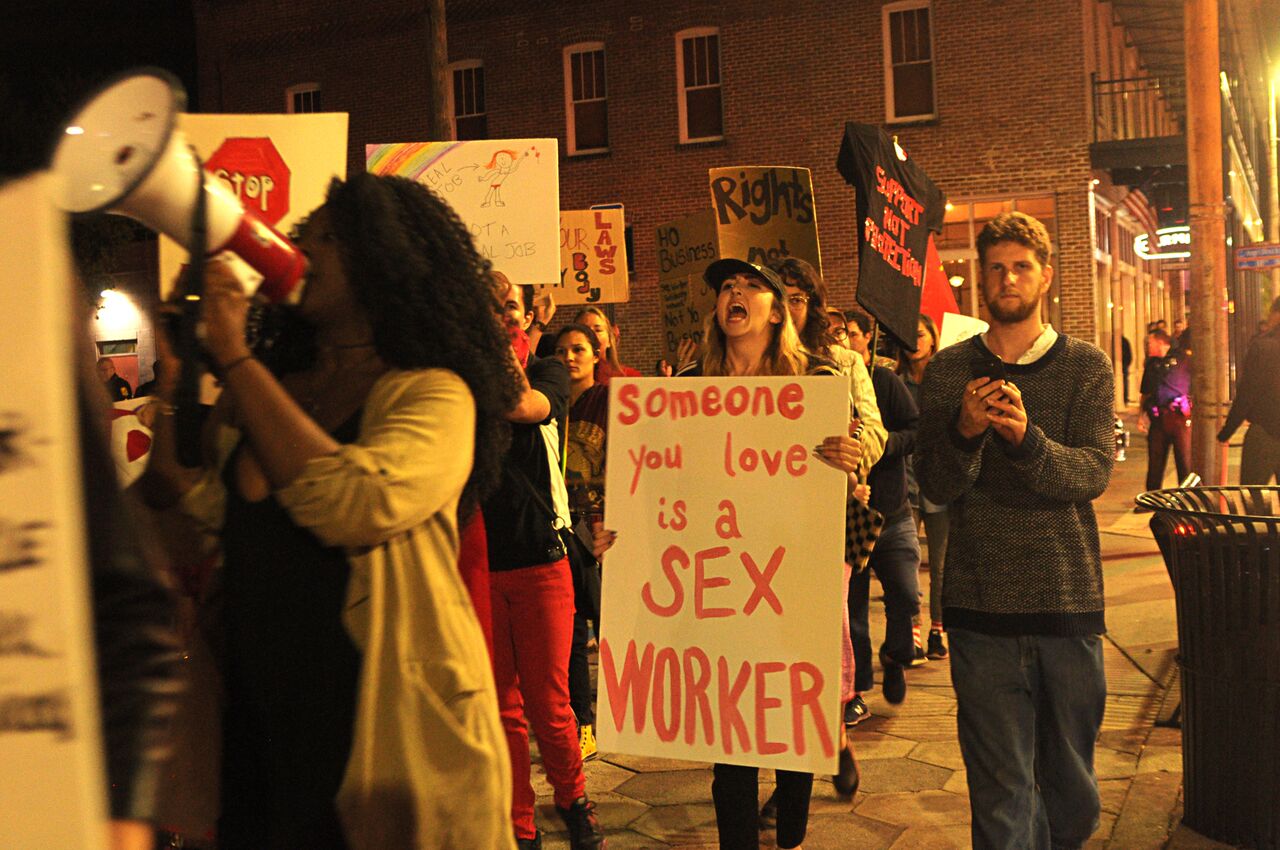 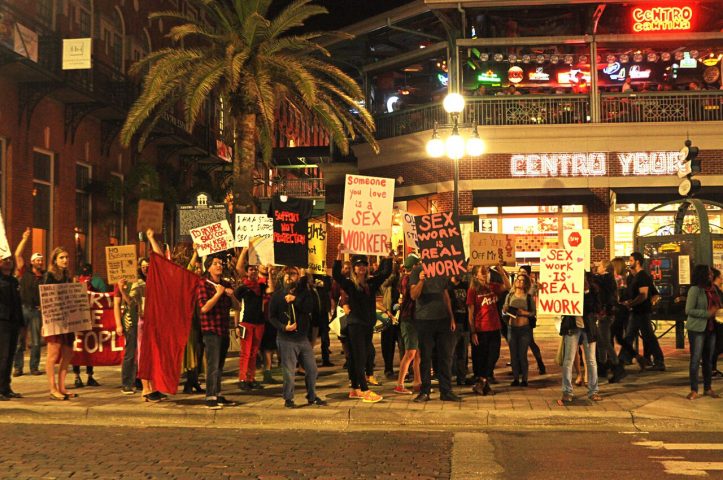 “One, two, three, four. I’m a worker and a whore! Five, six, seven, eight. Masterbate and smash the state!” Syd Eastman said, rallying the crowd that stood before her composed of sex workers and their allies.

Eastman founded the Sex Worker Solidarity Network (SWSN), a Tampa-based coalition formed by sex workers, consisting of sex workers and allies, that aims to provides safe spaces and resources for sex workers and information for the public in an effort against stigma and prejudice.

SWSN hosted the march in collaboration with Sex Workers Outreach Project Tampa (SWOP Tampa), Sarasota’s closest local chapter of SWOP USA, a national “social justice network dedicated to the fundamental human rights of people involved in the sex trade and their communities, focusing on ending violence and stigma through education and advocacy,” according to SWOP USA’s website. 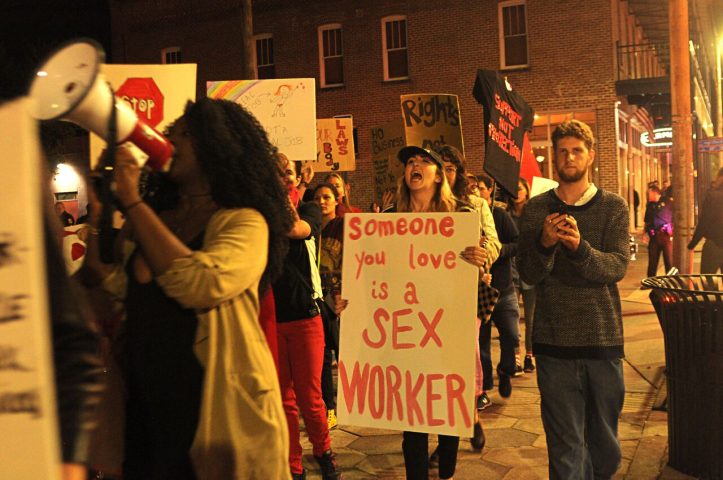 Sex work is equated to sex-trafficking in the U.S. by anti-trafficking groups and law makers, a dangerous ideology that endangers those who are trafficked and sex workers alike. (All photos courtesy of Michael Cruz/Coyoteheaven Photography)

Neither organization encourages people to engage in prostitution, but focus instead on harm reduction and the accretion of basic human rights for those already in the industry.

The group marched through Ybor’s main thoroughfare, 7th Street, for International Sex Workers Awareness Day. Mar. 3 has been celebrated by sex workers internationally since 2001 when the Durbar Mahila Samanwaya Committee, a Calcutta-based group intent on integrating the sex workers movement with the broader movement to establish rights of all marginalized communities in the globe, gathered 25,000 people from the sex work community for a festival in streets of India despite threats from prohibitionists.

Tampa has seen a recent crackdown on sex workers in the past few months by local legislators under the guise of sex-trafficking.

“Human trafficking is used as a code to do sweeps of sex workers,” Amber DiPietra, founder of SWOP Tampa, said. 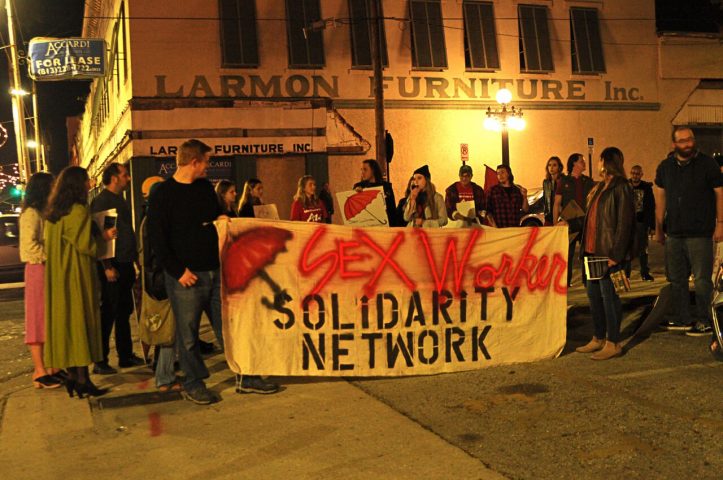 Protesters stopped in the middle of 7th street to share stories of their struggles.

Laws like Tampa’s “Bathhouse” ordinance, which was just passed in January, places strict restrictions on local massage parlors and spas, one of which is mandatory compliance with randomly conducted police raids four times a year. Those performing the massages would have to wear surgical gowns and masks and every client would have to sign into a registry, creating a surveillance system. Anyone who applied to work at the parlor with previous arrests would not be eligible. These massage parlors have existed for over 10 years on Kennedy Street.

The ordinance was passed in an effort against sex-trafficking.

“Caring for victims means believing them when they reach out to us, as opposed to our current model which interrogates them,” Eastman said. “Caring for victims also means allowing them to reach out. Under our current model, victims of all kinds of sex crimes simply do not feel empowered to reach out for help, victims of sex crimes in the sex trade are subject to arrest or ‘rescue,’ if they do.” 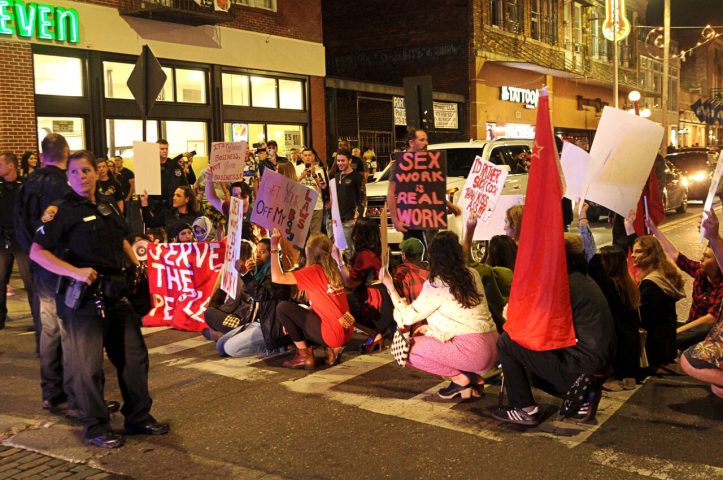 Surrounded by police, sex workers and allies block the road by sitting on the crosswalk.

The most vulnerable victims of sex crimes in this industry are often immigrants and Black women.

“It’s in important to note that Black women are arrested at twice the rate of White women for sex work, and that our anti-prostitution enforcement in Florida tends to target those of immigrant status,” Eastman said. “In Tampa, it’s long known that trans sex workers are at a higher risk of harassment and scrutiny by LEO [law enforcement officers].”

In the light of the mass shooting at Marjory Stoneman Douglas High School, Florida house representatives are also taking a stance on “sex-trafficking” by deeming pornography as a “public health risk” on the same day they ignored a bill that would have banned assault weapons and large-capacity magazines.

“If you took a different tact and really looked at where pornography could go: showing healthy and diverse types of sexual behavior, it could be a really positive social force,” DiPietra said. 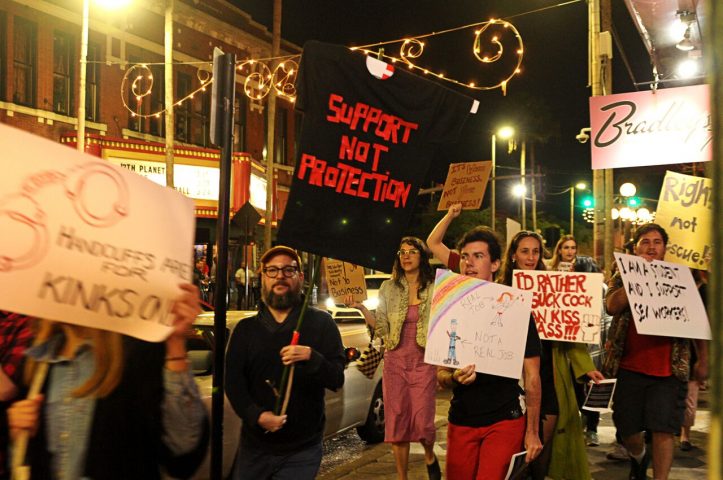 Protesters marched through the streets of Ybor at 11:00 p.m. to spread awareness of the injustices sex workers face everyday.

Regarding prostitution, Eastman said, “We fight for decriminalization because at the end of the day, we can not tell consenting adults what to do with their bodies.

“Legalization has a different but similarly harmful effect on most sex workers. It creates a whorearchy so to speak.”

The “whorearchy” Eastman speaks of is internalized prejudice against sex workers within the community. Both legalization–through hyper-regulation–and criminalization creates this dynamic, according to DiPietra. 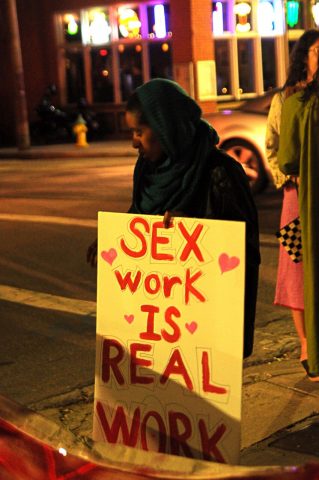 “It’s about money and class and trying to get on the right side of the stigma, where you feel exempt from the stigma because you’re not X type of sex worker,” DiPietra said.

Anti-trafficking groups such as Selah Freedom have a different stance on sex work and sex-trafficking.

“When I talk about trafficking and prostitution, that’s the purchase of sex,” Swink said.

As a result, they support legislation that is anti sex-work as well as anti-trafficking. Swink was not aware of the march for activism on Mar. 3 held by SWOP & SWSN.

In the current sociopolitical climate, those who perform consensual sex work are seen as criminals or victims, and this often strips them of their rights.

When asked if there were any sex workers involved in the founding of Selah Freedom, Swink replied, “There is a large percentage of, not only the volunteers we work with, but staff that we work with, who have experienced sexual abuse and molestation.”