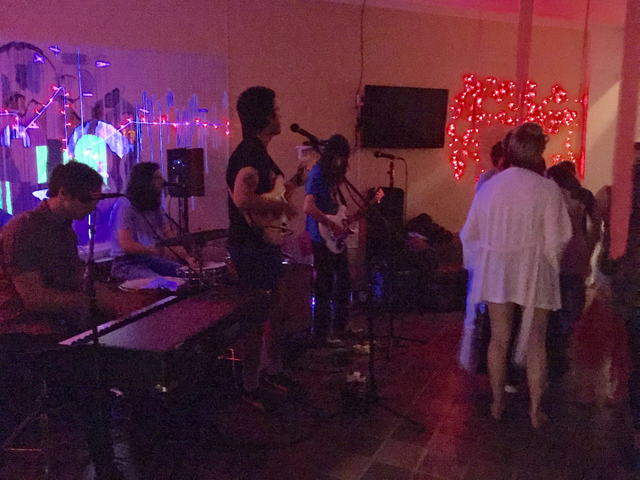 Two months after New College students voted for Seven Deadly Sins to be the theme of the February Center Of the Universe Party (COUP), the hosts, first-years Emily Via and Austin Gray and second-year Sarah Cohen finally saw the fruits of their labor pay off.

Former Speaker of the Towne Meeting McAlister Grant (’12) originally suggested the theme. The hosts were in competition with two other themes to host COUP in December when the poll originally went up. It won with roughly a 300-point lead (students assigned 3, 2, 1, or no points to the options based on their preference) on Dec. 7.

On the night of COUP, Feb. 20, students and guests alike wandered between Palm Court and Ham decked out in colorful outfits representing different sins. One person was covered in candy jewelry, representing gluttony. Another, wearing a gold bikini and a thick faux fur cape, was representing greed. Others wore provocative outfits revealing ample amounts of skin to represent the titillating sin of lust.

“I wanted [COUP] to be something very cohesive across campus – to have that New College charm, things that are hand-made and hand-done,” Via said of planning COUP. “One of the coolest things I made were these giant fake lollipops for gluttony.” Those lollipops did make their way around campus on COUP night in the hands of several students.

“I handled exclusively the BBT,” Via explained. “The lust-rave space. And then Sarah handled the chill-out room. There were other things – we all worked on Palm Court and the Old Mail Room.”

Each space had a sin associated with it, and Via gave a run-down of each of them: the old mail room was wrath. The Black Box Theatre (BBT) was lust. Ham center represented gluttony, with tables loaded with food and drinks for party-goers, and the Ham tables, decorated as casino tables with chocolate poker chips, represented greed. The Nook, with a photo booth area and tripod for anyone’s use, represented pride. Palm Court, decorated in green string lights and balloons, represented envy.

“One of the biggest changes that happened was that in McAlister’s original proposal, he wanted to put lust in Palm Court and make it a KYC-type thing,” Via said. KYC, or Kiss Your Crush, is a popular wall that is held at the beginning of the fall semester yearly, with attendees donning green, yellow or red to indicate their interest in being kissed. Students ask each other for permission to exchange kisses. “We decided to scrap that entirely because of the nature of COUP, and how many people can’t consent, that was one of the biggest concerns whenever the theme was proposed.”

The alternative, moving lust into the BBT and turning it into a rave, was aided by alum Sean Patton, who Gray cited as a major help in decorating the BBT.

“Lust was pretty low cost, because a lot of stuff was donated to us by Sean Patton. He really helped a lot,” Gray said.

Patton may have helped in the BBT, but in other spaces help was less easy to come by.

“The original idea was to get try to get seven people [as hosts], one for each sin, to plan an area,” Gray said. “We ended up getting about five, and then by the end of it, it was only us three because two had to drop out for personal reasons.”

“We did have some events for constructing things,” Via said. “Sadly not that many people showed up to the events. It was mostly us.”

Via said living in B-Dorm was convenient, “I have been corralling the people of B-Dorm because they’re all very artistic.”

“I’ve been working on the backdrop for the photo booth and it’s splattered in red paint and smaller things, and there’s some stuff I still have to paint today,” she said, the day before COUP.

One thing that caught Via off guard was “how involved it is. And kind of realizing the night of that you can’t really party,” she admitted. “You have to be able to talk to Vanessa Van Dyke.”

“We’re trying to aim for the success of the last COUP,” she said. “I don’t think a single ambulance was called last time, which I found beautiful, so I would like to keep that tradition going and make sure that people stay safe. I’m thinking we’ve done enough and educated enough people that we’re going to make sure that everyone stays safe. That’s my priority.”

Working towards student safety was a main goal of the Students for Sensible Drug Policy (SSDP), who contacted the hosts about volunteering for COUP. “SSDP has been very helpful. They’re doing the fairies again,” Via said. SSDP members have volunteered to dress as fairies and provide water and other resources to COUP attendees for the past several COUPs, wandering around the event looking for anyone who may need help. They also manned the chill-out room, a calm space where attendees could go to lie down and relax if needed.

Making sure there were adequate resources, such as drinks and snacks, took up a significant chunk of the budget. “I think pretty appropriately the most money was allocated to gluttony to buy food,” Gray said. More than $600 of the $2,000 budget allocated to COUP was spent on food, with the biggest chunk of it – approximately $250 – going toward sushi.

The biggest expense in the budget was live music, with $400 going to paying bands that performed live in the Old Mail Room. Although most bands consisted of students and alums, two were not. Local band Sailor Ripley plays frequently at the alum-owned Nothing Arts Center, and the band Sunseeker, signed onto musician Jack White’s label, were brought to New College by second-year Ava Howard.

“Lust wasn’t as expensive because it was mostly student DJ’s,” Gray said.

“I’ve been saying that the key to having a good COUP is making sure that there’s good music,” Via said. Via, Cohen and Gray listened to samples of each live band and DJ set before approving them for one of the six time slots – an hour each from 10:00 p.m. to 3:00 a.m. – in the Old Mail Room, BBT and Palm Court, another DJ-run location.

“I was given advice by the last COUP sponsor, Logan,” Gray said, referring to thesis student Logan Starnes, who was part of the team that threw Something Wicked This Way Comes COUP last November. “They said it was very important to set dates to do things, which I found to be very true. If you don’t set a date, it will be up in the air and nothing will get done.”

Although most of the construction and preparation was done by Via, Cohen and Gray, there were a few student volunteers. “We only got a few [volunteers], but I appreciated the ones that came,” Gray said. “Clean up, there were even fewer volunteers, although I did hear people were volunteering at the end of the night. But in the morning everyone was passed out in their rooms sleeping, so it ended up just being like, me and Emily and my girlfriend Erika Johnson, and a couple more friends.”

Gray admitted that throwing COUP was stressful and a lot of hard work. “I would maybe take a minor job on someone else’s team,” Gray added about the possibility of hosting COUP again, “but as far as the involvement I had in this one… It was a good experience, but one I’m not looking to repeat anytime soon.”

Cohen enjoyed being a part of a young COUP organizing group. “At first I was a little worried about letting first-years organize a COUP, especially when they’d only experienced one before. But it turned out great, so I’m satisfied, and I hope everyone enjoyed it.”

As for Via’s standards for a good COUP, the night appeared to be a success: no EMS was called at any point throughout the night.