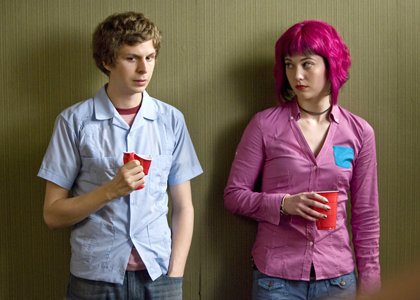 A fast-paced whirl of quick humor, comic book word art and video game action sequences exploded before my eyes as I attended my first screening of Scott Pilgrim vs. the World. An homage to 8-bit arcade games and rock music, the movie embodies my 10-year-old thoughts as I got to the bonus round of my Zelda game: awesome.

The film depicts Scott Pilgrim (Mi- chael Cera), a 22 year-old Canadian bass- ist and his band, Sex Bob-Omb. When Scott meets Ramona Flowers (Mary Elizabeth Winstead)—the girl quite literally of his dreams—he falls in love instantly. Like most movies, however, there’s a catch to their relationship, but unlike most teen or romantic comedies, the catch is noticeably unique:

“If we’re gonna date,” Ramona explains, “you may have to defeat my seven evil exes.”

And so begins the premise for a plot riddled with video game humor, Street Fighter-like fight scenes and, of course, dating and breakups. The League of Evil Exes one by one challenge Scott to a duel to the death. In order to stay with Ramona, Scott must defeat them all.

Scott Pilgrim breaks all ties to conventional movie format with a completely unique style. Based on the graphic novels by Bryan Lee O’Malley, the movie uses a barrage of comic book characteristics that give a fun, charged, colorful tone. Comic-like text and graphics float in the back- ground. When Scott defeats his enemies they turn into piles of coins and his score tally is shown. Like a comic book, the movie jumps from scene to scene twisting its way through reality and various flights of fancy. A good balance seemed to be made between the real world and the surreal comic book aspect of the film—which doesn’t take itself seriously. The action scenes can only be described, and pardon my journalistic liberties, as kick-ass. I report facts kids, get used to it.

The fight scenes were over-the-top, thoroughly entertaining arcade game brawls that simply turn on your brain’s pleasure center. It’s pixie sticks for your eyes and ears.

The movie is culturally relevant and seems to reflect much of today’s youth culture.

Music plays a huge part in the film. Sex Bob-Omb, Scott’s killer garage band, competes in battles of the bands and even fights off a few of Ramona’s evil exes with the sheer power of rock. Quite a few mod- ern bands and musicians made an appearance in the soundtrack, including Beck, Broken Social Scene and Metric. Beck, interestingly enough, wrote and recorded all the original songs for Sex Bob-Omb.

“…[T]heir [Beck’s] idea was to kind of record on eight track, make it like a demo and not really kind of produce it that much,“ said director Edgar Wright. “You can hear the drum rhythm changing constantly because they were just kind of riffing and experimenting.”

The “unproduced” songs give Sex Bob-Omb an authentically upbeat garage band sound. Scott’s energetic band gives the audience a chance to live the teenage fantasy that adolescent rock bands are all about.

While the movie may seem overly ridiculous at times, it nevertheless holds an underlying message about love, breakups and relationships. The sentimental scenes, the heart breaks, the awkwardness of dating make the funny scenes that much funnier. They give the movie a grounded plot that supplements the entertaining ride.

This film presents a fresh idea in an entirely quirky and creative way. If you enjoy good music, video games and clever humor, drop this article, buy some pea- nut M&Ms and go to the nearest screening immediately.