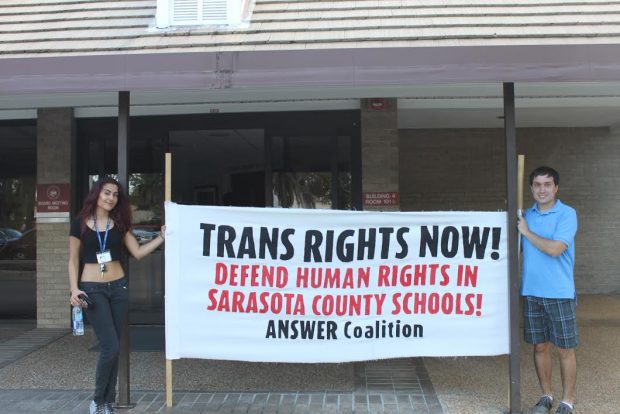 Since January, the Sarasota County School Board has stalled in its decision to allow transgender students to use the bathroom of their choice. On Sept. 6, community members gathered in a room before members of the School Board to once again demand justice for transgender students of Sarasota County schools. This is the twelfth board meeting since January that has concerned transgender rights but has not secured, or taken away, any.

Bear Mancinni, a 12-year-old Boy Scout, was the first to speak on the issue during Hearing of the Citizens. He has spoken at several school board meetings in the past but on different academic issues. He attended the meeting on Tuesday to address the bathroom debate. In his speech to the board he said, “[The school board’s] silence has become more than complacent; it has become complicit. Students suffer from your refusal to act. I am disappointed in you.”

People around the room raised their hands and shook them in the air, a modified “jazz hands,” because clapping is not allowed at the meeting. “This is more than a bathroom issue,” Mancinni continued. “It is a human rights movement. We, the future, are watching you make history. Will we be witness to your decisive leadership? Will you be known for your courage? Give us a reason to believe in you. We are your students. What will you teach us?”

Several others followed Bear’s speech, all proponents of an inclusive bathroom policy. Parents of transgender children, concerned community members, a transgender woman and the Program Coordinator from ALSO Youth, Molly Swift, also spoke on the issue. All cited their frustration at the board’s inaction to settle the issue and several specifically called for the board to vote.

After everyone had spoken, Shirley Brown, Chair of the School Board, said that the board could not vote because a vote was not on the agenda. In addition, they could not add anything, like a vote, to the agenda during the actual meeting. As everyone filed out, frustration and sense of hopelessness could be felt. This was no surprise to many of them.

“Often they’re [the school board] making decisions to not make decisions,” Swift said when asked if she was surprised by the outcome of the most recent school board meeting.

Perhaps Bear explained the root of the frustration best when he wrote in an email interview with the Catalyst: “Transgender people don’t even need anything, just to be left alone so they can pee in peace! It’s so obvious! And I’m 12 and it’s a no brainer! I’m sorry, but duh!”

In an email interview with the Catalyst, when asked if she saw the issue coming to a vote soon Brown said, “Most board members are reluctant to vote on a policy as we feel it will be challenged in court as our competing policies in this state currently are.” She continued, “I feel it is better handled on a case by case basis with administration, the student, and their parent(s) or guardian.”

The issue brought before the board last Tuesday was originally introduced by Nate Quinn, a transgender man and former student at Pine View School (Quinn graduated in June). After asking Stephen Covert, president of Pine View School, permission to use the men’s restroom twice, Covert relented. On Jan. 15, Covert sent an email to the parents of Pine View School announcing that Pine View would be the first public school in the region to allow a transgender student to use the bathroom of the gender they identify with. Covert acted independently as the county does not have a policy for this issue.

In a phone interview with the Catalyst, Molly Swift mentioned that Quinn reached out to Answer Suncoast, a regional chapter of a national civil rights organization, for help with bringing the issue to the school board. She added that the school board has been aware of the issue with transgender youth using the bathroom of their identified gender but “now they can’t ignore it” due to Quinn’s catalyzing action.

When asked what she foresaw next in the transgender rights issue involving the school board’s inaction Swift commented, “Even though there hasn’t been a policy change it doesn’t mean we can’t make progress.” She believes the school board will wait to act on the issue until they see how other lawsuits around the country play out.

Information for this article was gathered from www.sarasotamagazine.com