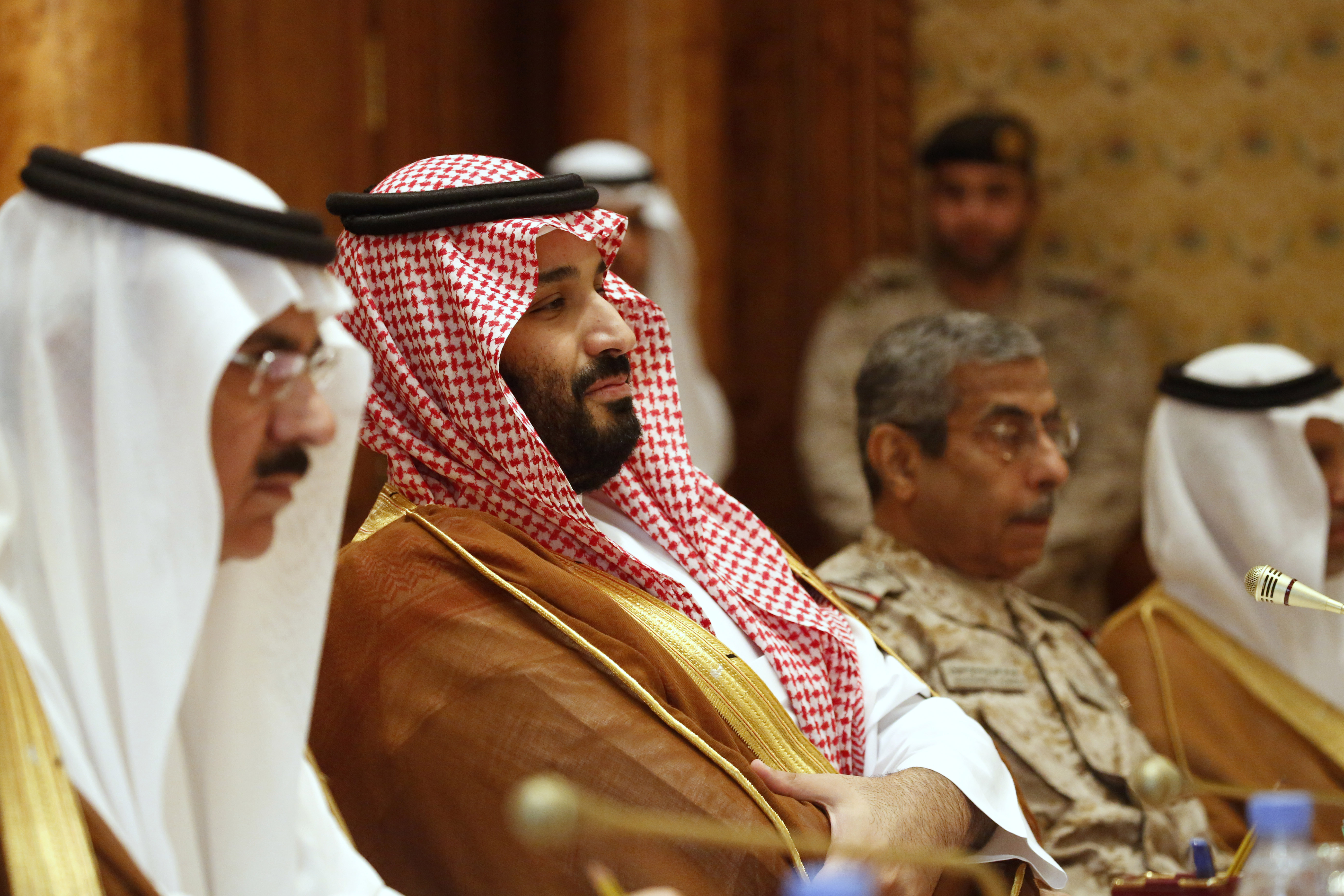 An estimated 500 people of high ranking authority within the Saudi family and regime were detained in the Ritz-Carlton hotel in Riyadh-Saudi Arabia’s capital city, beginning on Nov. 4, 2017. The next day, eight Saudi authorities died in a helicopter crash with no public statement as to the cause of the crash. There has been a radical movement in a highly-geopolitically significant middle eastern nation. The newly consolidated authority of Saudi Arabia is rebranding.

$800 billion of detained Saudi elite capital has been seized by the Saudi government, according to The Economist on Nov. 7, 2017. The sudden strike on the Saudi elite coincided with beorgening ruler, Prince Mohammed bin Salman’s (MbS) creation of an anti-corruption committee in the first days of November. MbS and their most trusted agents are the only people to enter or leave the luxurious hotel containing the detained elite.

The Federal Intelligence Agency of Germany (BND) released a memo in January 2015 detailing King Salman and his son Prince Mohammed bin Salman’s burst to intervene in foreign influence and consolidate domestic politics, noting that, “Saudi Arabia is losing confidence in the United States as a guarantor of Middle East order. Riyadh appears ready to take more risks in its regional competition with Iran.”

The report was rebuked days after by the German government to step in line with France’s engagement in fighting Assad in Syria–which depended and still depends on Saudi-led groups.

The U.S. deep-state’s most recent battle with Saudi Arabia came with an attempted coup in Qatar, a small sovereign, oil-rich, nation on the Arabian Peninsula. Saudi Arabia and their coalition of other Arab nations officially declared a blockade on Qatar in June of 2017–officially declaring that Qatar had been working too close with terrorist groups.

“The CIA blocked the coup in Qatar and the Saudis reacted by dumping the CIA-selected Mohammed bin Nayef, who was to be the next king,” a Saudi insider told Asia Times (AT) in July of 2017. “The Saudis are scared. The monarchy is in trouble, as the CIA can move the army in Saudi Arabia against the king. [The purge] was a defensive move by MbS.”

“Prince Alwaleed’s arrest is likely to reverberate across dozens of companies that count on the investment company that he founded,” CNBC reported.

Other big names detained also include Prince Bandar bin Sultan, a former Saudi ambassador to Washington and confidant of former U.S. president George W. Bush, according to Middle East Eye. Bandar bin Sultan, nicknamed “Bandar Bush” by the Bush family, was wrapped up in the infamous ‘28 pages’ on the Saudi-led attack on New York City in 2001, according to CNN.

Mohammed bin Salman asserts his reforms are stark changes, but his Vision 2030 program is dependant on old plans based on Saudi oil. The November purge came from the will of Mohammed bin Salman, who vowed to investors days before the purge that he aimed at uprooting corruption and ending Saudi Arabia’s dependence on oil exports. The projected 2018 initial price offering (IPO) of Saudi Aramco–officially valued as the highest IPO in history at $2 trillion–is slated to initially earn the Saudi regime $100 billion. Saudi Aramco is a nationalized petroleum and natural gas company. Salman’s regime plans to fund the modernization of Vision 2030 by becoming a “financial powerhouse”–an allusion to the Aramco IPO–according to Al Arabiya, Saudi Arabia’s state sponsored media outlet.

Opting to financialize the oil company signals that the Saudi regime is seeking more profit than the plain ole’ petroleum can supply. The real economy is not providing the significant gains Saudi Arabia once enjoyed.

The Saudi Aramco IPO is merely another consecutive stepping stone in the quest to milk its oil rents for geopolitical and economic control. Like all trends in financialization, economic growth comes with higher systematic risk. A financial crisis can be as devastating as physical violence, something the Saudi regime has good practice in.

The tragedy in Yemen and Saudi knack for disruption

The U.S. and Saudi Arabia are going through a rough patch in their relationship because of the increasing voluntary extremism on behalf of the latter in desperation to hedge against falling oil prices and regional competition with Iran. The strained relationship is also coming at a time where both states are more indebted than ever from the endless wars they both fund together–the most significant being fought in Yemen and Syria.

“For two-and-a-half years, the U.S. government has backed Saudi Arabia’s intervention in Yemen every step of the way,” The Intercept reported Nov. 20, 2017. “The United States has dispatched warships to reinforce the blockade. It has refueled Saudi planes, sent the Saudi military targeting intelligence, and resupplied them with tens of billions of dollars worth of bombs. The conflict in Yemen has left, 7 million people facing starvation and another 1 million infected with cholera.”

“Some of us thought, perhaps, we could, with a more robust, covert action try to vet, identify, train and arm cadres of rebels that would at least have the firepower to be able to protect themselves against both Assad and the Al-Qaeda-related jihadist groups that have, unfortunately, been attracted to Syria,” then-Secretary of State Hillary Clinton said at an event for Goldman Sachs in 2013.

“That’s been complicated by the fact that the Saudis and others are shipping large amounts of weapons—and pretty indiscriminately—not at all targeted toward the people that we think would be the more moderate, least likely, to cause problems in the future, but this is another one of those very tough analytical problems,” The Intercept reported in 2016.

It is unclear where middle eastern militant groups acquire funds or weapons at any given time, but it is clear that a general influx of firepower from regional authority centers manipulates the violent volatility. Furthermore, the U.S. ardently helps the Saudi regime while turning a blind eye to their role in arming militant groups which are likely to ‘cause problems in the future’.

Saudi Arabia and Israel versus Iran

On the same day of the initial Saudi purges–Nov. 4–“Yemen’s Shiite [Houthis] rebels fired a missile at the airport in Riyadh on Saturday. The Saudi-led military coalition fighting the [Yemeni] Houthis said the attack could be considered ‘an act of war against the kingdom of Saudi Arabia.’ It was intercepted by Saudi air defenses, though the explosion shook homes and could be heard in the capital of about 6.5 million people,” Bloomberg reported. This missile was the farthest militia munitions have entered Saudi airspace.

Picking sides is a sign of war. Israeli and Saudi cooperation-amidst recent violence from Hezbollah, an Iranian-backed Shi’a political party and militant group of Lebanon-has blossomed. The cordial nature between Israeli and Saudi interests is surprising, considering the official claim to be at odds with one another. Combating Iranian militant groups in Lebanon is something Israel and Saudi Arabia want. The Saudi regime encouraged the Lebanese Prime Minister, Saad Hariri to resign–on Nov. 4 2017–for getting to close to Hezbollah coalition parties in their own sovereign government.

War between Saudi and Iranian forces would be catastrophic for the world.

“The major OPEC oil producers, all abutting the Persian Gulf, export almost 20 percent of the world’s oil supply through the Strait of Hormuz, which connects the Persian Gulf to global markets. The strait, a mere 34 miles wide at its narrowest, sits pinched between Iran to the north and Oman to the south. Were a war between Saudi Arabia and Iran to erupt, this chokepoint could easily be closed,” CNBC reported, “with consequences which would be severe and immediate for the global economy.”

The middle east is a tinder box. The world’s big actors are tied up in a knot that appears to be in a volatile spin-out. What is more troubling is that the structures of the ‘free world’ (i.e. international financial markets or the United States) are not reasonable mediators for the mess in the middle east. They are a part of the mess itself.