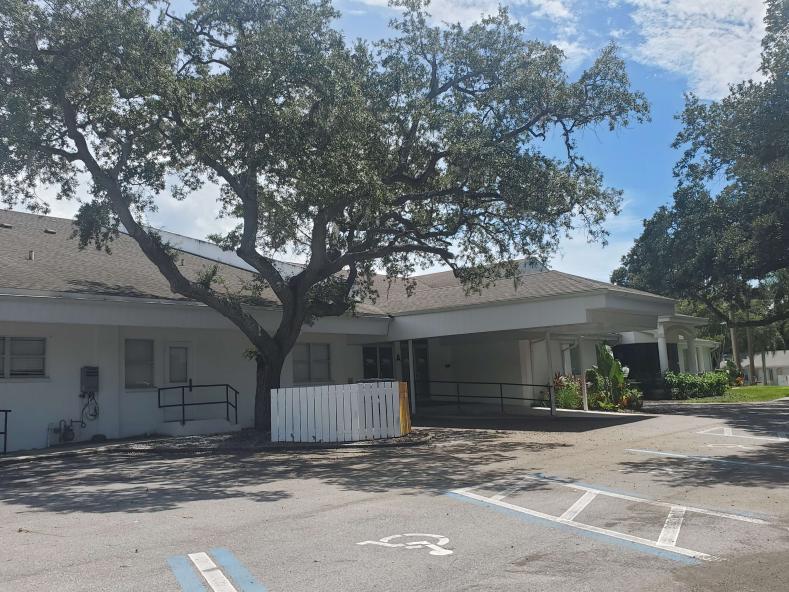 Photo of the Sarasota Polling location closest to New College, located at Light of The World International Church directly across from Sarasota Jungle Gardens. Less than 5 minutes away from campus. Photo courtesy of Basil Pursley.

Nov. 8 is the national midterm election–a date that New College students have the unique opportunity to make democratic change in a county which has been making national headlines.

The Proud Boys are a far-right extremist group, one which was allegedly heavily involved in the elected school board members’ campaigns.

While the school board members continue to deny any connection to the extremist group, it is undeniable that Sarasota’s school board is in the national spotlight. On Sept. 4, NPR ran a piece on how Florida Governor Ron Desantis and specifically Ziegler are pushing for a national change in school board races. Whenever DeSantis’ education plan is brought up in the media, Ziegler’s name usually isn’t far behind.

Ziegler in particular has garnered national recognition, both through her endorsement from DeSantis and involvement with the founding of Mom’s for Liberty, a national organization which focuses on a “parent first” approach to schooling and has endorsed both Ziegler and Enos.

Now that the school board positions have been decided on, these three individuals will have immense power over what can be taught in Sarasota K-12 schools for their terms—but the midterm brings with it new opportunities to shape democracy in Sarasota.

But why should Novo Collegians be concerned about Sarasota politics?

“If you care about how you live, if you care about your future, really if you care about anything in society, there’s a political element to it,” says Antunes. “If you’re not paying attention to politics, you’re basically opting out of one of the key ways that you impact your community, your country, your state, the world.”

Antunes has been working in the trenches of Sarasota politics for the past decade, and has even run for office herself. Now, she regularly reports on the political happenings in the community on her show The Detail on Sarasota’s local radio station, 96.5 WSLR.

Antunes explained that it’s usually in the “later stages of life where people run for office,” and that more often than not, it’s the older generation which pays more attention to politics.

“The reality is, we’re making decisions that are going to be far more important for young people than for us,” Antunes expressed. “It’s really time for that to change. Because the decisions happening now are so momentous. Things like climate change, women’s health care, everyone’s health! What’s happening with our economy? Moreover, we need all hands on deck for – you all that is really going to be important. You’re going to be living with these outcomes.”

Antunes also explained that New College students have a particularly unique opportunity within Sarasota when it comes to politics.

“This is the cradle of the insurrection,” Antunes said. “This is one of the hotspots in the United States, where people were encouraged to go to DC and attempt to overthrow the government to stage a coup to disrupt a lawful legitimate election.”

By insurrection, Antunes is referencing the Jan. 6 attacks on the capital. She expressed that Sarasota should be particularly interesting to history and political science students, as this is a location where national history is being made.

“If you want to see the attitudes and beliefs that lead to what we’re dealing with now, boy, Sarasota is the place, man,” Antunes said. “There’s a lot to learn by watching the local government and a lot to gain by smart, engaged students participating. That’s why we need you to participate.”

Of course, the easiest way to get involved is to vote and vote informed.

Antunes recommends that New College students get to know their local grassroots candidates, and even invite them to speak on campus.

Antunes also says not to be limited by party affiliation, saying “there are real grassroots candidates on both parties.”

“One of the things that I think is incredibly overlooked is local elections,” says Antunes, “They’re the place where leaders are shaped, they’re trained, they go on to higher office.”

By being involved in local elections, Antunes believes that voters are making a real effort in determining who will be the true leaders in the United States.

Voting in Sarasota is a lot easier than many New College students may think. In fact, Student Activities and Campus Engagement (SAUCE) Director of Civic Engagement, Jada McNiell— has worked with TurboVote, an online platform meant to assist voters with registering, checking their registration and registering to vote by mail.

TurboVote also gives New College students specific assistance with registering to vote on campus by providing them with the exact address of each of the residence halls.

McNeil also specified some paid positions on campus for students looking to get involved with civic engagement.

“We do have campus vote project fellowships,” McNiell said. “We have two spots still available for students to apply for—it is a paid opportunity with the Campus Vote project. You will be doing nonpartisan work on a peer to peer level.”

McNiell explained that Campus Vote Fellows will be engaging with their fellow students, making sure they are registered to vote and helping peers come up with voting plans.

She also encourages students to plan to vote together.

“You can make it like a fun trip!” McNiell said. “Just to ensure you have your safety net, and you can feel comfortable.”

She said that a lot of the barriers for voting from students usually boil down to being uncomfortable at the polls or not having transportation. Carpooling with friends is a great way to counteract this.

The deadline to register to vote for the Midterms in Florida is Tuesday, Oct. 11.

In order to check, change or update voter registration, students can go to one of the below sites: