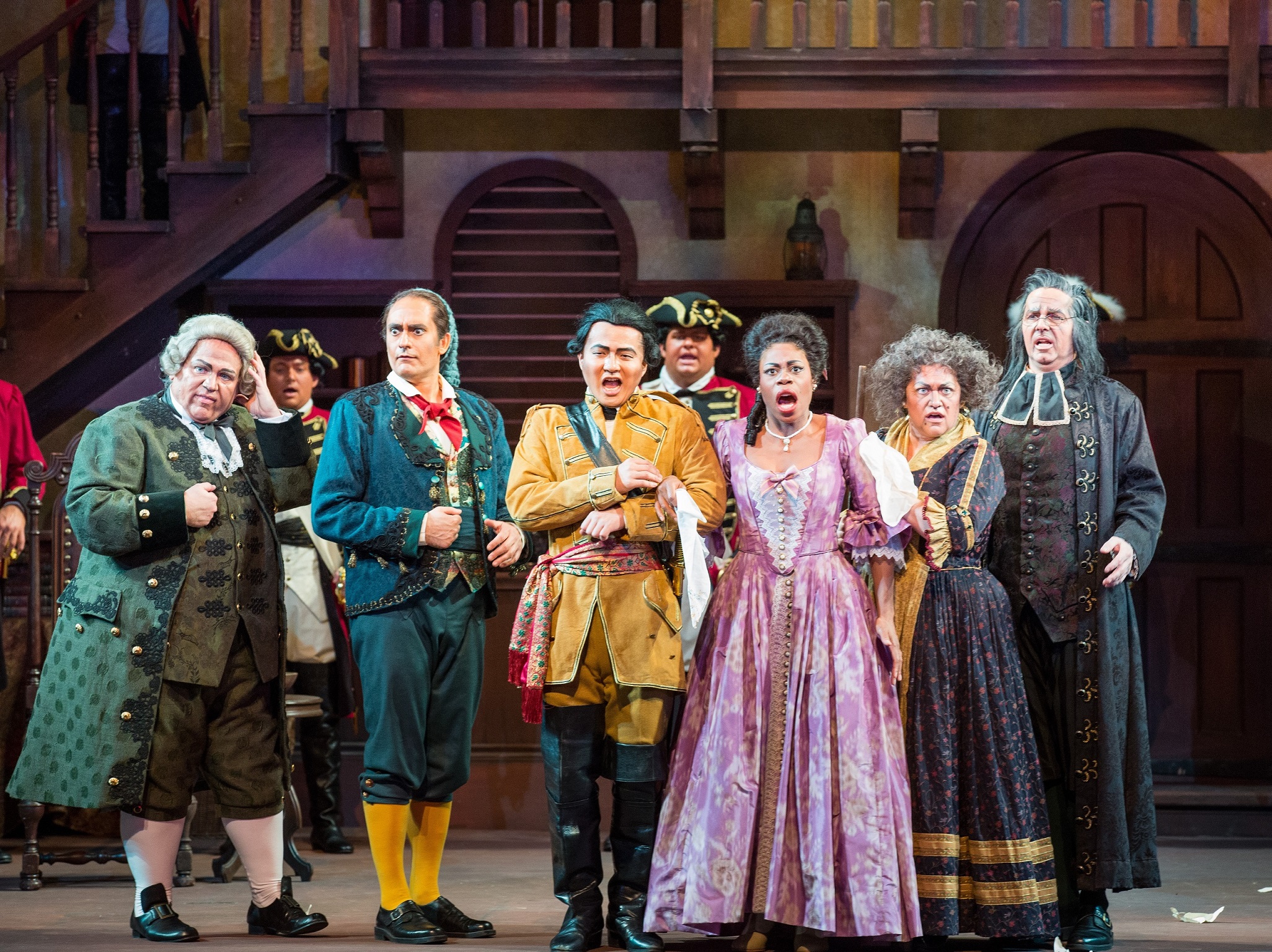 Sarasota Opera kicked off its fall season this week with three performances of Gioachino Rossini’s The Barber of Seville. The upcoming performances will take place on Thursday, Nov. 8 at 7:30 p.m. and Sunday, Nov. 11 at 1:30 p.m.

“The Barber of Seville is a great intro opera for anyone,” Garrett Obrycki, who will be singing the role of The Official in Barber, said. “It’s a good ‘after-dinner-and-a-glass-of-wine’ kind of opera because it’s so funny. When people hear opera for the first time they think, ‘Oh, it’s going to be really sad and someone’s going to die on stage,’ but this is like the exact opposite of that. It’s super funny and all over the place.”

The Barber of Seville is an opera buffa, or a comedic opera sung entirely in Italian. An example of the bel canto style of Italian opera, Barber first premiered in 1816 and has become one of the most widely performed opere buffe. The show is entirely sung, with no dialogue in the over three hour long performance.

“There are arias and duets and trios where people are singing and it’s very fluid and then there are these moments called recitativo where it’s like speak-singing,” Obrycki explained. “It’s more quick-paced, but it’s still scored by the orchestra or the harpsichord. What happens in those moments is that the plot propels a little bit quicker, and then in the actual songs, in the arias, they sing about how they feel about what is happening. There is a distinction between the two and you’ll absolutely be able to tell the difference.”

Supertitles are projected onto screens above the stage so that non-Italian speakers can follow the lyrics and plot.

“It’s a wonderful first opera to see mainly because a lot of the tunes that you will hear throughout the opera are very mainstream,” Anna Mandina, who will be singing the role of Berta in Barber, said. “It’s an opera that is often used for different sound bites and movies and commercials so it’s very recognizable audibly.”

Once a year, the Sarasota Opera Board of Trustees hosts a special reception and invites local college students and faculty to talk about the show, introduce some of the cast members and impart their love for opera onto some of Sarasota’s younger residents. This year’s event will take place as part of the Nov. 8 performance of Barber, with the reception at 6 p.m. followed by the show at 7:30 p.m. College Night is a youth-outreach initiative spearheaded by retired college professor and current Sarasota Opera Board of Trustees member Dr. Rosanne Martorella.

“As a college professor, I always tried to engage my students in attending a museum or performance,” Dr. Martorella said in an email interview. “No doubt, if you’re exposed as a young person, you are more likely to attend and support the arts as an adult. This is the only way to insure the survival of the arts for the future, and they are the basis of our humanity.”

For those who have not already reserved their place at the College Night reception and show, student and faculty rush tickets will be available the night of the show for $10. Rush tickets are available for every Sarasota Opera performance throughout the season, except for those shows that have been sold-out prior to the night of the show. Rush tickets become available 30 minutes prior to the start of a performance and cost $10 for any student or faculty member with a valid college I.D. In addition to rush tickets, Sarasota Opera has a reduced-price season pass that enables students or faculty members to see all of the performances for $25.

All photos courtesy of Rod Millington.

The Barber of Seville will be performed on Thursday, Nov. 8 at 7:30 p.m. and Sunday, Nov. 11 at 1:30 p.m. The show has a total runtime of three hours and ten minutes, including intermissions. Student rush tickets for both performances are available 30 minutes before showtime at the Sarasota Opera Box Office, located at 61 N. Pineapple Ave., Sarasota. Students can also visit the Box Office or call (941) 328-1300 for information about the Student/Teacher Season Pass. Visit sarasotaopera.org for information on performances and dates.