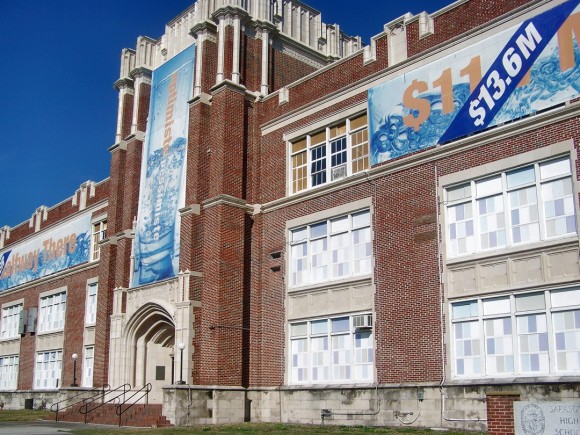 The SMOA’s newest banners boast reaching past the halfway point of its fundraising goal.

The museum concept originated about four years ago with a group of local individuals who have an interest in modern contemporary art. “We have the Ringling Museum, which focuses primarily on European art and really doesn’t do much for modern contemporary art,” Thompson said. “It is something that is missing from Sarasota’s cultural fabric.”

During this time, the local school board was deciding what to do with the high school building that had been closed for about ten years. “They were struggling with it and asked the community for ideas and for people to give proposals,” Thompson said. “I had been following this all along and was supportive of their project, but never really thought that we would necessarily be that closely connected. But then this opportunity came up with the historic high school.”

The original SMOA group and Ringling College created a proposal which featured 21,000 square feet of the high school’s space dedicated to the museum and the rest of the 57,000 square feet set aside to be used by the college. The school board selected their proposal. “At that time we were two separate entities,” Thompson said. “[The group] was its own nonprofit and we worked together, did an architectural competition and the winning competition was to put the museum on the second floor and the first and third would be used for studio spaces and so forth for continuing education classes.” Finally, they decided it did not make sense to be two separate entities.

The SMOA will have eight galleries, nine studios, an auditorium with graduated seating for 110, a museum café with indoor and patio seating, a museum gift show, office and meeting space and an outdoor sculpture garden. The entire front of the building will be preserved because of its status as a historic landmark. “We don’t plan to make any changes to front, and in fact we are replacing the windows with authentic windows from that time,” Thompson continued. “The back part will have some additions and changes, but most of the renovation is a total redoing of the interior.”

The SMOA Board of Directors, which includes its president, Wendy G. Surkis, and Elaine Keating, whose name graces the New College Foundation building, plans to primarily bring in visiting shows in the beginning. “We are not in the process of really collecting work at this point for the museum,” Thompson said. “Eventually, we will be getting it from collectors and donors who have an interest in modern contemporary art.

“We are in the process of a major [fundraising] campaign,” Thomspon said. While the fundraising goal is $22 million, $14 million will be used for construction work and the other $8 million will be set aside as an endowment for the facility. “The concern is that the museum itself will not be a major revenue generator,” Thompson explained. “So we want to be able to make certain that the museum is supported with the income from the endowment. I don’t want to be using tuition money or money from the operations of the college to support the museum.” The fundraising efforts began in November 2008 when Ringling first received the keys to the high school building. They have now raised a little over $14 million.

According to Thompson, much of the fundraising efforts have been directed toward major donors and foundations. “A major challenge is the fact that the recession hit right about the moment we were starting,” Thompson said. “So, it’s been a tough fundraising environment at this point, but we think we’ve been very successful at getting to this point.” In an effort to educate people about contemporary art, Ringling has held events for potential donors. Recently, sculptor Janet Echelman presented about her work. “It was an event to show people the kinds of education opportunities that would be available once this museum opens,” Thompson explained.

The primary focus of the museum is not to exhibit community or Ringling College students’ artwork, but rather to showcase world-class works of various artists from around the world. “It is a major economic development piece in terms of enhancing the cultural tourism that occurs here in the community,” Thompson said. “It is also going to be a major educational component for people to understand modern and contemporary art. A lot of people don’t really understand it and this is an opportunity to educate people about it through different kinds of programs with the museum.”

It will probably take about a year and a half for the museum construction to be completed after the fundraising goal is reached, most likely in 2014 or 2015. “One of the interesting pieces of [the museum] is the way the concept for it fits together,” Thompson concluded. “You’ll be able to go through the museum, look down viewing areas and watch art being made at the same time you are going through the museum, which is very exciting.”