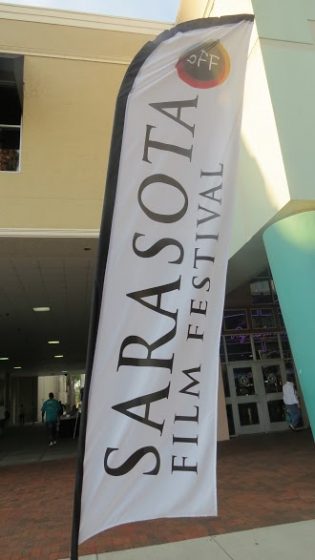 18 years, 50,000 people, 200 films and six theaters – that’s how long the Sarasota Film Festival (SFF) has ran, how many people attend, how many showings it offers and how many locations are included. Annually, as the city-wide event draws near, the SFF logo begins to appear on downtown buildings, film guides start to gather on coffeeshop counters, local news coverage switches gears and dinner conversations become sprinkled with light movie talk. And then – like clockwork – when day one of the festival arrives, our lovely locale transforms into a movie metropolis, attracting cinephiles, reviewers, industry personnel and the genuinely curious from here and beyond.

Before there was a Sarasota Film Festival, however, there was a Sarasota French Film Festival. In August 1989, the Chicago Tribune reported that Sarasota would be home to the nation’s first film festival devoted solely to the French genre. Originally from November 14 to November 19, the Sarasota French Film Festival was held at the Asolo Center. From the sounds of it, this was kind of a big deal. The “French Minister of Culture” Jack Lang and the Florida Governor at the time were co-chairs while the honorary committee included the likes of Elie Wiesel and Gregory Peck along with the Director of the American Film Institute in Los Angeles.

“Movies were always one of the ways we learned about other cultures and about culture in general,” Sarasota French Film Festival Artistic Director Molly Haskell said in the Chicago Tribune article.

Seven years later and the Sarasota French Film Festival would see its demise. This is when John Welch began planning a new independent film festival to fill the resulting void. Jody Kielbasa, who is now the Vice Provost for the Arts at University of Virginia, was hired as the Executive Director. Two years later and SFF made its debut as a mini-festival, showcasing eight movies, welcoming six actors and holding a gala fundraiser in January 1999.

A St. Petersburg Times article from 2001, penned as the festival was gearing up for its third year, illustrated Kielbasa’s goals with SFF. Apparently, the Sarasota French Film Festival was more fashion than film.

“Screenings were mostly time-wasters until the next ritzy cocktail reception, reasons to invite celebrities (celebrities in France, at least) to schmooze,” the St. Petersburg Times article shared. “Black tie wasn’t optional, it was expected. People sighed at the festival’s demise in 1996, then found other places to show off their jewelry.”

Kielbasa wanted the new festival to reach out to those who didn’t make the society pages, as the article put it. “The rap against it was that it was a little too elitist,” he said. “If you were a connoisseur of French films, it was fine. If you weren’t, you were out of the mix.”

Efforts to tarnish the SFF predecessor’s superficial glamour began with offering two free outdoor movies – which, in 2001, were The Adventures of Robin Hood and Casablanca. Tickets for individual screenings were set at $7, and there was a moderately priced BBQ lunch with independent filmmakers.

Despite these inclusive efforts, a decent amount of controversy surrounded SFF in its early years. “Film Festival windfall irks arts leaders,” a front page Herald-Tribune article from October 7, 1999, chronicles the frustration that arose when the new endeavor was awarded almost double its requested art grant amount from Sarasota County.

Dozens of arts organizations submitted applications to compete for the county’s tourist tax money, which were subsequently judged by artistic merit and the potential for their events to draw tourists.

Mills, who was a member of SFF’s advisory board, asked his fellow commissioners to increase the recommended grant from $9,000 to $50,000 (SFF originally requested $24,999). He claimed that the budding festival had potential for international acclaim and needed a boost in funding to enhance its second year. The commissioners agreed unanimously without mentioning Mills’ SFF involvement and pulled extra funds from the $154,250 in tourist tax dollars not spent that year. The other arts leaders saw the move as corrupt and in favor of Mills.

Mills defended his actions by stating the recommendations were exactly that—recommendations. The article also mentioned that the debut SFF, held at Regal Cinemas’ Hollywood 20 downtown (which is still a participant today) hosted 2,100 attendees.

In 2003, it seemed that SFF had gracefully overcome that controversial hiccup, and Kielbasa’s inclusive goals were starting to not only show, but pay off. A Variety article from 2003, which was a spotlight on Sarasota and Miami, focused on the success of SFF, calling it “one of the edgier, more interesting entrants on the scene.” Aerosmith even performed at the 2003 after party, as part of a tribute to Grammy-winning movie producer Jack Douglas, who worked Steven Tyler’s band previously.

A few years after changing from January to its current time in April, the festival experienced more issues. In 2009, SFF’s founder and at least seven other executive and committee board members resigned, emphasizing the divide between the older members and the new president Mark Famiglio, who assumed control amid financial issues the year before. Those financial issues were still abound at the time of the resignations: the Herald-Tribune reported that the festival was over $600,000 in debt. Founder Welch stated in response to resignation: “the direction that the festival has taken is no longer compatible with the vision I had when we started the festival in 1998.” Kielbasa also resigned in 2008.

Famiglio seemed to not look into the resignations too much since, as he believed, changing of the guard is a natural part of any organization’s evolution. Famiglio is still the current president and chairman.

However, by that point, SFF proved apt to stand tall in the face of the adversity. The festival continued and has grown into the massive event that it is today.

2016’s SFF wrapped up this past Sunday, running from April 1-10. New College students have traditionally been involved in and attended different parts of the festival over the years.

Thesis student and regular Tangent TV show and movie reviewer David Canfield attended multiple movies and events at this year’s SFF. “I attended three films: Louder Than Bombs and Little Men, which were in the Spotlight section, and Weiner, which was in the documentary section,” Canfield said in an email interview. “All three were great. Since I do a lot of work for different film sites where I can, I follow festival season pretty closely, and these three were at the top of my list.” He added that Weiner won the Sundance jury prize for Documentary.

Canfield has written for Indiewire, an established independent film community news site. Through that connection, he has worked with SFF jurors, including Documentary jury member Kate Erbland, who is Indiewire’s Managing Editor.

“I covered several festivals for her and the company, including Tribeca and New York Film Festival,” Canfield explained. “Indiewire is basically the top brand for festival coverage around, so it’s pretty cool that their top people come to Sarasota as judges and viewers.”

This year’s festival kicked off featuring Academy Award-winning actress Sophia Loren and an opening red carpet, film (Other People, a comedy-drama written and directed by Saturday Night Live’s Chris Kelly) and party. Opening night hosted 1,700 people. Hollywood Nights focused around student participation in SFF, and #DiversitySRQ was a special showing of a documentary written, produced, directed and edited by students about African American and Jewish communities. Closing night featured the film The Congressman and wrapped up at the 1137 party, which took place at World of Beer downtown. SFF 2016’s winners were Men & Chicken, which won the narrative feature jury prize, and Cameraperson, which won the Documentary jury prize.

“Sarasota’s a great spot for a lot of these movies which don’t find big audiences outside of the festival crowd. Little Men, particularly, is from a great director whose specialty is queer NYC films, and this was maybe the best I’ve seen from him,” Canfield continued, touching on what makes the SFF special. “Basically, I use Sarasota FF to catch up on buzzed-about, small-scale movies making the rounds. It’s really thrilling for me, how the global independent film community that I was lucky to be a part of in New York last year comes down to Sarasota, and how I can catch up on what I’m now missing as a thesis student!”