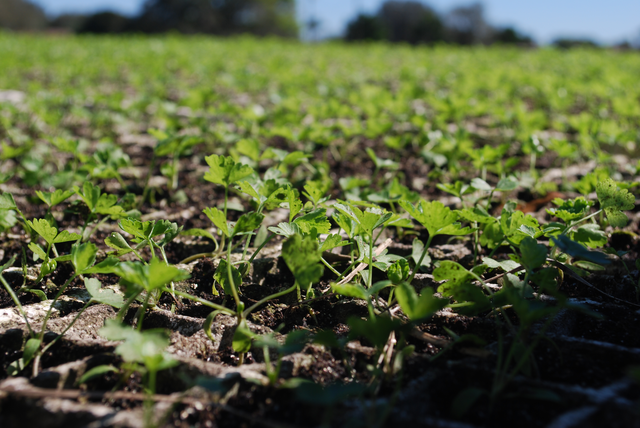 Try to imagine infinity. Now imagine everything that can possibly happen over a limitless amount of time and jam most of it into just one percent of infinity’s timeline, leaving the rest empty by comparison. This is what it is like to imagine the distribution of wealth in the world today. A report released in mid-January by the nonprofit Oxfam revealed that the top 1 percent of earners now grips more wealth than everyone else combined. As wealth inequality breaks records every year, the food gap on the planet follows suit.

In Florida alone, 2.5 million people live in areas with little to no contact with food markets within reasonable walking distance. These areas are designated by the United States Department of Agriculture (USDA) as food deserts. “The USDA created an algorithm which helps identify a food desert and what they look at is approximated grocery stores, income in the neighborhood and also, along the income lines, eligibility for different benefits like SNAP [Supplemental Nutrition Assistance Program],” said Megan Jourdan, a New College alum and a community health specialist for the Florida Department of Health in Manatee County.

“There are different types of food deserts, layers of them,” she added. “The original food desert algorithm looked at whether or not somebody is within one mile of a grocery store. The next phase of food deserts expanded that to say, in an urban area, even if you’re within half a mile that can still count [as a food desert] because if you don’t have a car that is a lot of space.” “The health departments partnered across county lines – which isn’t common – to use the same methodology in food deserts across both counties so then we could say this is what the regional food system looks like, this is what we’re hearing from residents, and we’re implementing cross-county solutions that maximize resources.

In Manatee and Sarasota County combined, there are 19 food deserts affecting 77,583 residents. “Technically, until the Walmart went up, we were in a food desert here,” Professor of Anthropology Erin Dean said. “Except if you were affiliated with the school and could eat at Ham. When there wasn’t Walmart, there was nowhere in this neighborhood to shop for groceries.” The Food Access Improvement Project spent about a year collecting data from residents in local food deserts primarily by creating focus groups within each area. “The point of the focus groups was to develop themes around assets, barriers and solutions to accessing and eating healthier foods – primarily fruits and vegetables,” Jourdan explained.

The focus groups were held from January to March and in April and May transcripts from the meetings and themes which came up throughout were analyzed and used to create a survey which would gather specific data to base future plans upon.  The next step was bringing this survey door-to-door in the residential neighborhoods involved with the assessment.

Several New College students contributed to the project through the Food Desert tutorial, which was held last spring. Students in the tutorial recorded the narratives of residents in local food deserts and presented them in a final video available on YouTube.

“The tutorial really helps because reporting on data is really boring and not engaging,” Jourdan said. “We wanted the interviews to show what was working well in communities and, if something wasn’t working well, what were ideas or solutions. So what it did was it lent a face and a voice and a very personal story to something that might otherwise be dry.”

The project gathered an impressive amount of data from residents in underserved communities and interviews with key people in the area including reverends and school principals. Door-to-door surveys revealed residents’ thoughts on food inaccessibility and their ideas for improvement. For instance, participants in Newtown – one of the food deserts involved in the assessment – reported price as an obstacle to a healthy diet and expressed interest in raised awareness of existing community assets such as gardens and farm stands.

Jourdan said that the department is working to make sure the solutions they come up with are driven by the residents and their needs. “Residents told us that they really wanted to be able to access fresh healthy foods nearby so we applied for a USDA grant for a mobile farmer’s market and received that grant,” she added.

Another round of focus groups are currently underway in order to collect specific feedback from residents on intervention planning. “For example, residents are being asked where the Mobile Farmer’s Market should park, which days/hours residents would like to shop and what specific items the market needs to stock,” Erin Laird, another key participant in the project, said in an email interview.

This past January, the Florida Senate Committee on Agriculture unanimously passed a bill supporting the Healthy Food Financing Initiative (HFFI), a program with the goal of making nutritious food more accessible by providing grants to “construct, rehabilitate, or expand grocery stores and supermarkets in underserved communities.” Essentially, the initiative provides financial incentives for stores to be built or rebuilt in areas without access to fresh foods.

“As a business owner, the places that need food resources are often low-income places and so they’re not the place that you look to start a business because you think maybe that neighborhood couldn’t support your business, and maybe it couldn’t,” Dean said.

On a national scale, the food gap is difficult to measure and address. But by focusing efforts within communities experiencing these food insecurities there can be specialized solutions developed to improve the availability of food and nutrition.

“I was surprised when I first moved here from Seattle, community supported agriculture was a really big deal there and I was surprised that there weren’t more examples of it here,” Dean said. “Sarasota County is interesting because there are probably areas close to the highway that are zoned for agriculture but most of it is suburban and urban. So the farms tend to be further out.” In Anthropology of Food, students will take a look at food access and insecurities during the last few weeks of the semester. “We are doing a local case study, we’re reading a publication put out by All Faiths Food Bank about hunger in Sarasota, particularly childhood hunger,” Dean said. “So we’re going to talk about the conditions that lead to hunger locally and how such a wealthy community can have a high instance of child hunger.”

One way to understand food insecurities in a community could be to consider the area’s culture and industry. For example, a recorded 929,000 tourists flocked to Sarasota in the 2014 fiscal year. Compare this to the 400,000 permanent residents. Needless to say, this is a city for tourists. So what does that mean for the people who actually live here?

At restaurantsinsarasota.com, a site that declares “you’ll never go hungry in Sarasota,” there are more than 145 restaurants listed. In comparison, there are only 5 Winn Dixies, 9 Walmarts and 11 Publix grocery stores in the area.

Most of the restaurants and stores mentioned are consolidated downtown. “We say you can take a bus downtown but depending on where you are in Newtown it’s difficult to catch a bus that goes there and some people aren’t particularly mobile so just catching a bus can be a challenge,” Dean said. “The problem in Sarasota isn’t bringing more local fruit and vegetables to the downtown farmer’s market, it’s bringing it to other neighborhoods.”

One successful initiative to bringing food right into residential areas is Sprout, a mobile pantry set up by All Faiths Food Bank in 2014. Sprout, which is basically a refrigerated truck, visits 10 different locations within neighborhoods and communities twice a month, providing free produce to residents and locals.

“We purchase 90 percent of the produce ourselves, we have stuff coming from local farms and anything that is donated is given out in the back,” Ryan Beaman, an affiliate with All Faiths Food Bank and volunteer coordinator said. “We can usually give out 12 to 15 pounds of produce per family but it all depends on what we have.”

Sprout’s number of customers ranges from 100 to 120 people per day. The Sprout stop in Newtown is at Roy McBean Boy’s and Girl’s club every first and third Tuesday of the month.

“I come here every time they come,” Greg Darnport, a Newtown resident said. From the menu displayed at the front of the truck, Darnport choose Idaho potatoes, red onions and carrots. “I usually cut the carrots up and cook ‘em, I make french fries with the potatoes and the onions I put in everything.”

There are a lot of factors involved when addressing the food gap. Many of them are economic concerns but others have to do with diet practices and food education.

“One of the strongest responses we got is that people don’t know how to cook the food, they don’t know how to buy within a budget,” Jourdan said. “So you can put in as many access points as you want but if you’re not meeting the education needs they say they have then it doesn’t matter.”

“It’s important to critique the fact that our solution to hunger is to provide food, not to address the reasons that people are hungry in the first place,” Dean said.

Information for this article was taken from www.penniur.edu and www.acf.hhs.gov.

You can view the Food Desert Tutorial’s final video project at https://www.youtube.com/watch?v=fUO3h3Em6OY