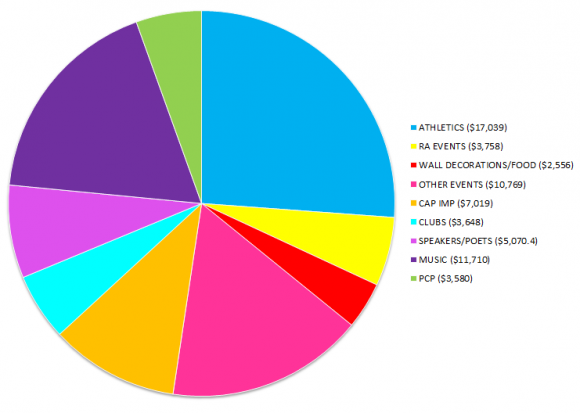 Information in the above chart is based on allocated figures through the April 29, 2012 meeting of the SAC.

With only a month left in the 2012-2013 academic year, it might seem that event after event is being thrown by different student organizations. Event sponsors go through a series of offices to get everything they need in order for the day of the event — sponsors must reserve a space, supplies, equipment TAs, make playlists and buy food and decorations. While events may be funded out of several different on-campus resources, including Student Affairs, the Council for Academic Affairs (CAA) and the Student Allocations Committee (SAC), the SAC provides the most accessible and most frequent funding for student events.

The committee began this academic year with a budget of $75,000 and, as of Apr. 29, was believed to have only about $600 remaining after some budget confusion. The SAC’s budget has been reevaluated and when this issue went to press the actual remaining budget was $5,251.84. Out of this remaining amount, $1,600 may be allocated to the graduation Palm Court Party (PCP). The SAC is looking into the problem behind the severe budget error and is adjusting clerical methods accordingly. “This issue is obviously something of concern that needs to be addressed,” SAC chair Alexandria Wells said. “But it’s great that we now know that we have a much higher remaining budget.”

The SAC typically imposes a soft cap of $10,000 on athletic funding, but for this upcoming academic year Wells said that the cap will be eliminated. “[The problem with the soft cap] was brought to light during spring marathon when almost every fitness center class had to be cut in half because of this cap, yet other requests continued to receive full funding,” Wells said in an e-mail to the Catalyst. “This cap is no longer a tool for our budget, but rather a road block for students getting the classes they want at the fitness center.” The athletics soft cap does not only cover regularly offered sports such as soccer, swimming and tennis, but also includes the yoga, pilates and zumba classes. The cap also covers any equipment that might be essential for clubs such as the fencing club and the sail club. To date, the SAC has allocated $17,039 to athletics-oriented allocations.

In order to make the allocation process more efficient for the upcoming academic year, Wells said that, rather than take an individual perspective on each request, the committee would base funding off of previous years’ allocations and recent allocations. This can be particularly important for allocations that go toward hosting bands and other paid musical performers. This category received the second-highest amount of funding from the SAC this year to date, with an allocated amount of $11,710. The SAC also plans to have a weekly budget of sorts: the semester portion of the budget would be divided into weekly portions that the committee would attempt to not fund beyond. The exception would be SAC marathon, which happens once per semester — events going to marathon would be funded above the weekly budget.

Wells hopes to establish the SAC’s funding on the same plane as the CAA. “People shouldn’t be given money just because we have it; they have to show us that [the event] deserves that money.” Wells said. “This also cuts down on funding that could be better spent elsewhere.” Within the plan for creating a more serious requesting and allocating process is the way that people would request funds: applications would have to be more detailed and the requesters would have to show that they are passionate about the event or project that they are hoping to have funded. To balance out the higher expectation of work on the requesting side, the SAC would also have information regarding how much was spent on that event or a similar event during the previous year, the state of the current budget and its state at the same time the previous year and an analysis that shows how much money is being requested for each funding sector during that meeting. It will also be expected that requesters have searched beyond the SAC for funds. This includes applying to the CAA’s speaker fund if the request is a presenter, workshop or performer, asking for money from student affairs and appealing to a “mother organization” for funding. Although it is already expected that requesters will have searched elsewhere for funding, it will be a condition of greater concern for the upcoming year.