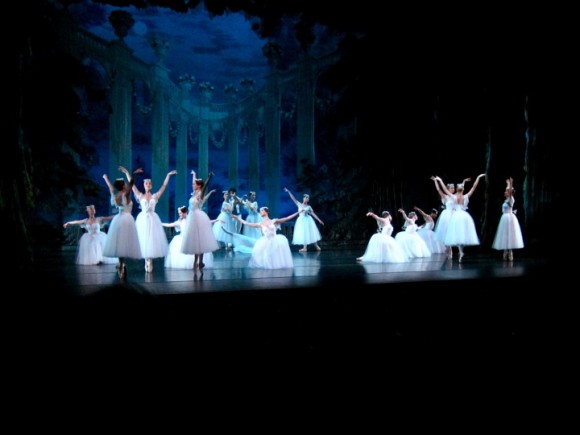 The Russian National Ballet is a traveling manifestation of a fascinating bit of history. Founded in the late 1980’s during perestroika, or a time of somewhat increased freedom in the late Soviet era, the company was borne out of the introduction of global innovations in dance to classical Russian technique. Originally called the Soviet National Ballet, the company has grown into an internationally renowned group led by celebrated Bolshoi ballerina Elena Radchenko and remains a testament to the famous excellence of Russian ballet. The company performed in Sarasota on Feb. 25 at the Van Wezel — just one of many shows in a four-month tour as the company travels across the country with six complete shows packed into a single truck and a functioning ballet company squeezed into two buses.

“Touring is not for the faint of heart,” company manager Madelaine Collinson explained in the green room of the Van Wezel. “It’s very rigorous. We basically travel every day. The dancers do a one and a half hour class every day, then rehearse for two and a half hours and then perform the show.” Tiny girls in T-shirts plastered with Cyrillic scrawl walked around and while their stage make up looked garish up close, their smiles to Madelaine indicated not an ounce of nervousness about the pending show. The dancers will do almost 100 shows in their four months here, rotating through Giselle, Swan Lake, Sleeping Beauty, Cinderella and the two showcased in Sarasota: Romeo and Juliet and Chopiniana, also knows as Les Sylphides.

“There’s no story really — it’s just the ultimate classical beautiful ballet,” Collinson said of Chopiniana. Chopiniana is a short ode to the beautiful marriage of music and movement. Choreographed by Mikhail Fokine and first danced in 1907, the quietly sensuous ballet has remained a centerpiece of Russian and international companies alike for over a hundred years. Set to Chopin’s Seventh Waltz, it is a tribute to the loftier aspects of ballet — the indulgent emotion of dance stripped of colorful character and costume. 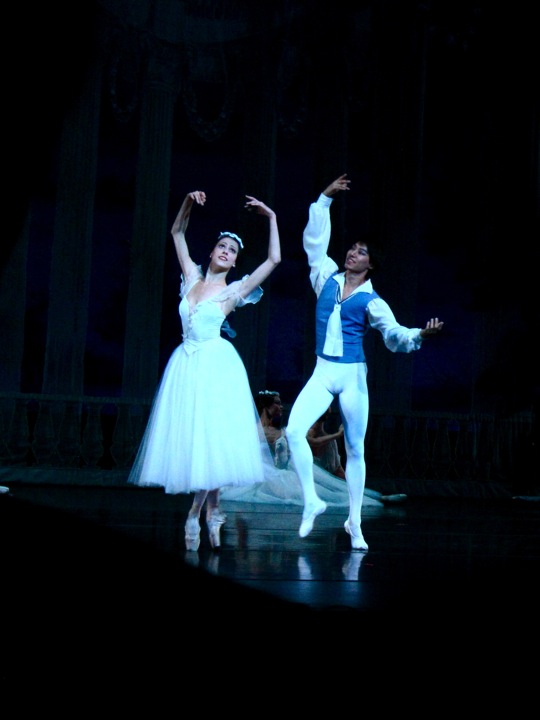 A romantic moment in Les Sylphides.

Chopiniana was beautiful. The gaudy purple curtain lifted to reveal the tulle-clad dancers posed on stage, the mass of them taking their last real breath before launching into the dance so familiar to their tired feet. The lilting music carried the twenty or so beautiful Russian and Kazakh girls in swirls across the space like little choreographed eddies in a cold fast stream.

The audience leaned forward with admiration as the nearly identical dancers wove around one another, forming trios and duos for magnificent moments before melting back into the mass to seethe about the stage once more. Clad in calf-length romantic tutus, the girls waltzed about each other as the dancers of the corps eventually found their standard places alongside the sides of the stage, creating a human frame for their envied counterparts. The principals, dressed identically to their accompanying dancers, were identifiable only by their slightly more confident smiles and far more prominent positions. As they flitted across the stage, they drew viewers further into the luxurious dance.

The next ballet presented — Romeo and Juliet — was the opposite of the first. The stage nearly overflowed with opulent costume and scenery, replete with sword fights and pantomimed love scenes. In the ballet, Shakespeare’s legendary tragedy is translated into gesture and movement and condensed to less than an hour of dance. The dancers rushed through the plot, the complex love story disappointingly flattened.

Despite this unsatisfying shallowness, the first-class technique carried on from the first act as the dancers executed the movements with grace as they told the story with their bodies. The final ghostly scene shared by the lovers was haunting: the two surrounded by gauzy ghosts as they were resurrected for a final pa de deux.

Though a wonderful ballet with engaging choreography and exciting costume, Romeo and Juliet just couldn’t compare to the sumptuousness of Chopiniana. The simplicity better showcased the dancers, bringing them and their admirers closer together, bonded across the gulf of the stage by the nakedness of the piece. Its perfect simplicity was executed with the extraordinary grace that is the essence of ballet.