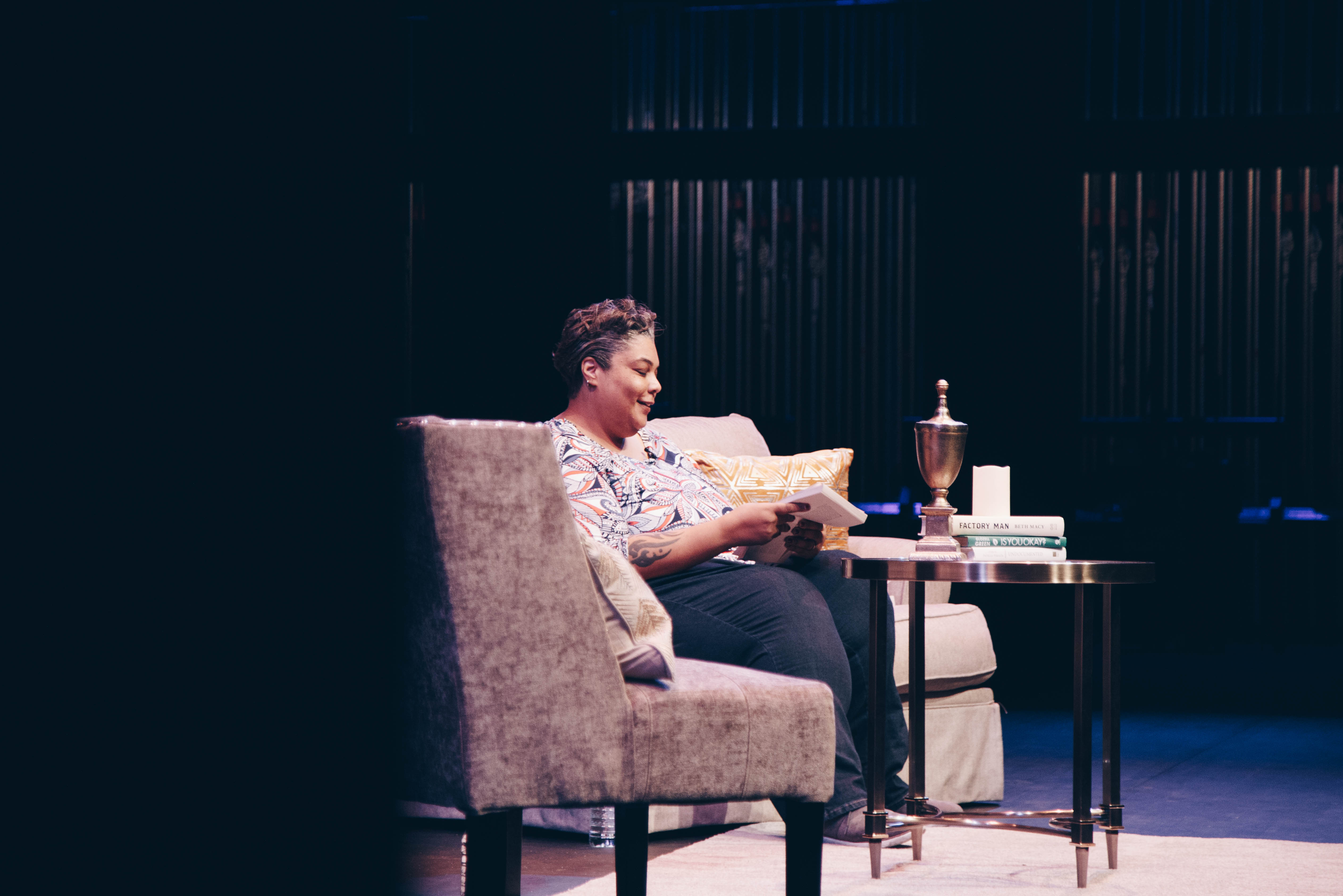 photo courtesy of Alessandra Casanova Roxane Gay excerpts of her book to the audience.

Gay recently graced Tampa with her presence, taking time to talk to a packed theatre about her books and current events, answer burning questions and, afterwards, sign copies of her works. Gay did not appear in Florida on a whim, rather she was invited to speak for the Sept. 27 installment of the USF College of Arts and Sciences’ Frontier Forum lecture series.

“We felt that Gay’s work touched on a number of important issues: sexual assault, toxic masculinity, body image, racism, etc.,” Assistant Dean for Communication, Community and Global Engagement Elizabeth Kicak said in an email interview. “She is considered to be one of the best in her field, as an academic, while also having a strong following among non-academics.”

When doors opened for the event at the David A. Straz, Jr. Center for the Performing Arts half an hour prior to Gay stepping foot on stage, the foyer had already been elbow-to-elbow crowded. Donors to the university, students from USF and several other nearby colleges, members of the general public and Gay’s parents (according to her) were in attendance. The stage on which Gay spoke had a lovely living room setting in place, from where she read from two of her books on the couch. She was later joined by Dean of the College of Arts and Sciences Eric M. Eisenberg, who sat adjacent on a matching, plump chair.

Gay opened the seminar with discussion of Dr. Christine Blasey Ford’s testimony, which had taken place earlier that day, and read the introduction she wrote for Not that Bad: Dispatches from Rape Culture. This anthology, edited by Gay, features a collection of essays regarding mostly women’s experiences with sexual harassment and assault. Gay detailed her own personal experience in Not That Bad’s introduction.

“May all our lives be so ruined,” Gay said, speaking to the assumed probability that Supreme Court nominee Brett Kavanaugh will be appointed in spite of recent sexual assault allegations against him. Gay also brought up her Yale University days and the reputation of Delta Kappa Epsilon (DKE), the fraternity of which Kavanaugh was a member.

“When I heard Kavanaugh was in DKE, I knew he did it,” Gay said.

Gay also brought up more lighthearted topics throughout the evening, such as her love for Barefoot Contessa host Ina Garten and her frequent disdain for her personal trainer, T.J., when reading excerpts from her 2017 memoir, Hunger.

She told the story of how long it took her to realize that she would be co-writing the World of Wakanda comic book series for Marvel Comics, and not some startup that was named after the real deal. Upon making that realization, Gay set out to do the series with the hopes of meeting Thor, saying “he’s fine,” and commenting that she still hopes to meet him.

Gay finished the seminar by answering questions asked by Eisenberg, which included her views on hate speech versus free speech, and encouraging audience members not to be complacent in the coming days, before taking her leave from the stage for the book signing.

As previously mentioned, her visit was a part of the USF College of Arts and Sciences’ Frontier Forum lecture series. According to the USF College of Arts and Sciences website, Frontier Forum began in 2010 as a means to publicly host renowned intellectuals in Tampa. Previous speakers for the series include Jane Goodall and Neil deGrasse Tyson. These events are free and open to the public.

“I was very proud to be a part of the event with Roxane Gay,” Kicak said. “The turnout far exceeded our expectations … We saw people of all ages and all backgrounds show up to listen to an incredible scholar and inspiring woman.”