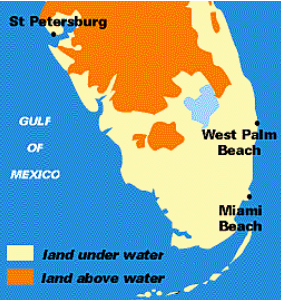 As 2016 comes to a close, it might seem like most people are aware of climate change and hopefully accept the reality of it. After all, this year is predicted to be the hottest year on record, blowing past the record temperatures set by 2015. And yet there are still those conservative uncles who will sit next to you at Thanksgiving and argue that climate change is “a hoax,” maybe even one created by the Chinese. Republican Senator Marco Rubio, Republican Governor Rick Scott and Republican President-elect Donald Trump are all good examples of these “conservative uncle” archetypes who are also in charge of making laws that will dictate how the United States and Florida participate in the fight against climate change and prepare for the inevitable effects of global warming.

Climate Central, a nonprofit news organization that reports on and analyzes climate science, reported that rising seas, a crowded coastline, spongy bedrock and the relatively common occurrence of tropical storms put more people and property at risk from storm surges exacerbated by sea level rise in Florida than in any other state by far. Perhaps one of these factors alone would not be so bad but when all of these characteristics are confronted with greater high tides and storm surges they become detrimental.

In South Florida $69 billion worth of property will flood at high tide by 2030, according to a 2014 study “Risky Business: The Economic Risks of Climate Change in the United States.” Roughly 2.4 million people in the Miami area live less than 4 feet above the high-tide line; sea level rise has doubled the risk of a storm surge at this level in South Florida by 2030. By 2100 sea level is expected to rise between 6.6 and 30 feet.

Although that seems far off, the seas are already rising and many places – including Florida – are already seeing the effects. In fact, Miami Beach experiences flooding so frequently the city has already spent more than 100 million dollars on coping measures.

Rubio and Republicans, where do they stand?

Senator Marco Rubio has not always held his current position on climate change, one that denies that human activity is causing climate change. When he was a Florida legislator he said in 2007 that climate change gave the state an opportunity to become the “Silicon Valley of that [green energy] industry.”

He began openly doubting climate change science when he ran for U.S. Senate in 2010. He was a favorite of the Tea Party, known for its libertarianism and science denial. During his time as a U.S. Senator, Rubio has signed the “no climate tax” pledge circulated by anti-tax lobbyists that promises to not support a tax on carbon, a clear move for fossil fuel companies. He has claimed he would roll back Obama’s Clean Air Act actions and he supports increased offshore drilling and the Keystone XL pipeline, according to Newsweek. In the eyes of an environmentalist, none of this is good.

Rubio has remained silent and absent on the threats of climate change, an issue that is important to many of his constituents. His inaction has also angered public officials in Miami who feel left alone to deal with a massive and pressing problem. A June 2015 poll of Florida’s 27th Congressional District, including Rubio’s hometown of Miami, found 81 percent of respondents believed climate change is a problem Congress should address, and 82 percent wanted Congress to support economical ways to mitigate the problem, according to Newsweek.

Although climate change denial is common among Florida Republicans, there are a few Republicans who have accepted it. Representative Carlos Curbelo, also from Miami, was the first House Republican co-sponsor of a resolution last year acknowledging that climate change is a problem that needs to be addressed and wrote an op-ed for The Miami Herald entitled “Climate Change Cannot Be a Partisan Issue,” according to Newsweek. Representative Ileana Ros-Lehtinen, another Miami Republican, also signed on to the resolution.

In a 2009 report on climate change in Florida, the Florida Oceans and Coastal Council stated that coastal wetlands, salt marshes and mangroves are all expected to be negatively affected by sea-level rise. Florida’s beaches and coastline will experience varying levels of erosion. In the Marine Policy Institutes’ study, an important impact of sea level rise that will greatly affect Florida is greater high tides and storm surges, which have the potential to be detrimental to coastal infrastructure. Climate change will change the geography of Florida, onshore and offshore, including its barrier islands, inlets, estuaries and coastal forests.

In a study entitled “Synopsis of an Assessment: Policy Tools for Local Adaptation to Sea Level Rise” published in 2009 by the Marine Policy Institute at Mote Marine Laboratory it was posited that although the Florida government has been working on policies and processes to cut greenhouse emissions so as to slow global warming and sea level rise, there is a concerning lack of planning for the effects of climate change that will inevitably happen.

Seven years later and it remains unclear how much has been done to plan for the effects of rising sea levels in Florida.

However, the study is hopeful that local and state governments have enough time to plan even for the high global estimates of a 40-inch sea level rise by 2100.

According to the document: “There is yet time for communities to adapt to sea level rise and they already have a number of tools in hand to begin this work: land use planning, coastal development rules, ecosystem conservation plans, public facilities and infrastructure investments and post-disaster redevelopment planning.”

According to the Florida Oceans and Coastal Council, climate has the potential to “threaten every aspect of life.” Most people understand that rising seas will affect homes and roads in low-lying coastal areas, but what is not talked about as much is the effect it will have on water systems and the health of residents and visitors, for example, the potential of bursting septic tanks contaminating groundwater in Miami because of sea level rise. Climate change will also affect the economy, especially Florida’s, where tourism and real estate are two huge players.

The Mote Marine study promotes the importance of adaptation to sea level rise at the local level. Impacts may differ by region depending on the different biophysical and socio-economic features of communities, thus adaptation to sea level rise should be tailored to specific local vulnerabilities and needs. And with not much help in Florida from Tallahassee or Washington D.C. it seems the work will be left to local governments.