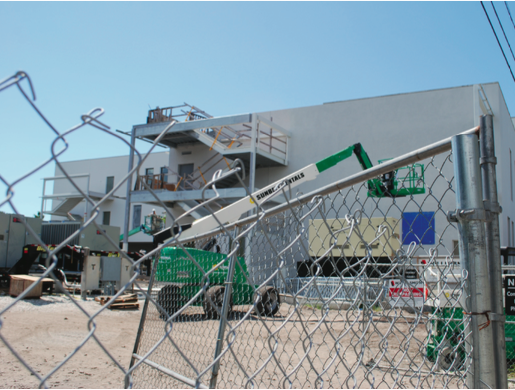 It is nearly impossible to travel east down Dr. Martin Luther King Way without noticing three construction sites on the south side. These sites are manifestations of Ringling College of Art and Design’s expansion plan. As development presses forward, local residents have been left with concerns regarding the college’s swift extension east into Newtown, a historic African American community.

“[The Newtown residents] are feeling the pressures of growth,” Sarasota Mayor Willie Shaw said. “It’s not like new growth in your hair, this growth is painful to some because they see themselves being pushed to a certain point and there’s nothing they can do to hold it back.”

A native of Newtown himself (with a family tree growing there for generations), Mayor Shaw is acutely aware of the community climate. “The idea of complexity is very visible because some of us have been here 100 years and don’t want to give up the village concept.”

Construction on a new Visual Arts Center hit the ground in January and a 46,000 square foot library is set to open this year. The third construction site comes into view as you pass MLK park; this will be the Ringling Film Soundstage, a building “sprawling the length of a city block” and “fit for professionals,” as Ringling College’s website describes it.

The parcel of land the soundstage is being built on is the college’s eastmost property – closest yet to the center of Newtown. The structure rises up just across Cocoanut from MLK park, which MapQuest describes as being “located in the heart of Newtown” and as “a meeting place for the neighborhood.”

In May of 2015, the city of Sarasota voted 3-2 to approve selling a city-owned lot on Cocoanut to Ringling in order to expedite the college’s soundstage construction. In addition, a trade was arranged for the exchange of a lot off MLK for land owned by Ringling off Cocoanut.

The property sold to Ringling (for $20,000) was previously purchased with Community Development Block Grant (CDBG) funds, money which was returned to the CDBG for future use. This piece of land, however, was frequently used as parking overflow for MLK park.

“When you go back to the records, that parking lot was supposed to be exclusively for MLK,” Barbara Langston, president of the Amaryllis Park Association, said. “Our redevelopment plan was adopted by the city for Newtown. They violated that. It clearly says in the plan what can and what can not go on that property there that that sound stage sits on.”

The Newtown redevelopment plan lists the lack of parking along MLK Way as an obstacle to development. A proposed strategy is to create and preserve lots and alleys “to relieve parking stress.”

Upon learning that MLK park’s lot would be shortened, Langston and a few fellow Newtown residents put together a plan to share parking with the soundstage. The plan included a calendar of community events and was presented at a community meeting with Ringling representatives in attendance.

“The reason they told us they couldn’t share parking was because it had to be walled in, gated in or fenced in – that they couldn’t have people just walking onto the campus,” Langston said.

With the acquisition of the soundstage property, the college created a three-way border around MLK park.

Most news coverage on the soundstage dates to 2015, but discussion on where to build it began as early as 2010, when President of Ringling College Larry Thompson presented the Sarasota Municipal Auditorium as a potential location at a city commissioner meeting.

In the minutes from the meeting, the city declared the auditorium an inconvenient location because “any major production cannot occur during the season of the Van Wezel Performing Arts Hall (VWPAH) as the parking lot is needed to accommodate the patrons.”

The property trade and sale conducted in 2015 was a more recent example of Ringling acquiring land in Newtown. In 2014, Ringling spent $925,000 purchasing 3.5 acres of homes and empty lots surrounding the campus.

“The Ringling Art school, they’re buying up people’s property for cheap and they’re not coming in to help our community – no jobs as they have mentioned,” Valerie Buchand, Sarasota Public Housing Authority, said.

Buchand is particularly affected by the soundstage, since her home in Janie’s Garden is directly across from the construction site. She does not recall receiving notice of the plans to build a commercial, post-production complex next door.

While the greater city of Sarasota has embraced Ringling’s expansion with a 1.75 million dollar grant, the reaction of the neighborhood into which the college is expanding is both divided and muddled with distrust. This can, in part, be attributed to miscommunication between the college and the community.

“We thought we were at the table at the beginning, finding out what the plans was and what we were supposed to be working out and negotiating with them as their contribution coming in and being good neighbors,” Langston said. “But in actuality, when we went and requested all the records on all of this, we found out that all the plans and all the decisions had been made a year before.”

Thompson told the Sarasota Herald-Tribune in 2015 that he regretted how collaboration with the community disintegrated, but expressed hope that “the community will still embrace this new facility that will be a beautiful gateway going east.”

Thompson cited deadlines and pressure within the film industry as reasons why communication between the college and the community fell through the cracks.

With a tight schedule for development and the City of Sarasota backing the project, a lot of responsibility has fallen on the Newtown Redevelopment Office to keep the community engaged and educated about these changes.

“The redevelopment office is an extended arm of the city of Sarasota, local government and we work directly with the community to provide them the info that is necessary to keep them engaged in whatever is going on,” Rowena Elliott, the Redevelopment Office’s administrative assistant, said.

“We have several different opportunities for people to learn about [the project]: we assist Ringling to provide out their press releases, we actually do e-blast of over 1,500 community residents, we set meetings for them to go talk to the neighborhood associations which is very crucial in the community,” Elliott said. She went on to explain the setup of these community meetings.

“Different areas have different neighborhood associations that are responsible for being a part of just that neighborhood but they come together as one so everyone can be on the same page. We have the Amaryllis Park Association, we have the Bayou Oaks, there’s Central Cocoanut which is very close to Ringling Art School.”

Central Cocoanut was the first place in Sarasota where “white flight” occurred back in the 1970s. As the neighborhood received an influx of African Americans from the north, it’s white population shifted south towards what is now Sarasota’s downtown.

Today, a reverse shift in the area’s demographics is underway. With Ringling College’s proximity to the neighborhood of Central Cocoanut, and the college buying up quite a bit of property, those who have lived there since the initial shift in the 1970s see the rug being pulled out from under them.

“That neighborhood feels the pressures of not only Ringling from the North but Rosemary from the South,” Mayor Shaw said. “They well understand speculation and gentrification taking place in the area and the question how do they maintain the neighborhood.”

Ringling College has attempted to construct a string of positive interactions with the community. One example is the collaboration between the college and Booker High School, which Mayor Shaw believes to be fruitful. Several students at Booker have been accepted to attend Ringling.

As the dust settles, some community members are still reaching out to Ringling College in order to foster a long-term connection with the institution. One of these attempts has been met with the silent treatment.

“Newtown Nation Vice President Lou Murray has reached out to Ringling because our thought is if they are going to be in our community anyway, they can help us,” Buchand said, herself the president of Newtown Nation. “He has not got a return call from them. They are totally ignoring us now.”

When the Catalyst asked about Ringling’s communications with Newtown, the college’s public relations team responded over email stating simply that “Ringling College works to engage with all constituencies in every area and arena we operate and educate in.”

Thompson frequently offered up economic development for the area as an incentive for the college’s extensions. He is quoted regarding the soundstage in an article by ABC7 saying “It really involves the city, Newtown, the county, private investors and the college so that is a five-way win, win, win, win, win.”

Several residents of Newtown have not seen the fulfillment of these promises for prosperity and remain skeptical that Ringling offers any true benefit to the people of Newtown.

“They were supposed to hire at least 20 percent out of Newtown but that never happened and that should’ve been the number one priority,” Steven Gilbert, a native of Newtown, said. Gilbert knows of only one person from Newtown who was employed by Ringling.

“I’m not even gonna call it an attempt, I’m gonna call it the way I see it which is like a show, to pretend I’m trying to help you,” he said.

Gilbert lives three blocks down Cocoanut from MLK. He reports that, aside from traffic congestion, the construction of the soundstage hasn’t stunted his day to day life. For him, it is a direct clash to the preservation of the historical Newtown community.

“It’s pushing the historical people out,” he said. “The people can no longer afford their property taxes, they’re losing their land. I’m looking for pictures of what Newtown used to look like because pretty soon we’re not gonna be able to recognize this place. Kind of like I don’t recognize the Rosemary District anymore.”

Being a complex and relatively large community, Newtown has residents that do see their neighbor scooting closer to an opportunity for economic development. At the same meeting where Langston and her allies came to protest the soundstage, other residents came in support of it.

An ironic and representative example of differing interpretations within the Newtown Community regarding Ringling’s expansion is that the Newtown Redevelopment Plan lists Ringling College as Newtown’s second most important asset to economic development.

In the wake of Ringling’s development, several members of the Newtown community have been left in the dark on major changes happening in their homes.

“My thought is they wanna make whole Newtown their University,” Buchand said. “But we live here. And they should not come any further than they already have.”