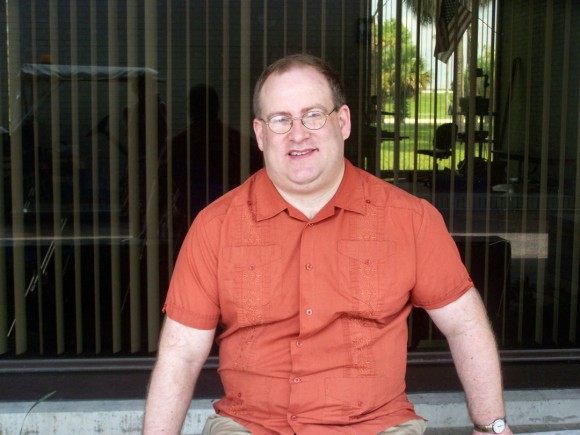 Profesor Skinner sits outside of his HCL 7 classroom.

“I certainly flirted very hard with journalism,” visiting Professor of Political Science Richard Skinner answered when asked what career path he would have taken if not for teaching. “I was an editor for the features section of my college newspaper.” After having taught at schools like Rollins College and Bowdoin College in Maine, Skinner now finds himself in his first semester at New College.

“It’s a fine, small college,” Skinner answered when asked about his impression of the school. “The students are very vibrant and energetic. They are lively in and outside of the classroom. So far I’ve had a wonderful experience with them.”

Reflecting back on his own experience in college while attending the University of Virginia, Skinner remembers details like the part-time jobs he worked in the midst of his studies. These jobs included clerical work in a nursing home, a deli counter in which he cut his thumb with a meat slicer and a cheese counter that he decided would be a safer choice after the aforementioned thumb-cutting incident.

Skinner also recalls his job at PepsiCo, the world headquarters for Pepsi-Cola products. He handed out towels in the executives’ bathroom.

When it comes to academics, Skinner said he was always interested in politics and history. An important influence in his life was his high school history teacher. “He nurtured my interests,” Skinner said. “He really got me thinking more clearly about history and American politics.”

Another teacher Skinner mentioned was his high school English teacher, through whom he learned that the best way to become a good writer is to simply write constantly. “You just have to churn it out,” Skinner said. “There’s no substitute for putting in a lot of time and doing it over and over again.”

Skinner said it should get to the point where you don’t have to think about the technicalities so much, thus leaving room to concentrate more on the context. “You certainly don’t want to write without thinking, but you do want to be able to have the basic mechanics of writing as something you’ve mastered,” Skinner clarified. “That way you can think in coherent sentences and organize your thoughts pretty quickly.”

Skinner, who has written several books and articles on American politics, has more advice for students who are getting into the swing of academic writing. “I find so far that the writing at New College is at a pretty high level,” Skinner said. “But you want to make sure every word has a value, that every word has a job. I find that in student writing there are just a lot of words that don’t need to be there.”

Skinner also recommends getting into the habit of writing multiple drafts, multi-tasking (though not to the point of distraction) and scheduling time wisely. “You want to use different blocks of time for different things,” Skinner advised knowingly. “I find that reading can be done in little chunks of time throughout the week, while writing needs decent amount of time set aside.”

When Skinner’s not doling out helpful advice, he has quirky stores of his past to share, such as the time he was approached by Jeanne Moos of CNN while walking down the street in Washington.

“It was a cold winter’s day and I was wearing a hat,” Skinner reminisced. “Jeanne Moos came up to me and showed me a picture of the hat Laura Bush wore to the inaugural. I said it looked like a chocolate mousse, which I thought was very witty.

“She then noticed I was wearing a hat and she asked me to take my hat off,” Skinner continued. “So I did and she told me I had ‘hat head.’ And I said, ‘I do have hat head.’ And that’s [the clip] they used. So I was broadcasted nationwide in a story about hats. They cut to some hat designers saying, ‘if the hat fits, you won’t have hat head.’”

Skinner has other interesting facts to share, such as qualifying for Jeopardy after testing for it in Atlantic City, N.J., but not making it onto the show because he “wasn’t very good at the buzzer.”

He would still regularly compete in trivia contests with a friend. “Our team was named after [my friend’s] cat,” he said. “We called ourselves Zelda’s People.”

Off campus, it may be hard to guess where exactly one can run into Skinner. New to the Sarasota area, he doesn’t yet have a lot of specific places where he likes to hang out, though he does enjoy Main Street.

One may also find him at a showing for the movie Bridesmaids (“It’s a good movie”) or on his birthday at the New Pornographers concert.