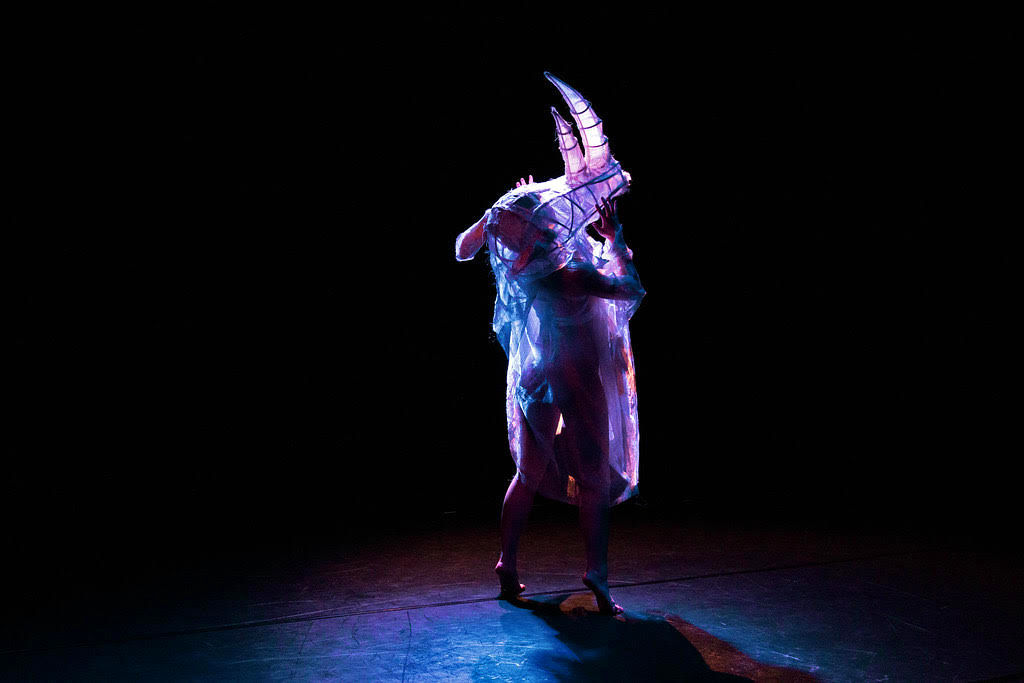 "The Origin Rhino," Phoenix Kazdis is beheaded by the humans.

The RHINO Project expresses a deep sorrow, cognizant of the suffering that the natural world has endured over ever expanding human greed. This multidisciplinary installment provided a variety of Sarasota’s creatives an avenue of self expression, exploring the human exploitation of the gentle beasts hunted for their ivory, whose population has been cut from over 500,000 at the beginning of the 20th century to 29,000. From Nov. 21 to 23, the Black Box Theatre featured three Dance on Campus performances that reflect the rising enthusiasm for the arts on campus.

Dance on Campus is seeing a dance production sponsored by the Humanities department for the first time; more events are an exciting thing to look forward to as this semester ends and a new one begins.

“There’s nothing like working on a show together,” Dance Instructor, Artist in Residence and Movement Consultant of the RHINO Project Leymis Bolaños Wilmott said. “There’s something really special about the intimacy that grows from that.”

A beginning contemporary jazz class, the Irish step club, Professor of Sociology Queen Meccasia Zabriskie and over 40 students dancers performed in the showcase of their passions at the Black Box Theatre. However, the RHINO Project segment of the programming is part of an ongoing collaborative passion project from a variety of artists from the Sarasota community, primarily from New College of Florida, Ringling College of Art and Design (RCAD) and the Ringling Museum.

“Students get to see what can happen when you’ve been working on something for over a year. Having a layered and rich choreographed class has been really impactful in a positive way,” Leymis said.

The project has been gaining momentum for over a year; beginning with Wilmott meeting with Professor Sheryl Haler of Ringling College’s film department. Haler has frequently pursued themes of myth, nature and nurture during her 27 years working as a faculty member, specializing in the use of cloth and fabric within art. For the RHINO Project, Haler worked as the visionary and costume designer, producing striking imagery through the elaborate costumes, a central piece of the performance. For the dance, all six performers used the costumes to represent an animal. Phoenix Kadzis represented the origin rhino and snow leopard, Rose Schimmel the white rhino and mandrill, Laila Kalantari the red rhino, Ryan Smith the stag, Sierra Lamb the tiger and Diego Villada the lion.

The first installment involving the RHINO Project was a live iteration at the John and Mable Ringling Museum Thursday, Sept. 26.

On Tuesday, Oct. 29, the film premiere of  “Human / Nature” was preceded by a costume exhibit by Haler. The event, funded by the Andrew W. Mellon Foundation, featured a question and answer panel with the collaborators behind the RHINO Project.

During the three highly anticipated nightly performances at the Black Box Theatre, the RHINO Project’s performance was moving and dynamic. The original composition by Eric Berry was a journey of jungle ambiance and minimalistic instrumentals that accompanied the rise and fall of the creatures and humans presented in the piece.

The piece begins with second-year Phoenix Kadzis rising from the floor to face the light. The solo is emotionally charged, depicting a rhino entering life with a contrast of flowing and jerking movements to evoke the initial fragility of life. Following the solo, Rose Schimmel enters as the White Rhino and performs with Sierra Lamb a duet of budding friendship between human and rhino. The hugs and partnership is disrupted once Kadzis returns as a human, and the two humans capture and murder the white rhino for the ivory horn, as Schimmel’s costume is dismantled and she peforms a solo as a semi-human, semi-rhino scorned by exploit in the last moments of life. Laila Kalantari enters as the red rhino, displaying strength and fury in a powerful performance with the human dancers. Concluding the nearly 25-minute performance, Diego Villada and Ryan Smith joined all in the final gathering of creatures subjected to torment from loss of habitat and poaching.

The film “Human / Nature” featured a different set of dancers in costumes expressing the story inside of the Ringling building, but “It’s been exciting to bring that work onto the concert stage, with theatrical lighting and a full cast of NCF Students,” Leymis said.

The RHINO Project has been an exciting product of programs Connecting the Arts & Humanities and the Cross College Alliance, providing a flexible platform for artists of many stages and types of craft.