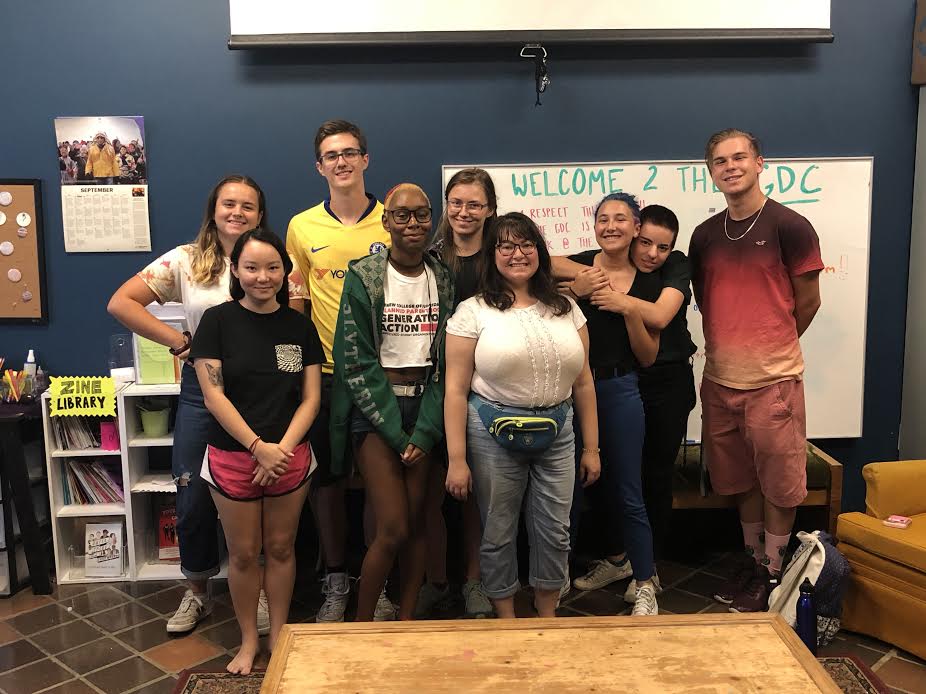 On Tuesday, Sept. 17, a dedicated group of students led by New College Student Alliance (NCSA) Vice President of Diversity and Inclusion Alex Barbat met for the first Council of Diversity and Inclusion (CDI) meeting of the semester. After a summer away from campus, new and old CDI members alike are ready to get back to work making New College a more welcoming and enjoyable environment for all of its community members.

“The CDI is a council under the NCSA that oversees diversity and inclusion on campus,” Barbat explained in an email. “It’s made up of different representatives elected during the year, as well as club leaders and other students involved in similar initiatives on campus. We meet to talk about how the campus is doing in recognizing and fulfilling the needs of students and plan ways to improve our campus in this respect.”

Barbat, who is also the President of Generation Action and the Resident Advisor for New College’s Community Organizer Living Learning Community, has been involved with the CDI for several years now, and believes in the council’s power to positively impact the way New College operates. However, the CDI wants to make some changes this year in order to make that impact hit harder. Improving longevity and extending reach are some of the council’s most prominent goals at the moment, exemplified by several members’ upcoming plans for this semester. Thesis student Mckenzie Cameron gave updates on the focus group she and second-year Gwen Roberts have been attending with President Donal O’Shea regarding accessibility. Cameron and Roberts are committed to improving the way New College interacts with disability and making changes that will benefit the community as a whole.

“Prior to Meighen Hopton leaving, we had one director and one office worker/coordinator, but we only had one person at the school who could write accommodation letters,” Cameron said. “We’re changing it so that there will be two assistant directors, so if something were to happen between you and one of the assistant directors, you could go to a second one. So you could basically appeal their decision and have it go through someone else or just [choose one over the other] maybe if you get along with one of them better, because that’s been an issue in the past.”

Likewise, Queery Co-presidents and Gender and Diversity Center (GDC) Teaching Assistants Freddie O’Brion and Emily Garcia want to better New College in ways that will benefit not just the students of today, but those of upcoming classes as well. O’Brion and Garcia are planning on collaborating with the Office of the Registrar and Information Technology to rework New College’s email system in a way that lessens anxiety for students with different legal and preferred names. After speaking with Professor of Gender Studies Nick Clarkson about college email systems and how they work differently at every institution, O’Brion and Garcia developed a potential solution.

“Probably the most effective method would be to change the emails to instead of being first name and last name, to being first initial, middle initial and then last name, so that’s the angle that we’re taking right now,” O’Brion said.

In terms of expanding the percentage of New College’s community that can benefit from CDI members’ work, Barbat has big plans for Day of Dialogue. This upcoming year, the event will take place in late February to make sure faculty members have enough time to work Day of Dialogue ideas into their classes and to ensure everything runs smoothly. Day of Dialogue’s theme this year, “Taking It Back to Basics,” focuses on empathy, mutual understanding and most notably, the respectful transmission of thoughts and ideas between groups who share different identities and beliefs.

“We’re trying to take less harmful disagreements and get to a place where people can talk about that more safely and openly,” Barbat said. “The goal is to get [non-students] more involved because I don’t know about staff and upper admin actually, but I know a lot of resistance has come from faculty.”

CDI members agreed, voicing concerns about Day of Dialogue historically being primarily both led and attended by students.

Similarly, second-year Jess Franks plans on addressing concerns that go beyond the student body through her work as Police Liaison this semester. Franks is hoping to improve student-police relations and create spaces for better communication between officers and the rest of the New College community.

“Our long term goal is to do more event type things where students can voice their concerns and things like that,” Franks said. “I’m probably going to make some type of questionnaire to send out to people because there is a form to complain about a specific incident, but maybe [there could be one] for general things they’d like to receive from the students as well.”

Although the CDI will have to work hard this year to achieve their goals, members know the importance of the work that they do and the lasting effect that it will have.

“I really enjoy the idea of a space that’s dedicated towards listening to marginalized voices on campus and trying to think of ways to provide resources, or just to improve the state of our school so that it better fills everyone’s needs and makes people’s voices heard,” Barbat said.

CDI meetings are open to all students interested in fostering an environment of diversity and inclusion on campus, and take place every first and third Tuesday of the month from 6:00-7:00 p.m in the GDC.