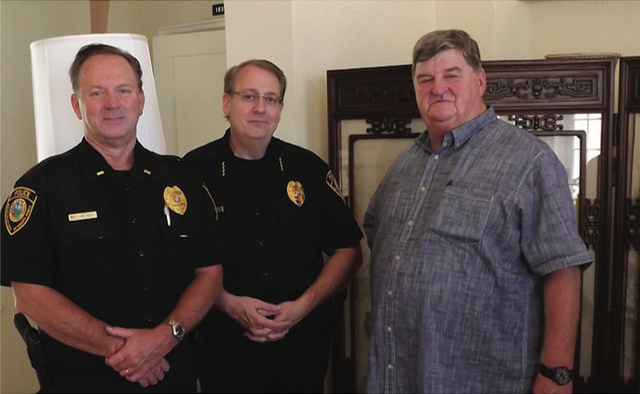 Retired New College Police Department (NCPD) Sergeant Kenneth “Ken” Vickers passed away in the early morning of Sept. 16. A friendly face on campus for 18 years, Vickers is remembered by students, faculty and staff as a warm, kind individual who made lasting connections with those he worked with. In speaking to the students and staff who knew Vickers for years, it is impossible not to hear the intense respect and admiration they hold for him.

Vickers retired two years ago after nearly 41 years in law enforcement. His retirement from New College marked his very first day off the job in 53 years. Services were held on Friday, Sept. 23 in Tampa, and was attended by family, friends, colleagues and former students.

“Vickers reminded all of us that even the cops at New College were unique,” alum Matt Mazzuckelli (‘99) said over Facebook. Mazzuckelli recalled that Vickers “always remembered everything about everyone.”

“And in the rare instance he needed to be a real cop, he could handle shit like a pro,” Mazzuckelli added.

Before coming to NCF, Vickers worked for the New York Police Department (NYPD) for 22 years, retiring as a lieutenant.

“I never heard him make a racial comment or joke, never heard him make a sexist, misogynist joke,” NCPD Chief of Police Michael Kessie – who worked with Vickers for 12 years – noted. “Coming from the 70s when he started, he came from that big city and was able to adapt and come here. That showed what a gentleman he was. His whole life revolved around his family, his daughters, his wife.”

At the time of his retirement, Vickers told the Catalyst that he always enjoyed going to work. He described students as “always interesting, a little crazy, but interesting.”

Kessie recalls that any time a student went missing on campus, Vickers would be able to track them down “He’d know who to call,” Kessie said. “To me, that was true community policing.”

Vickers would anxiously await the return of students while he was on duty during January ISP when many leave campus. Each day he would update his colleagues on how many cars were back in the parking lot.

“He would chase people down and try to talk to them,” Kessie said. “He was so bored, I think kids would actually try to hide from him because he could talk to you all night.

“I think we all consider ourselves to be sort of surrogate parents, but he really took it seriously. I think sometimes he’d rather be here – He loved working the parties, the Walls, PCP back in the days.”

Alum James Birmingham (‘06) worked with Vickers as a dorm patroller for two years. “He gave us the autonomy to do our duties with the flexibility and grace necessary to bridge the pivotal gap between the safety and security of students events and the ‘rules as written’ responsibilities of a police officer,” Birmingham said in an email interview.

“It was a different time and things have changed here but he was a cop’s cop, he had your back, but he really was on the side of the students,” Kessie said. “He would always err on the side of giving the students a break, to the point that sometimes he kind of pushed it.”

“Vickers knew virtually every student’s name, knew how to bend rules for the benefit of the greater community and was more concerned about the welfare of the student body than their career or the wishes of the administration,” Birmingham added.

“I think what he did was really give us a conduit to the student body,” Kessie said. “He had that communication ability. […] He’d walk up and stand at the party and he’d have a whole bunch of students around him. I think he had a connection with students that maybe we’ve lost a little.”

At a time (though certainly not the first) when New College students are questioning their relationship with the NCPD, Vickers’ passing reminds many students and alums of a time when officers were more like friends than police.

“It was a different type of atmosphere when I first got here,” Vickers told the Catalyst in 2014. “It was mostly hippy and goth kids and now it’s changed. It’s just the progression, you know? It keeps changing. Society is changing and the kids change with them.”

“There are all sorts of structural reasons that the relationship between the campus police and the student body has drastically changed over the last several years – but Vickers retiring was chief among them,” Birmingham said.