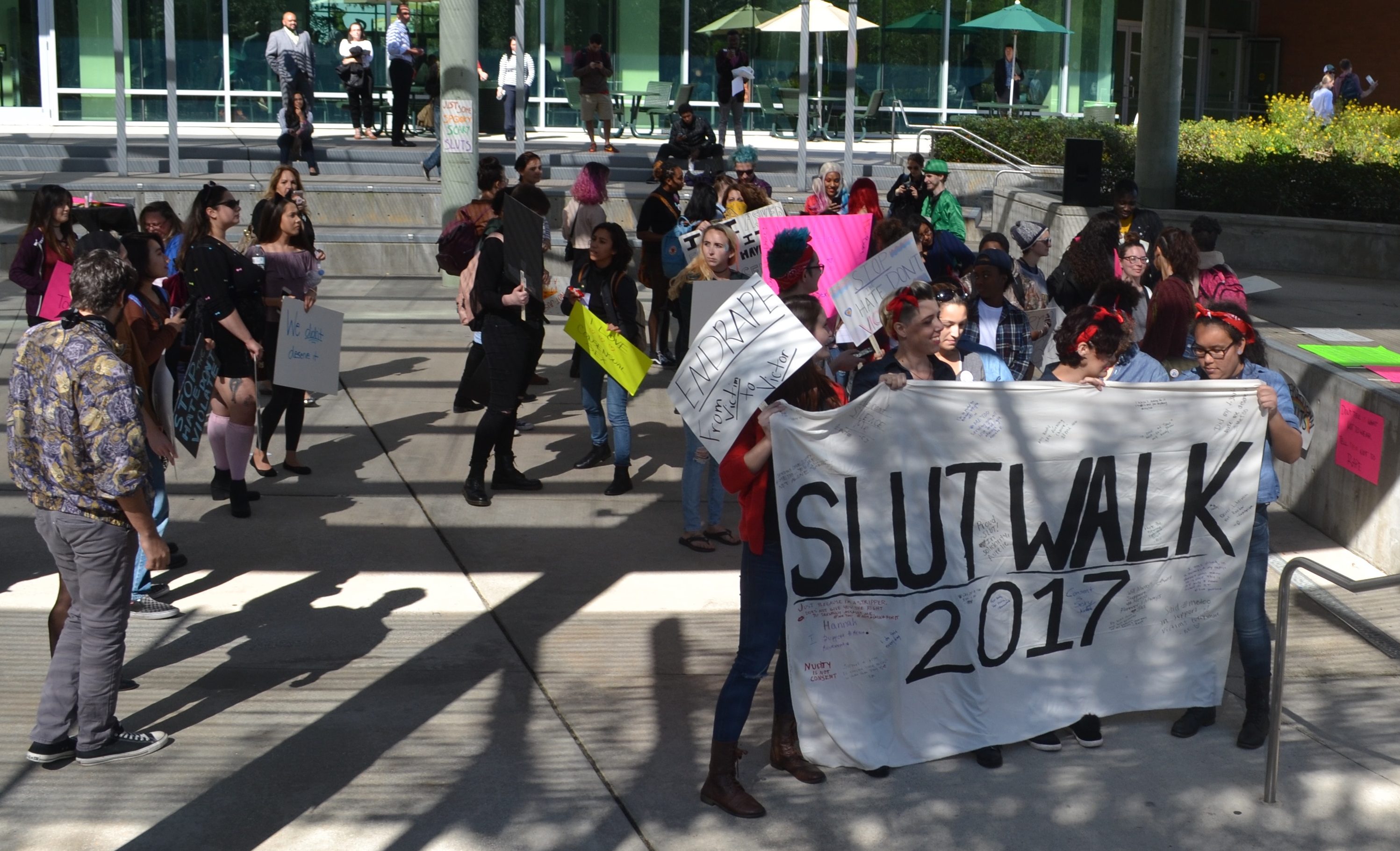 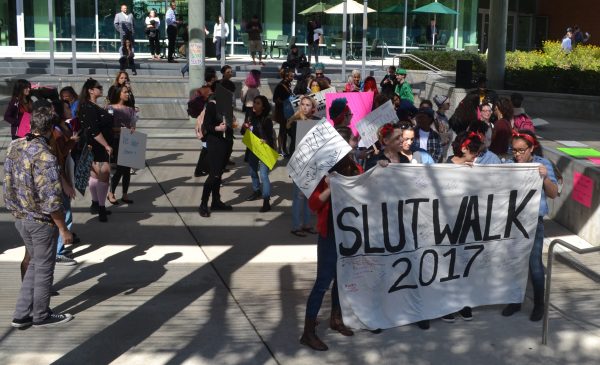 (All photos by Michala Head/Catalyst)

“S-L-U-T all we need is unity,” was one of several of the protesters’ chants that echoed around campus as Safe HOME at University of South Florida (USF) hosted the first Annual Slut Walk at the USF’s Tampa campus. Leading into this event, students gathered in the Marshall Student Center (MSC) Amphitheater to paint signs, enjoy sex positive pop music, snack on the candy and cookies provided, or chat amongst each other. When the clock struck three, the walk commenced.

For the first time, USF-Tampa students and faculty bore witness to protest organized by Safe HOME at USF, against the fact that the university does not currently have a zero tolerance policy in place towards sexual assault. The protest was held on Monday, Oct. 30, as it was centered on commonplace cultural notions associated with how young adults celebrate Halloween, examples being skimpy costumes, alcohol consumption and attending parties. Tragically, these aspects of celebration not only set the stage for sexual assault to take place, but also for sexual assault to be wrongly excused due to what the victim was wearing or whether the victim had drank. 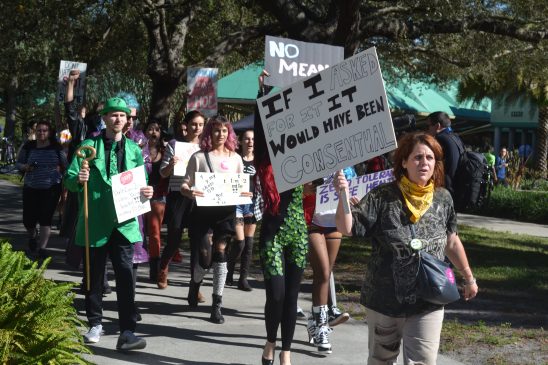 The protest was held on Monday, Oct. 30, as it was centered on commonplace cultural notions associated with how young adults celebrate Halloween, examples being skimpy costumes, alcohol consumption and attending parties.

Safe HOME president, Katie Shrum, spoke about what Safe Home is and the effort behind the organization of the Slut Walk.

“Safe HOME just became an organization last semester, it was for a sociology course on mobilizing for social change,” Shrum said. “We picked campus safety and worked with the Office of Multicultural Affairs (OMA) to create an LGBTQ+ Living Learning Community (LLC).”

Shrum continued, “This semester has been centered on sexual assault, we organized around Halloween given that it is a time when people go out and party, we are seeking to raise awareness and working to institute a zero tolerance policy.” 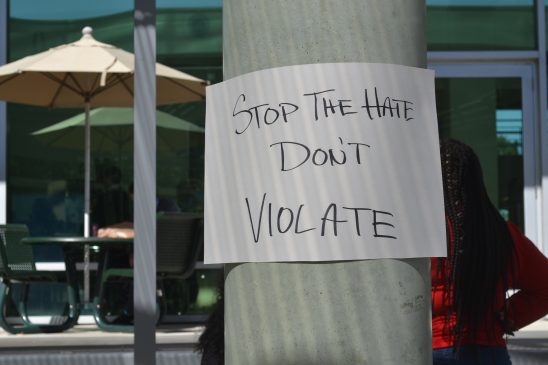 Following the walk through campus, survivors of sexual assault were given the platform to share their stories.

Anyone who has tuned into social media in recent weeks has seen extensive coverage of Harvey Weinstein and scrolled through overwhelming amounts “me too” statuses from loved ones, friends and acquaintances. The Me Too movement was founded in 2006 by Tarana Burke to bring attention to the issue of sexual assault in communities of color.

“[Me too] was a catchphrase used from survivor to survivor to let folks know that they were not alone and that a movement for radical healing was happening and possible” Burke told Ebony. 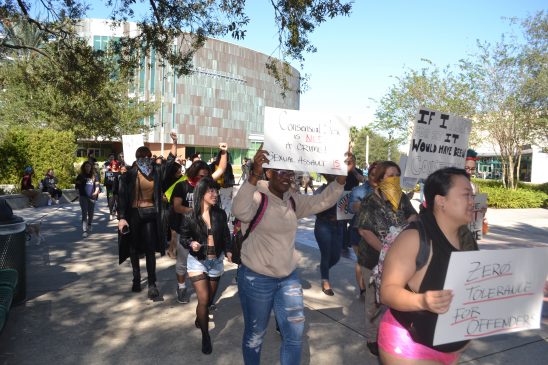 The hashtag #metoo was recently brought to public attention by actress, Alyssa Milano in light of the copious sexual assault allegations that have recently come out against producer and former film studio executive, Harvey Weinstein, by women who had worked with him.

Shrum discussed how the recent Me Too Movement and the increased dialogue about sexual assault came into play with the Slut Walk.

“We started planning [the Slut Walk] in July, and the Me Too Movement came up last week, and we just related,” Shrum said. “Every single organizer of the event could say me too.” 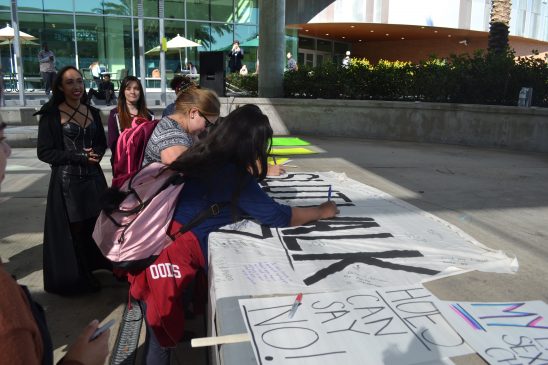 Although the Me Too Movement was unrelated to the original planning of Slut Walk, it was incorporated into the description of the event on Facebook due to its pertinence.

The event was comfortable and fun, as signified by the candy, costumes and music, but simultaneously powerful and informative. Volunteer Coordinator for Planned Parenthood in Pinellas and Hillsborough counties and New College of Florida alum, Marianny de Leon was present at the event and spoke at the beginning about how to become involved.

Following the walk through campus, survivors of sexual assault were given the platform to share their stories. They spoke of having to continue to sit in classes with their attackers, of how deeply unsafe they felt on campus, about how their lives were changed drastically by what happened to them. They brought up the skepticism and obstacles that they had to face when reporting the assault along with the trauma of the assault itself. 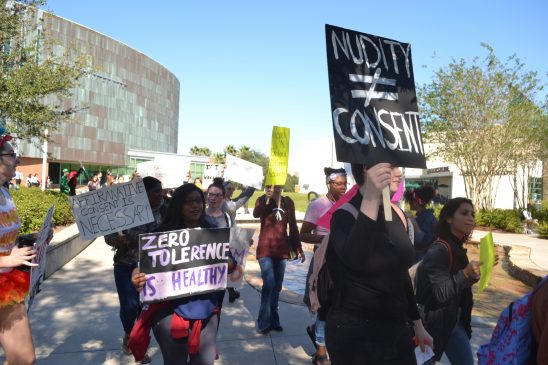 These deeply personal accounts truly gave one the sense of the powerlessness felt by victims not only due to the assault, but also by the constant invalidation and lack of regard for their safety that they face afterwards should they pursue justice. Some brought up how the support of their loved ones is helpful through what happened, but a consistent message throughout these testaments was that not enough was being done by the campus administration or the police to punish attackers and protect victims.

It is not enough to be horrified in regards to sexual assault, work must be done to spread awareness of how far-reaching this issue truly is and to take action against assailants, in the case of college campuses through zero tolerance policies. Shrum brought up the vision in place for Safe HOME at USF, and future work to combat sexual assault.

“We would like to continue working with other campuses and with the community to keep the conversation going. We know that is we work together, we can make change happen,” Shrum said

Information gathered from theatlantic.com and the independent.co.uk