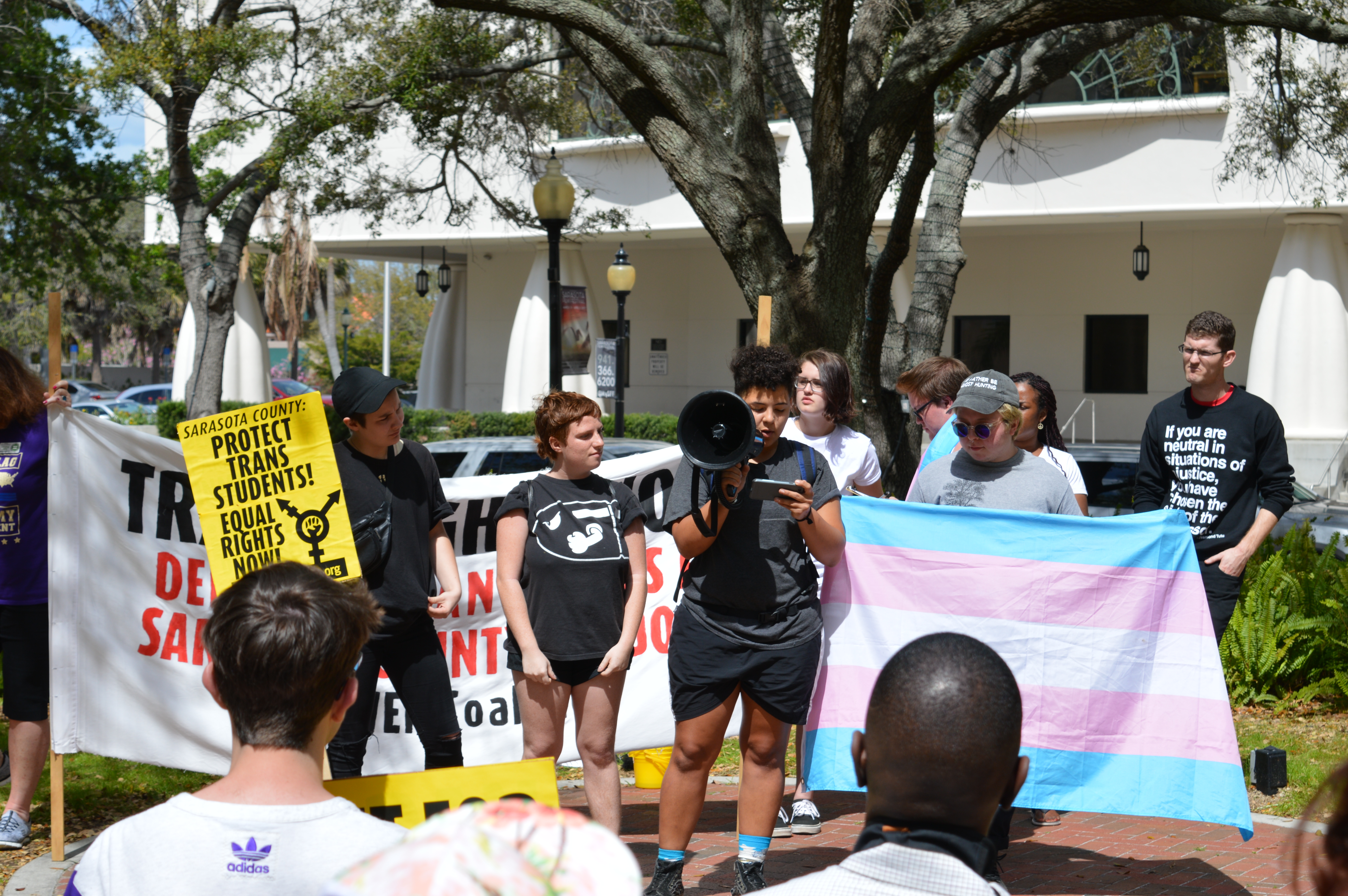 “Title IX hasn’t changed, but the way the Office of Civil Rights (OCR) is going to enforce Title IX has changed,” General Counsel Mike Pierce said. On Wednesday, Feb. 22, the Department of Justice (DOJ) and the Department of Education (DOE) issued a “Dear Colleague” letter that withdrew the statements of policy and guidance aimed to protect gender identity in colleges, universities and schools across the nation. The newly issued letter of guidance infers that state courts are now responsible for deciding whether or not gender identity must be accepted at individual institutions.

Part of the Education Act of 1972, Title IX is a comprehensive law that prohibits “discrimination on the basis of sex” in educational programs and activities operated by recipients of federal financial assistance. The original goal of Title IX was to facilitate equal opportunities within athletics at colleges and universities, but since then, it has opened up national dialogue about gender identity and civil rights protections.

Under the Obama administration, two essential letters of guidance were published: a Dear Colleague Letter on Transgender Students and a letter to Emily Prince from James A. Ferg-Cadima, a main figure in the OCR at the Department of Education. Though neither were technically law, these two letters provided the basic guidelines that the DOJ and DOE followed for including transgender students at federally funded schools.

However, the newly issued “Dear Colleague” letter rescinded the two original guideline letters, reflecting a shift in values within the DOJ and DOE. This shift comes just one month after Trump’s inauguration, raising questions about civil rights protections under Trump’s administration.

What was outlined in the 2016 Dear Colleague Letter on Transgender Students?

During the Obama administration, national debate over the term “sex” prompted the Civil Rights Division of the DOJ and the DOE to clarify a school’s Title IX obligations regarding transgender students. Published on May 13, 2016, an 8-paged “Dear Colleague” letter asserted that the prohibition of sexual discrimination “encompasses discrimination based on a student’s gender identity.” Schools receiving federal assistance, therefore, must not discriminate on the basis of gender identity.

“Any student has full access to the full educational program regardless of sex, gender identity, sexual orientation; it protects a lot more than just sex assigned at birth,” Pierce said.

The “Dear Colleague” letter is not law, but rather guidance for how schools should implement Title IX on campus.

“This isn’t really law, it’s their opinion on how to implement the law on campus. And if you don’t do these things, they come in and investigate and you might lose federal funding,” Pierce said. “Even though it’s not law, it has the effect of really changing the way that things are done on campus.”

The letter was ultimately issued to clarify what was protected under Title IX. In addition to providing definitions for terms such as “gender identity,” “transgender” and “gender transition,” it stated that school staff and contractors must use pronouns and names consistent with a student’s gender identity.

It also discussed sex-segregated activities and facilities, such as restrooms, locker rooms and sports teams. According to the letter, a school “may not adopt or adhere to requirements that rely on overly broad generalizations or stereotypes about the differences between transgender students of the same sex (i.e, the same gender identity) or others’ discomfort with transgender students.”

“[There’s only] one paragraph in the entire letter that talks about restrooms and locker rooms, yet that’s the issue that’s getting the most press,” Pierce said. “It also talks about athletics, single-sex classes, single-sex schools, privacy and education records, it talks about not disclosing someone’s gender identity under FERPA, and a couple of other things.”

“What has happened, from my opinion, is bathrooms are a really tangible thing that people can kind of understand and put an opinion on; ‘I use this bathroom, you use that bathroom,’ but it’s so much more complicated,” Title IX Coordinator Dr. Erin Robinson said.

Ultimately, the letter asserts that when a school provides sex-segregated activities and facilities, transgender students must be allowed to participate in those activities and have access to those facilities consistent with their gender identity.

What was outlined in the letter to Emily Prince?

On Jan. 7, 2015, the Department of Education’s OCR responded to a letter sent by Emily Prince that questioned an unnamed school district’s policy about access to bathroom and the role that Title IX played in the situation. The letter that the OCR issued in response confirmed that when providing sex-segregated activities and facilities, “a school generally must treat transgender students consistent with their gender identity.”

The OCR restrained from giving concrete opinions about the school district in question without first conducting an investigation. It did, however, mention other recent investigation conclusions: “Nevertheless, it may be useful to be aware that in response to OCR’s recent investigations of two complaints of gender identity discrimination, recipients have agreed to revise policies to make clear that transgender students should be treated consistent with their gender identity for purposes of restroom access.”

This letter, like the “Dear Colleague” letter from 2016, verified that Title IX ensures that all students, including transgender students, have equal access to safe learning environments.

On Feb. 22, 2017, the DOJ and DOE, now headed by Jeff Sessions and Betsy DeVos respectively, issued another “Dear Colleague” letter. This letter withdraws the statements of policy and guidance reflected in the 2016 Dear Colleague Letter on Transgender Students and the letter to Emily Prince. This action displays a shift in values within the DOJ and DOE that parallels the shift in national administrations.

“There are a ton of Dear Colleague letters, so the fact that they focus just here really singles out gender identity as not covered under sex,” Pierce said.

The letter states that the reason for the withdrawal is because the documents “do not contain extensive legal analysis or explain how the position is consistent with the express language of Title IX, nor did they undergo any formal public process.”

By rescinding those two letters, the DOJ and DOE have made it easier to deny transgender students rights based on their gender identity.

“What this does, for those schools who don’t protect gender identity, they’re no longer liable for lawsuit,” Pierce said. “It can have a pretty big effect on the way these court cases are decided, but right now this letter says ‘let’s leave this up to the courts’ because they’re still working out this issue.”

“I really do think that they just want the courts to decide the issue, then they’ll go along with whatever they decide,” Pierce said.

How will New College react?

In response to the recent DOJ and DOE action, President Donal O’Shea issued a campus-wide statement of support:

“New College will continue to enforce our regulations and policies that prohibit discrimination based on sexual orientation, gender expression, gender identity and any other protected characteristic under the law. We will ensure that each member of our community has full access to College resources. Even without specific guidance or legal obligations, New College will remain a place where all people are welcomed and appreciated.”

“We always take the more stringent policy,” Robinson said. “So if it’s not necessarily supported by federal guidelines, but it is state, we’re going to look at the state; or if our own student affairs policy is more stringent than federal policy, we’re going to look at our diversity clause and say ‘you’re outside the parameters for what’s acceptable at our school,’ and therefore it will be addressed by our institution.”

Though the recent decisions seem to backtrack on civil rights protection progress, students across the nation are passionate enough to speak up for what they believe in.

“I believe there’s a potential for this really positive silver lining in that a couple steps were taken back, but that could be the forward momentum needed to take law and evolution that much further,” Robinson said.

Ultimately, New College will continue to offer an inclusive space for all students, regardless of gender identity, sex, race, cultural background, sexuality and more.

“What you’re gonna to see is, it’s gonna go up to the Supreme Court, just because the circuits are split; the appeals courts can’t decide on how to implement it, they’re deciding different things,” Pierce said.

“Until it gets there, we’re kind of in a holding pattern.”

Information gathered from justice.gov and ed.gov