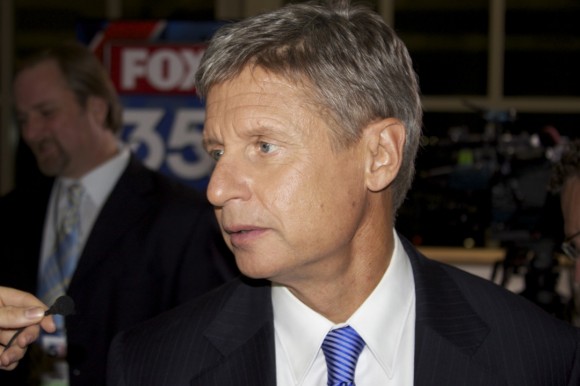 He’s climbed Mt. Everest and has completed the Ironman Triathlon in Hawaii on “multiple occasions,” according to his biography. He served as governor of New Mexico from 1994 to 2003, supports legalizing marijuana and was in favor of repealing the military’s “don’t ask, don’t tell” policy regarding service-members’ sexual orientations. The November 2011 edition of GQ asks if he is “the sanest man running for president.”

His name is Gary Johnson. Perhaps surprisingly, he’s a Republican. And you’d be forgiven if you have never heard of him.

Johnson has found media attention to be a bit hard to come by. Since he announced that he was seeking the nation’s highest office on April 21 via a Twitter message (making him the first Republican to announce his candidacy), most of the attention he’s received has been under the guise of trying to distinguish himself from Rep. Ron Paul (R-Tex.), another candidate and self-described libertarian who is seeking the GOP’s nomination for the presidency. It hasn’t been easy: though Johnson participated in the first Republican candidates debate in May, he was frozen out of the next three due to low polling numbers. Fox News and Google invited him to the Sept. 22 debate despite having no polling data to his name from neither Gallup nor an average of opinion polls synthesized by Real Clear Politics, an online political news aggregator — the Republican Party of Florida even protested his inclusion in the debate.

After the debate ended, many of the candidates delegated their staffers to talk to the press about the evening; Johnson stood shoulder-to-shoulder with members of the press (including the Catalyst) instead, preferring to answer questions directly from journalists. And sometimes they weren’t the answers that were expected — he openly admitted to a need to do more research about issues regarding the Israeli-Palestinian conflict before making a broad-based policy statement on the topic, for example, rather than providing a somewhat stock response about protecting allies at all costs. At any rate, though, he remained affable (even when those questioning him on the Middle East became a bit hostile), seemingly thankful that he was getting some sort of attention at all.

Joking about being happy with the “four minutes” of total time he received on camera during the debate, Johnson agreed to talk briefly to the Catalyst after its conclusion. “I think I fare favorably when light is shined on what it is I’ve done and what it is I’m talking about doing,” Johnson said. “I think young people are very in tune with foreign wars. I think people are very in tune with tolerance, if you will. I am not a social conservative. I support legalizing marijuana. I’m not in favor of building a fence across 2,000 miles of border — that would be a horrific waste of money.”

Johnson also mentioned that he hoped college students were paying attention to economic news, citing a fear that the country was going to experience an “economic collapse” in the near future.

Information for this article was taken from the November 2011 issue of GQ, www.gallup.com, www.garyjohnson2012.com and www.realclearpolitics.com.