On March 6, House Speaker Paul Ryan and fellow House Republicans released their long-awaited plan to repeal and replace the Affordable Care Act/Obamacare (ACA). Despite a wealth of bipartisan criticism, the House Speaker insisted that the opportunity was too valuable to wait any longer. A week later, on March 14, an analysis released by the Congressional Budget Office (CBO) further complicated efforts to pass the bill and breathed new life into pushback efforts when they found that 24 million more Americans would be uninsured by 2026 under the legislation, with 14 million left uninsured by next year.

Notable components of the bill include repealing the ACA, decreasing and modifying premium tax credits by 2020, increasing the ration that insurance companies can charge older subscribers compared to younger subscribers and prohibiting funding for Planned Parenthood clinics and insurance plans which cover abortions. 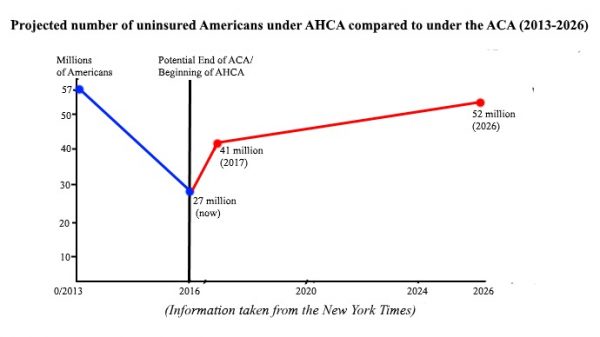 “Thinking of Walter Cronkite, the American healthcare system is neither healthy, caring, nor a system and this plan to me is a direct representation of just how mismanaged healthcare in this country is,” thesis student Victoria McCullough said. “To me, as an uninsured, AFAB [assigned female at birth] person, this plan is draconian and hurts more than it benefits.”

The CBO is a nonpartisan analytical service for Congress that evaluates, among other things, the economic impact of legislative proposals. The analysis is part of a process called scoring, which according to Professor of Political Science Keith Fitzgerald, essentially evaluates “who wins, who loses, how much of a cost.”

“Promising to fix this, without having actually worked on a plan for several years has put them in a real political box, and I think they are rushing something out there that is unique in the degree which it’s making everyone with a stake in healthcare upset, and the only support for this bill I’ve seen other than Republican supporters wanting to be behind the President and Congress is from insurers—Anthem, which is a major insurance company—everyone else hates it,” Fitzgerald said. “But it will undoubtedly, if passed in this form, cost a fortune and take away healthcare from millions of people, and that isn’t going to be something that will go down easily.”

While the CBO’s scoring of the American Health Care Act (AHCA) was expected to leave something to be desired, involved Republicans did not expect it to be as bad as it was, although Ryan was quick to defend the report with the assertion that it showed that “when people have more choices, costs go down.”

“They’ve defined this as a political thing, they’ve demonized the Affordable Care Act for years, they’ve told everyone it’s about to collapse, which by the way is flatly false, one of the things that we’re going through now, which really is not typical of American politics for all the shading and evading and narrating that goes on in politics, flat out lying about policy is not the norm,” Fitzgerald said. “So that makes everyone who has to plan for next year hesitate in figuring out where they’re going to be.”

Since the early days of the announcement of the AHCA, Senate Republicans have been hesitant to support the bill, with some openly criticizing it. Sen. Tom Cotton, R-Arkansas, publicly cautioned his fellow Republicans to table the bill until major revisions were made on his Twitter with the advice to “get it right, don’t get it fast.” After the CBO report was released, the criticism continued as Republican senators told Trump officials, such as health secretary Tom Price, that they wanted to see lower insurance costs for poorer, older Americans and an increase in funding for states with high populations of hard-to-insure people.

“They’re now facing the cost of defining this not as a real policy conundrum, with complexities which need to be addressed, but as a political problem that the Obama administration is responsible for every bad thing that happens in healthcare,” Fitzgerald said. “That was great when they were out of power but now that they’re in power, it actually holds them back from being able to think about how to approach this issue, so I think that this whole bill is a great example of what’s broken about the policymaking apparatus in Washington that partisanship has made sensible deliberation about policy impossible.”

Information for this article was taken from nytimes.org, npr.org, and healthmarkets.com.