Returning New College students faced an unfamiliar scene when they en- tered Hamilton “Ham” Center this se- mester. As planned, renovations occurred over the summer. Dominating the chang- es are the creation of a black box theater in what was formerly the fishbowl and the addition of an art gallery. Elements, a Tampa-based architecture company that designed the greenhouse near Heiser, was hired to complete both projects.

Plans for the black box theater be- gan in the spring of 2009, with funding provided by the state. As its name suggests, the theater’s design is boxlike, with its ceiling, walls and floors painted black so as not to compete with costumes, lighting and sets. More versatile than traditional theater spaces, seating and stage placement can be reconfigured to fit the artistic needs of the performance.

In order to create more space for construction of the theater in the former fishbowl, a wall was taken out behind which was a space previously used as an IT data room. A separate storage room opens up to the parking lot behind Ham Center, allowing for heavy equipment to be easily transported to the theater. Another room outside the theater has been designated as the green room,where performers can get into wardrobe and makeup. Curtains hanging from the ceil- ing will allow for the room to be divided into a separate space for women and men, each with a large mirror and vanity lights. Speakers in the green room enable those inside to hear the show in the the- ater while preparing to go back on stage.

As for the theater itself, mylar floor- ing makes it ideal for dance recitals, for example, as it reduces impact on per- formers’ bodies. Black curtains around the inside perimeter of the theater, with several feet of space behind them, provide hidden access for performers. A staircase near the front entrance leads to a sound and lighting booth, which will be maintained by a technical assistant (TA) delegated to handle equipment specific to the theater. Training sessions will be held for those who wish to serve as black box theater TA. 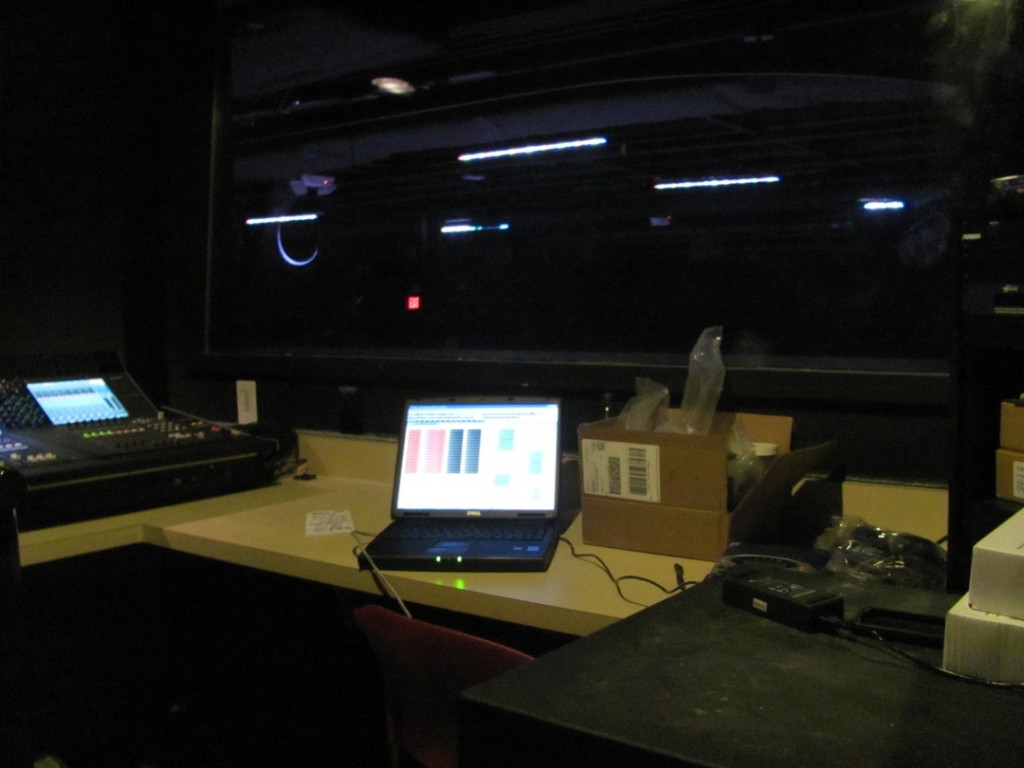 The new theater has aroused excitement in faculty as it creates the potential for growth of the New College theater program.

“The idea that we need a theater space was being discussed, certainly in the division of humanities, for years and years,” Professor of Philosophy and Chair of the Humanities Division Aron Edidin explained.

Since Edidin joined the New Col- lege faculty 20 years ago, theater profes- sors have predominately been recruited from the Asolo Conservatory. Having a theater creates the possibility of a regular faculty member in theater performance studies. “Not that there’s funding for a position like that that we know of…but it can enter into our thinking in a very different way,” he added.

Though the theater will be open for all students to use, priority will be given to students who wish to use the space for thesis productions. “We would do projects all over the

place—in Sainer, sometimes in odd spac-es, we did some stuff outdoors,” alum Sheila Bishop (‘91) reflected. When you’re doing experimental performances it doesn’t really matter but when you’re doing a more traditional play, it gets trickier to use alternative spaces.”

Bishop, who is currently teaching a theater performance class entitled “Performance: In and Out of the Box,”praised the fact that a black box theater in par- ticular was created. With her students, she will be discussing how to determine where the stage is and what relationship one wants with an audience depending on the performance. The flexibility of the black box theater allows for the actual- ization of these topics, which would not be possible even with a traditional stage space.

“I think as people get to really understand what is possible [with the theater], you’re going to see some interesting things happen, from dance pieces to theater pieces to music pieces to things that fall in the cracks in between,” she commented.

While most students have not yet seen the black box theater (as it is scheduled to open today), few could avoid the art gallery. What was previously an open space scattered with couches is now host to two semicircular walls facing each other. The white walls of this new feature, both lined with gray panels on either side, stretch several feet toward the ceil- ing. Concentric hangings carry a series of lights to illuminate both the inner and outer panels. As the walls do not touch, there are two aligned spaces from which to enter and exit, creating a partially enclosed area. 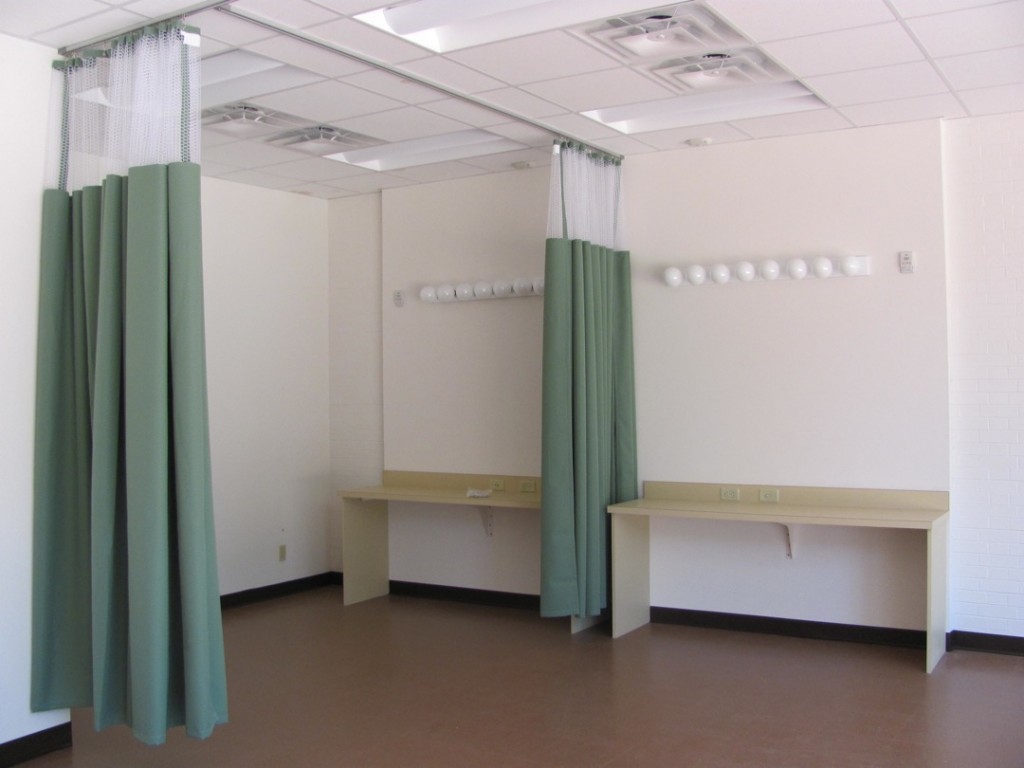 The art gallery acts as a lobby space and transition from the theater, though its use is hardly limited as such. New College Senior Architect Jack Whelan, who acted as project manager for the Ham Center renovations, as well as Dean of Students Wendy Bashant emphasized that the space is flexible in its use and that is up to students to determine what that use will be. Bashant sees the gallery as an opportunity for student artwork to be displayed closer to where many stu- dents live, as opposed to the Caples Fine Arts Complex. The gallery could also be used to hold meetings and the panels can serve as a bulletin board for notices.

Although faculty, administration, and a few students involved in the planning approved preliminary sketches for the gallery’s design, not all were prepared for the final result.

“I had actually pictured it being smaller and less obtrusive,” Bashant said. “When I saw it I said, ‘The students are gonna hate it!’”

Chief Justice of Student Court and thesis student Thomas “TM” Mawn, who was co-president during the spring and fall of 2009, was involved in the later stages of the renovation plans. He voiced his concerns during discussions, however the larger plans had already been laid out before he became involved. “At the moment the gallery isn’t that great as a space, but that is because it has yet to be decorated by students,” Mawn told the Catalyst by e-mail. I’ve heard it being called the Jedi Council… it definitely has the potential to be really awesome.”

While several first-year students were unconcerned about the look and placement of the gallery, many older students consider this addition to be an architectural defect, including thesis student Sarah Thompson.

“It blocks the flow of [Hamilton Center],” she griped. “I feel like it’s not as useful of a space as it was before.”

Interestingly, one goal of the gallery was to draw more students to what those involved in the planning felt was an un- derutilized area.

Students displeased with the gallery think it an eyesore. Whelan, who is also an architect, said he understood the neg- ative reactions toward the structure, but thinks once artwork is added to the walls, the gallery will appear less offensive.

“It is the only circle in a very rec- tilinear building,” he said. “It’s kind of a contradiction in form so in a sense it does create an interesting focal point and it becomes more interesting once we start to see some color, because then it has a purpose.”

As for the black box theater, student opinion is yet to be determined. Of concern has been the loss of the fishbowl, especially in relation to PCP events, with students wondering whether or not these events will now take place in the theater. However, in an e-mail to the Catalyst, Bashant confirmed that the theater has “been reserved for PCP.”