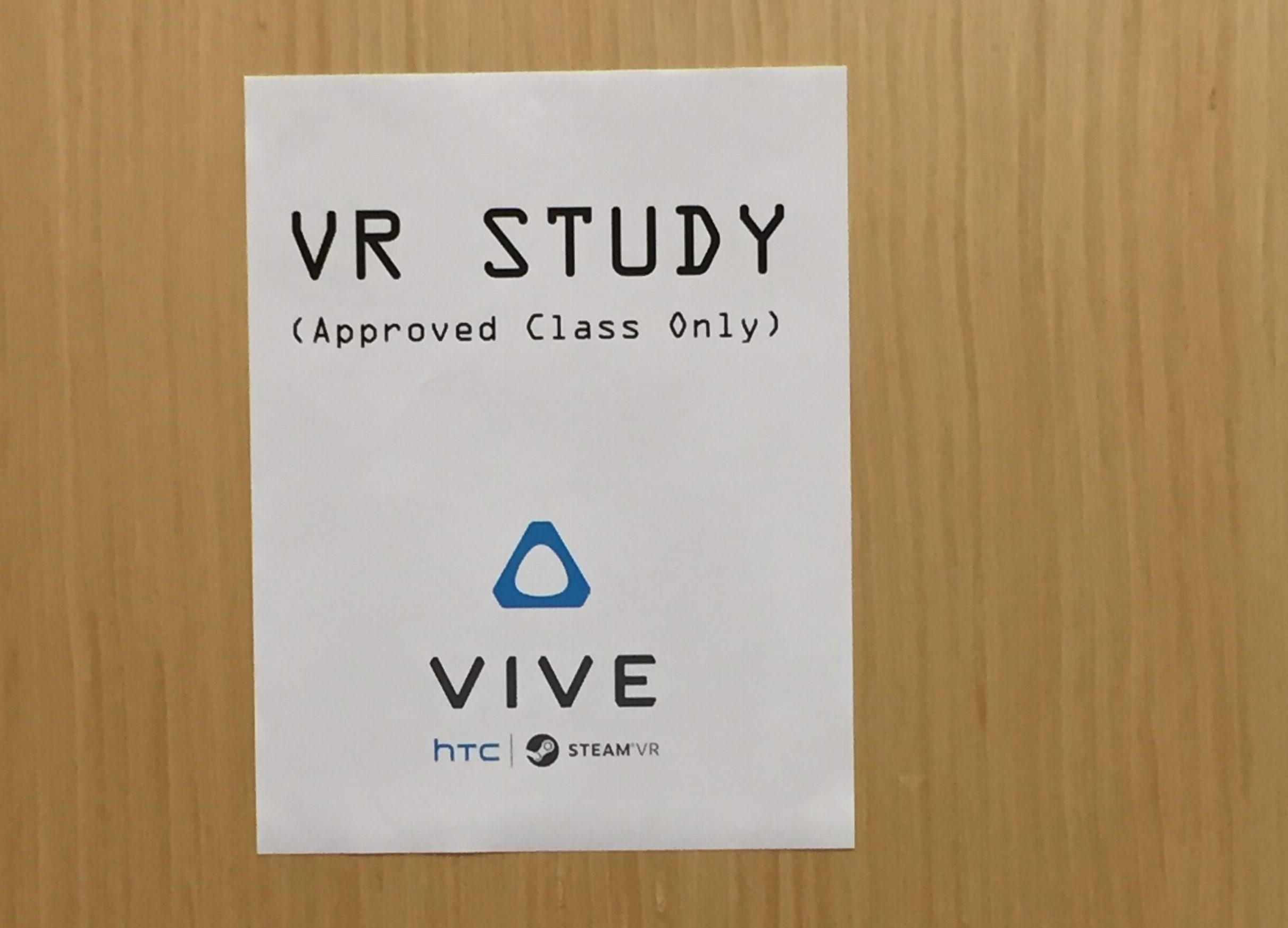 A close-up image of a portrait of Dan Dan (Osking’s actual, recently deceased, dog) found in the living room setting you can go through in the game.

New College has seen an introduction of virtual reality (VR) in the past, with a student incorporating it in their thesis a few years back. Now the modern phenomena has drawn interest for Computer Science Area of Concentration (AOC) thesis student Hunter Osking, Professor of Anthropology, Uzi Baram, and a number of students who have joined the first ever “Virtual Reality Community Project” tutorial.

A new VR Lab in the Jane Bancroft Cook Library was established only a month ago and will first be used in an effort to remodel the historical Charles Ringling Mansion, commonly referred to as College Hall, showing a bright future for New College’s possibilities.

Alum Alexis Santos (‘12) worked on his thesis with Baram, which involved creating an archaeologically relevant smartphone app that allows the user to view what a landscape looked like in the past, like time travelling vision.

“He had done a project on a little town on the Manatee River that’s no longer there,” Baram said. “It does a neat thing where you look through the lens of your phone’s camera and you see the historical photo.”

Due to this thesis work, Baram was enlightened on the matter of VR, then began using the technology in his own research projects afterwards. Baram and a VR-savvy team worked together recently in remodeling Fort Gadsden, renamed Prospect Bluff, that’s found near the Apalachicola River and was hardly heard of beforehand.

“I was trying to get students to work with it [VR], but I wasn’t having much luck until Hunter contacted me,” Baram said.

A music festival is where Osking first encountered VR, at a VR booth in which the man stationed there convinced Osking to learn VR for the possibility of being hired. Since then, Osking has been dead set on VR, but even better, he believes in augmented reality (AR).

“I want to get a HoloLens… but it costs a lot of money,” Osking said. “That’s the future for sure.”

Instead of covering one’s entire field of vision, AR adds to one’s perception. Microsoft’s HoloLens creates holograms into one’s reality, which is why it’s considered a “mixed reality” of sorts. However, with the funding available, VR is the greatest possibility for Osking and New College at the moment and a lot of work can be done with it.

Baram, having studied the historic architecture of the Charles Ringling Mansion–built in the 1920’s–thought what better opportunity to work with VR than the historical building we have access to right on campus.

“It’s [College Hall] on-campus, easy access, it’s a historic building… and it’s big. There’s actually a lot to do here,” Baram said. “I think once we have the VR people will actually be really interested. It has that wow factor to it.”

The community project tutorial is currently underway as a second module tutorial with only a few students registered for it. Each student is expected to complete three online tutorials to practice the basics of VR, as well as two renditions of College Hall by the end of the semester. So, five VR products in total. Overall, the community project is aimed towards inciting interest in not only the importance of College Hall–in many regards–but also for VR in general.

“To kind of have a multi-year project, we’ll have lots of students get the opportunity to actually do the documentation of a place using the newest technologies,” Baram said.

The remodeling will be based on the earliest documents New College has access to, the archives from when the mansion was purchased back in 1960. The group hasn’t yet decided on exactly what version of the mansion will be replicated, but it will be of what College Hall may have looked like, as accurately as possible, when it was a library for the school.

“We don’t have the original blueprints for the building. The earliest is from the 1960’s, but that’s something,” Baram said.

The VR equipment was purchased thanks to funding from the College Art Association (CAA), which granted Osking $1,500 toward the end of the spring 2016 semester. Sitting in the VR Lab, now located by the Quantitative Resource Center (QRC) and the Media Lab, is the HTC Vive, which includes a headset that uses “room-scale” tracking technology and large motion-tracked handheld controllers. The program run for VR projects is Unreal Engine 4, a well-known, recently developed gaming engine. Osking is currently the only individual with full access to the VR Lab, but is eager to have anyone interested contact him for the space’s use. He has even purchased interesting VR games that will be available in the VR Lab, such as “Superhot” where time moves when the player physically moves.

“For my thesis I’m making a game and I’ll be testing out the voice recognition mechanic of it,” Osking said.

Specifically, the player in “Flowers for Dan Dan,” Osking’s thesis game, would have to read dialogue options aloud for a more submersible experience. “Dandy”–“Dan Dan” being a nickname–is the name of Osking’s actual pet dog that recently passed away and the game revolves around this tragedy in a regular house setting. The game would be created using the same technology used for remodeling College Hall virtually.

“Ultimately, I think it’s [VR] both a good example of what New College students could do and it makes New College more appealing to people. So, I think it works in both directions,” Baram said. “I think it’s a real credit to the library that they willing to do that [allow space for VR Lab]. I’m really pleased with the students who signed up and I’m really happy with Hunter showing such great leadership.”

VR is seemingly sweeping the world and endeavors such as these within our own community are showing the potential for further projects and opportunities. Students will increasingly start to include VR into their class assignments, Independent Study Projects (ISPs) and theses as time passes and as resources multiply in coming years.