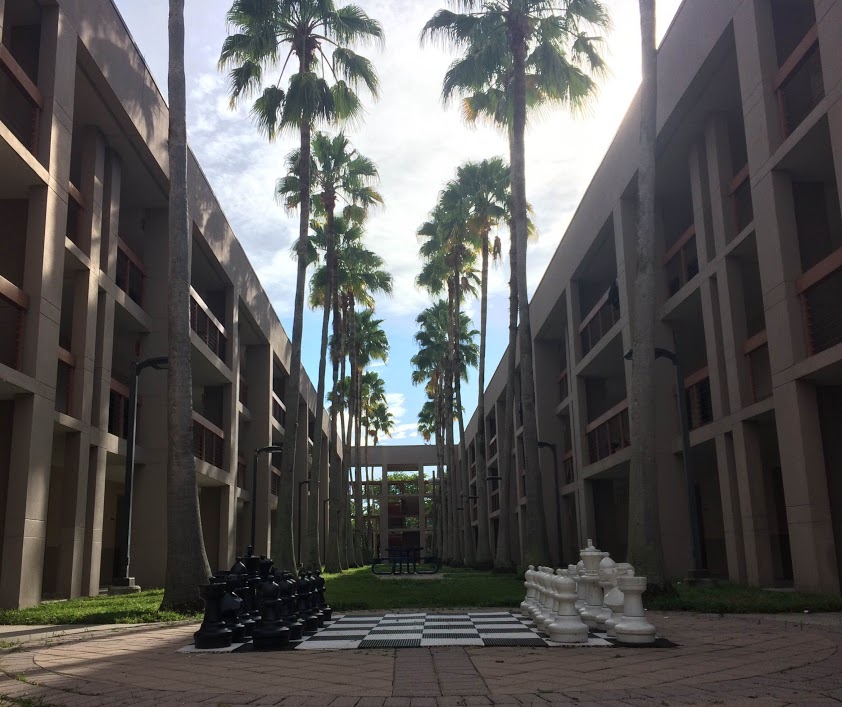 Many New College residents pass by the Dort and Goldstein chess pieces daily, yet few know the somber history associated with them. Though the chessboard has evolved into a quirky symbol of campus community, the game was purchased in memoriam of the late student John Michael Roewert, who was struck and killed by a car on Jan. 18, 2006, during his fourth year at NCF.

In addition to being an ambitious scholar with a passion for knowledge, Roewert was known across campus for his lighthearted character and humor. Jeffrey Riggs (’03), friend and former roommate of Roewert, explained that Roewert was interested in French philosophy, postmodern philosophical thought and the French language.

“He had a true curiosity about him,” Riggs said. “He had a love for wisdom, and that was sort of fleshed out for him with philosophy.”

Roewert was in the process of writing his thesis with a focus on philosophy. His academic goals and heavy workload didn’t restrain his quirky charm, however.

“He had a knack for making improvised French dialogue funny,” Kate DeBolt (’05) said. Debolt admired “the bravado it took to be the class clown in a class you were worried you might unsat.”

“I always admired how ambitious he was, taking on such a big class load all the time […] he was always so easygoing and casual, despite how hard he worked,” Shauna Hoar (’04) said.

Outside of the academic sphere of Roewert’s life, friends remember his passions for music, bicycling and cooking. Roewert also spent much of his time strengthening his mind, either through deep philosophical thought or an intense chess match.

Though Haas was not particularly close with Roewert, his presence – and interest in chess – was notable.

This passion for thinking explains why the school funded a large chess set in his honor. The set was originally purchased in 2005 by alum Matt McCown (‘03) using funds provided by the Student Allocation Committee (SAC). Though the set served as an iconic symbol of NCF, the poor conditions that it faced once posed questions about its continued existence. Several pieces were graffitied and the plastic board itself had various holes and tears. Also, pieces often went missing for several days, only to turn up in unexpected places around campus. Despite this sort of neglect, the chess set remained and resulted in students taking better care of the area.

Roewert was also interested in cooking, a skill he developed while acting in New York City. In addition to working in a New York theater, Roewert appeared as an extra in the movie “A Beautiful Mind” and the television show “Dawson’s Creek.”

“He didn’t have much money so he couldn’t do anything, so he sat around and watched the Food Network,” Margaret Stanny, Roewert’s girlfriend, said.

Stanny explained that Roewert once went on a crepe-making binge, which resulted in the two consuming countless jars of peanut butter and Nutella.

Today, the chess set outside of Dort and Goldstein serves as a symbol of the quirky, intelligent campus community. It also symbolizes Roewert’s eccentric personality and love of life; he loved corny jokes, unusually appreciated the color brown, called his father “Pops” and could do a great duck impression. These quirks come alive in the spirit associated with the chess pieces.

“I think he could be able to say that he didn’t have regrets,” Stanny said. “He accomplished a lot in a very short time … I feel that all he has done adds up to a beautiful and full life.”

Though his life was cut short, Roewert’s personality lives on through the symbolic reputation and spirit of the chess set.