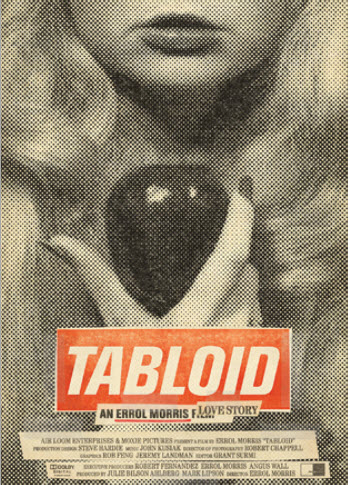 When Joyce McKinney, star and subject of the new documentary Tabloid reached out to the audience at the Regal Hollywood theater on April 16, it wasn’t through some new kind of 3D technology. Like a scene out of the Schwarzenegger vehicle Last Action Hero, the boundary between film and viewer was violently shredded when the house lights came on and McKinney unexpectedly walked out in front of the screen, her tuxedo-clad clone dog Booger in tow. She called upon the audience for a show of hands:

“How many of you really think I raped that man?” she asked.

It was a question at the heart of the documentary film produced by academy-award winning filmmaker Errol Morris. Tabloid tells the story of how McKinney came to be the subject of international attention in 1977 for allegedly kidnapping and raping Mormon missionary Kirk Anderson — she was arrested and charged with these offences in England, then fled the country in disguise while out on bail. The case caused a stir in news media, which was dramatically exacerbated when the British tabloid the Daily Mail published reports indicating McKinney had funded the England expedition with capital she took in as a call-girl in Los Angeles, posing for nude photos and engaging in light bondage and other sex acts for money. McKinney completely denies the factuality of these reports, a fact she underscored when she spoke at the recent screening.

Less contested, but no more sensational is the fact that 31 years later, she paid more than $100,000 to clone a pooch named Booger that saved her life when she was attacked by another animal. It was one of the six offspring that resulted that she brought with her to the theater. While it may seem confusing, it is unquestionably part of the ongoing McKinney story — something which Morris worked against all odds to manage to squish in its entirety into one film.

And yet despite the efforts of this lauded filmmaker, McKinney is convinced her story remains untold. She bitterly spoke out against the work, calling it libelous and declaring her intention to sue Morris over the portrayal of her story, the salaciousness of which she claimed put her mother into a coma upon viewing. At the screening, she professed that her story “still has not been told,” and asked the audience to wait for her version of the tale to come to light. This would take the form of a book she has been working on since the 1977 incident, entitled “A Very Special Love Story.”

What this event revealed, more than the existence of one deranged, deceitful and obsessive ex-hooker or a malevolent, misguiding filmmaker is the complexity and difficulty inherent in trying to construct a portrayal of real life. The basic conclusion to be drawn from how assertively McKinney repudiated this retelling of her story, which in fact did stretch to account for the questionable veracity of all versions of the tale, is that the truth is far from setting us free. Truth, as in much of Morris’ work, is the most elusive of plot points and the hardest-to-read of characters. The chilling realization that some factual version of this story actually played out at a point in history was the most shocking part of McKinney’s unexpected appearance. Whether the audience was witness to a woman desperately trying to imagine her way out of a life sadly sexually twisted or someone fighting a lifetime of extreme allegations is wildly open to debate on one hand, yet grounded in hard facts on the other. Such is the subjective nature of truth, a fact few audience members probably imagined they would confront so dramatically when they walked into the theater, popcorn in hand. But such is the possibility of documentary film, as Morris will undoubtedly continue to remind moviegoers.

A video of the cloned dog Booger and Joyce McKinney is below.