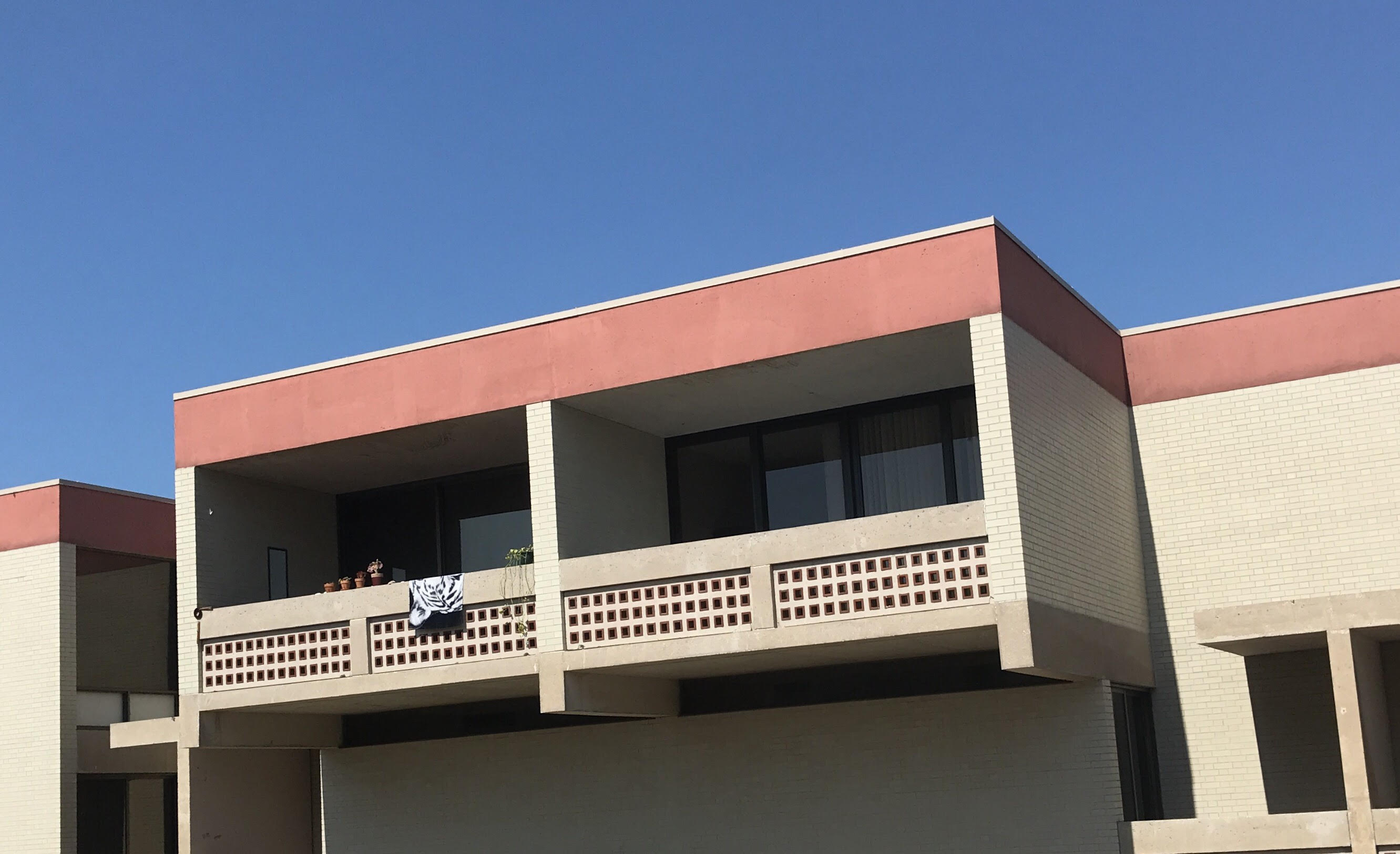 The balcony on the right has been used to test leaks. It has four sliding glass door panes as opposed to three.

Students are aware of the different kinds of buildings and residence halls that scatter the campus, but it’s safe to say that most are unaware of what goes into making these buildings habitable. Flood protection, air conditioning, hot water and Wi-Fi are essentials that are often taken for granted. Director of Physical Plant,  Alan Burr, took me on a tour of the residential side of campus to show and explain the efforts that the maintenance staff take to ensure that the campus functions smoothly.

In most Pei balconies, water drains outward through small holes in the bottom of the masonry half-walls that run parallel to the sliding glass doors. These walls were pre-cast on the ground, then lifted in place.

Sometimes Pei rooms have leak and drainage problems, especially after large storms. Burr and the maintenance staff work to find solutions to these kinds of issues.

“This one here,” Burr said, referring to a balcony on the south end of Third Court, “this one here was set up to drain into the building, so we actually cut drain holes [in the bottom of the balcony] and we re-sloped it from going [in] to going [out].”

Burr took me around the back side of First Court, where the custodial and maintenance rooms are located. He pointed to one of the rectangular banks that line the pathways of the court and told me about how these banks also cause drainage problems.

“This floor was re-sloped,” Burr said. “Originally it was sloped in a way that let water into the building.”

There are cavities under the concrete banks that lead to a sort of “sunken basement,” which hooks into the stormwater system that drains water out from the building.

“If it gets too full, it has a pump. [Water] will pump into the courts and get into the apartments,” Burr explained.

From time to time, the maintenance staff also finds old pipes that are in the floors. Sometimes these drainage pipes leak, which leads to floor flooding.

In most Pei dorms, students have to step up into the room. Conversely, in some First Court dorms, the door is on an even level with the pavement. This difference is the result of pavers being raised to help with flooding issues in First Court.

“This levelling also makes the dorms more ADA friendly, as far as getting in,” Burr said.

There’s a second-floor balcony in First Court that faces east, towards the Dort and Goldstein residential buildings. For most of the year, this balcony had a large construction sheet that covered it, almost mysteriously. As it turns out, Burr and the maintenance team had been installing new sliding glass doors on that balcony to see if it would prevent leaking.

“Sometimes there’s water intrusion […] that comes in through the sliding glass door and then goes through a construction joint in the floor,” Burr explained.

“It comes from the second floor and goes down. We’re trying to get that remedied, but it’s very difficult. We’ve been working on it. We have a sample there that we’re testing and if that works, we’ll apply that to the other ones, but replacing sliding glass doors isn’t cheap.”

There’s one problem: it hasn’t rained much since the new doors have been installed.

“We haven’t had enough rain to really test it, so we’ve taken a hose up there and gone after it.”

In the larger context of drainage on campus, there are various ditches that line the parking lots. These ditches, going all the way back to Dort and Goldstein, all control the flow of rainwater on the campus. All of the ditches lead to a large pond on the west side of the Sarasota-Bradenton Airport property.

“When that thing gets full, it all backs up,” Burr said.

All of the rainwater on the west side of campus gets drained into the bay.

Wi-Fi, IT systems and tunnel entrances

Burr also took me through Third Court, where he showed me a room that contains a giant column of flashing lights, wires and electric devices.

“So this is a little room that we built to take better care of the IT systems that we have out here,” he said.

The room helps provide Wi-Fi to Third Court. In Second and First Court, there are metal boxes that contain the same thing. All of the lights and wires distracted me from what I was standing on – an entrance to the Pei tunnels.

The Pei tunnels are considered to be confined spaces, which means that, technically, there must be a person supervising from the outside whenever someone enters. The person that enters must also be tethered to the individual on the outside.

“It’s a tunnel under an old building, you know, it’s pretty nasty,” Burr said, casually. “There are all kinds of legends and haunts and stories that students develop.

“I think that there’s some graffiti in there too,” he added.

“We have a joint-use chilling plant with our neighbors, you probably didn’t know that,” Burr said.

I asked Burr if he knew how much cold water we take in compared to Ringling. I assumed that we use much more than the neighboring museum.

Because of the dryness standards set to help preserve the art, the Ringling Museum needs a stable supply of cold air. They even ran their system two degrees colder than we ran ours. Recently, however, the percentage of use has become more even.

“There’s a pipe that comes under the highway that brings cold water to all of these buildings,” Burr said.

Conversely, the boiler plant provides hot water for the campus.

Both First and Third Court have a “two-pipe” system, which means that there is one pipe that goes to the unit in the room and one pipe that leaves it. When it is hot outside, cold water goes through it. If the outside air temperature stays below a certain number – Burr uses 65 degrees in a hypothetical sense – then it will convert to hot water and start heating.

“It takes a while to make a conversion, so sometimes there will be a cold snap in the Fall and it will switch over to heat and then it will get hot again and people are uncomfortable for a day or so until it cycles back around,” Burr said.

Burr made sure to emphasize that all of the rooms have operable doors and windows for when a situation like that does occur.

Second Court uses a “four-pipe” system, which means that hot and cold water run to and from the rooms at all times. This system allows for more reliable air conditioning.

“They mix the two to help fight humidity,” Burr said.

“In Pei one and Pei three, there’s a lot of condensation on doors and stuff. You don’t have that in Pei two.”

The boiler room provides air conditioning for Hamilton Center, the HCL classrooms and the residential buildings. It also provides hot water for all of the Pei rooms.

The hour that I spent with Burr helped me contextualize and appreciate things that I often take for granted; drainage, Wi-Fi and air conditioning, for example. Burr is passionate about what he does, and even if there is little conscious appreciation across campus, a lot goes into maintaining the entire campus, structurally, functionally and aesthetically.