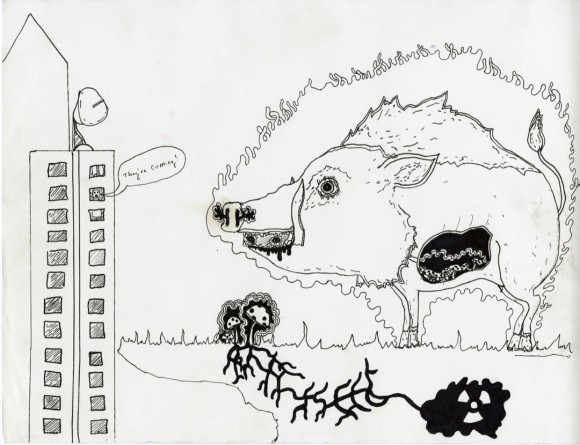 According to Ovid, when King Oeneus of Calydon failed to make his annual sacrifice to Artemis, goddess of the hunt, the embittered deity sent the Calydonian Boar as punishment. The chthonic pig was of great stature and nearly unstoppable, ravaging the crops and forcing everyone into hiding. “Lightning comes by its mouth, and plants are scorched by its rank breath,” according to Ovid. A whole team of Greece’s mightiest heroes was needed to finally put the boar down and restore peace to the land.

Life seems to imitate myth as a war rages between man and boar in modern day Europe. Instead of facing one giant demonic boar, the war is fought with hordes of regular-sized boars whose population is getting out of control. Much like in the classic tale, this blight seems brought on by human negligence. Scientists link the easy winters and abundant crops afforded by global warming with the sudden spike in the boar population. The effects are being seen all over Europe but Germany has suffered the worst. According to The Independent, the boar population in the country has quadrupled since 2007.

As if the sizable destruction of crops wasn’t enough — the boars have destroyed hundreds of hectares of maize and vineyards this year alone — the boars are spilling out of the countryside into densely populated areas. This past June, a wheelchair-bound man was enjoying a sunny day in the park when he was suddenly attacked by a wild boar. In March, a herd of wild boars rampaged through the city of Hamburg. A dozen of them split off and broke through a glass window of a consulting firm. The rogue group caused just over $19,000 in damage before being shot dead, spilling hot pig blood onto nearby copy machines and cubicles.

Germans are frantically searching for a solution to the boar scourge. In September, farmers in the Rhineland-Palatine region asked for military intervention. Authorities did not fulfill that request but they have increased hunting permits to try and curb the population boom.  The increase is largely an empty gesture: hunters shot 650,000 boars in the previous hunting season (over 300,000 more than its preceding season) but the population continues to increase. Complicating the problem is the growing number of irradiated boars. Hunters often find their kill is too irradiated to be edible.

The radiation problem has a surprising source: the pigs’ penchant for truffles and mushrooms. Radiation from the Chernobyl disaster of 1986 has mostly dissipated, but there is still radiation deep beneath the soil. Mushrooms tap into this soil through their mycelium networks and absorb the contamination. As a result, boars that eat these mushrooms become irradiated. Hunters are required to test boars for radiation, and since these boars are not for sale the German government pays out of pocket to reimburse the hunters.