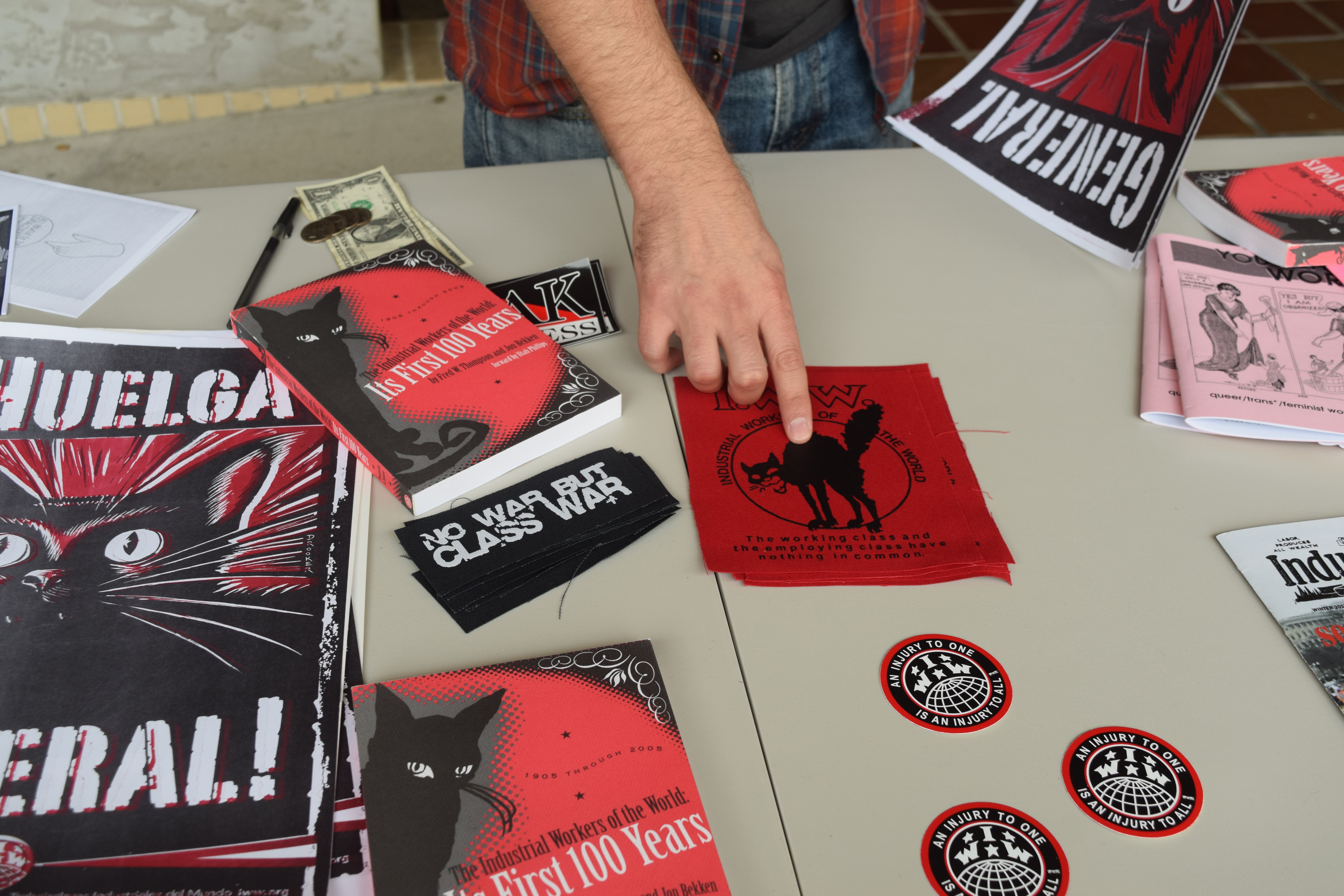 This past weekend, classrooms became a teaching space for the largest radical leftist conference in the South. New College hosted All Power to the Imagination! (API!), a student-run conference that works to bridge the gaps between radical theory and practice. API! was founded by New College students ten years ago, and is held on campus every spring.

This year’s API! included a variety of events including workshops throughout the day, a pop-up book sale, an open mic at Four Winds Cafe, a Cyber-fem Future concert and dance party at Coffee Loft, a plant walk through the residential side of campus and much more.

The conference began Friday afternoon with dinner and orientation outside of Hamilton “Ham” Center, where attendees talked about community norms that would be a foundation for the weekend. The first community norm, written on a whiteboard in green expo marker, stated that: “Racist, sexist, homophobic, transphobic and ableist actions and speech are not tolerated. Hate speech and hateful actions are not tolerated.”

After dinner James Birmingham, a founder of API!, led an Anarchism 101 workshop, keeping with one of the conference’s goals to “be inclusive of those who are not familiar with radical theory and practice.” After a performance in the Black Box Theater by award-winning poet Denice Frohman as part of Sexual Assault Awareness Month (SAAM) programming, the night ended with an open mic at the student-run Four Winds Cafe where students and attendees shared their poetry, music and thoughts.

On Saturday, API! blocked off the morning so people could attend the March for Science in downtown Sarasota. According to the Sarasota Herald-Tribune, over 1,000 people participated in the action, marching over a mile from Five Points Park to J.D. Hamel Park.

API! and the March for Science are both participatory politics, according to Professor of Chemistry Steve Shipman, and “are all about empowering people.” He added that there is always more to do, more critiques to be made of the field of science, as well as acknowledge the wrong things it has done, past and present.

The nonpartisan March for Science took place on Earth Day and was a worldwide action calling for the celebration and protection of science, scientific integrity and science-based policy. The original march took place in Washington D.C. with over 600 sister marches all over the world, including in Sarasota.

As the march ended, people lined up along U.S. 41, waving their signs at the cars driving by. Others walked around the park stopping at the different tables set up by local activist organizations. Students Targeting Oppressive Powers (STOP), a club on campus, manned a table after the march and talked to community members about their work in solidarity with the Coalition of Immokalee Workers (CIW) and its national boycott of Wendy’s. Others gathered around the fountain in the center of the park to listen to the speakers, including Dr. Lisa Merritt, who has taught a recurring Public Health Disparities course at New College.

Professor of Sociology Sarah Hernandez, who attended the march, noted how the March for Science stands up for all sciences, not just natural.

“In popular rhetoric people think of science as one opinion among many and dismiss the fact that science provides a much better proximity to the truth because of the methodological approach behind science and that includes the social sciences,” Hernandez said. “Social sciences are a science and it’s not about what you believe or don’t believe of how to resolve social problems, it’s about what the science points to about how social interaction happens and why it happens and what are the better approaches to address the challenges we face in our society.”

Thesis student Sarah Scully, a core organizer of the march, was pleasantly surprised at the turnout on Saturday and plans on staying involved in the community as she finishes up her studies.

“This march is happening in around 600 cities across the world so that gives me a lot of hope,” Scully said. “That’s a lot of people who are willing to come out today and do things, so if they can keep their energy up, we can change the world.”

After the march, API! attendees gathered back on campus for lunch outside of Ham Center. Workshops reconvened at 3:15 p.m., covering topics including anarchism and apparel, cyber safety, the non-profit industrial complex and the intersection of native rights, mass incarceration and environmental justice.

Angelica Fern, a member of the Georgia Anti-Repression Crew, attended API! for the first time in 2011. This is the first year she hasn’t been an organizer of the conference.

“[In API!] the method of organizing is a reflection of the world anarchists would like to create,” Fern said. The conference is organized horizontally and decentralized so that no one person has all, or too much, power.

The busy day kicked off at 9:30 a.m. outside of Ham Center as attendees prepared for a full day of workshops. Different organizations gave presentations including Tampa Food Not Bombs, ANSWER Coalition and the Coalition of Immokalee Workers. Other presenters gave workshops about self-preservation through self-publishing, do-it-yourself art spaces and politicized collective imagination and radical pedagogy.

Clarissa Rogers, a member of the Institute for Anarchist Studies, taught the workshop on radical pedagogy. It was her second time at New College and at API!

“I kind of fell in love with New College,” Rogers said of her first visit.

In her self-proclaimed “crone” phase of aging, she wasn’t as focused on good things happening. Rogers enjoyed being around the student organizers of API! She said it became “part of my mission telling people, especially young people, that you’re doing a great job.” She felt that didn’t happen enough.

Rogers credited the student organizers for organizing “with so much hard work and intentionality.”

The three-day conference came to an end with a peaceful nature plant walk through the residential side of campus, led by Robert Kelly. Kelly pointed out edible plants and nuts throughout campus as the sun set. Students will have to wait a year to see what the next API! brings.