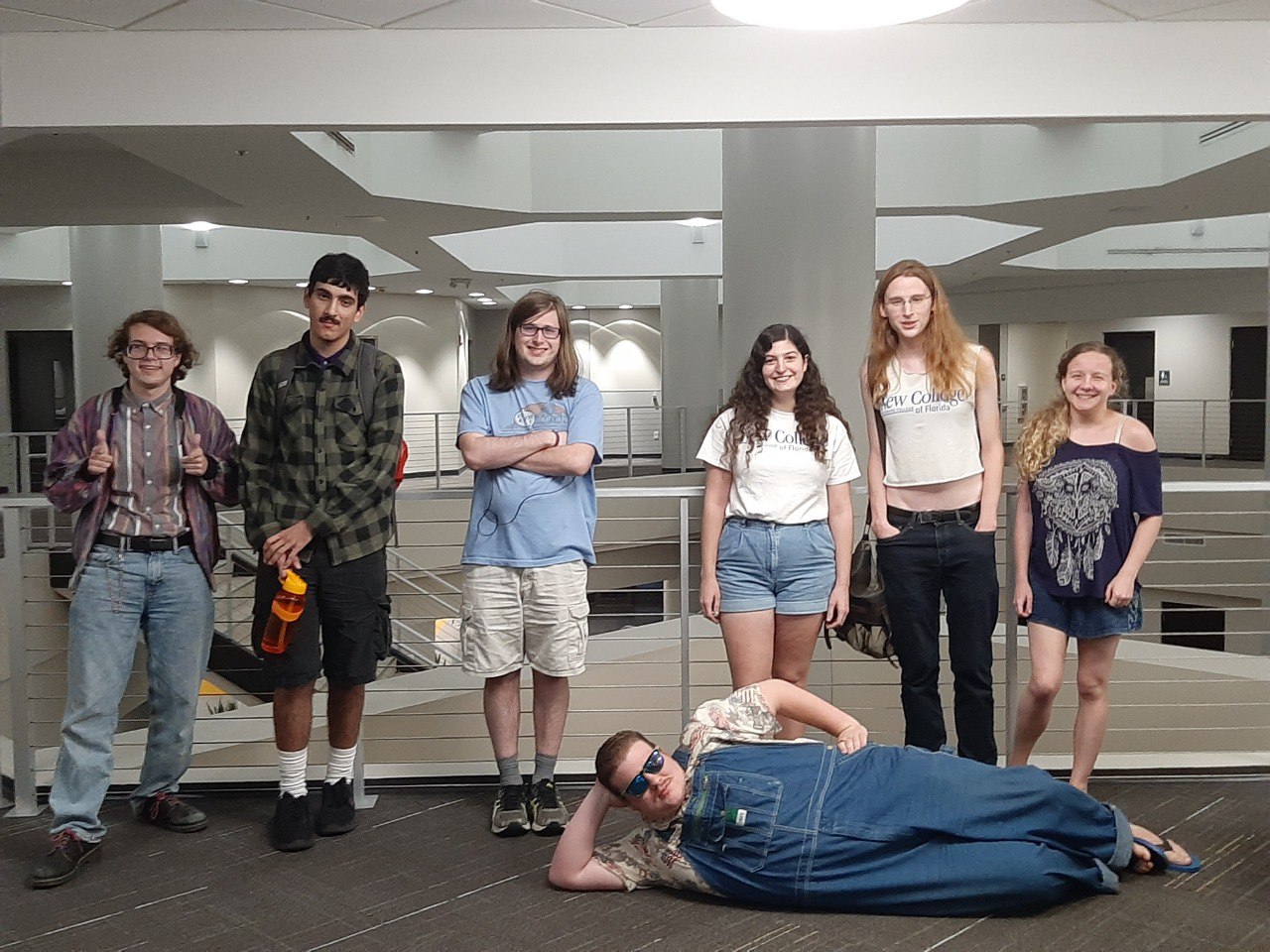 New College is not known for its sports programs. There is a stereotype about Novo Collegians being more erudite than athletic and preferring the air-conditioned indoors to the green sports pitch. While many students break those stereotypes, there is one club where one can live up to it and still bring competitive glory to the college: Quizbowl. The Quizbowl team goes to other colleges to compete in tournaments. On Oct. 5, the Quizbowl team went to the University of Central Florida (UCF) to play the Early Fall Tournament (EFT). Three of the members, all thesis students, scored in the top ten of participants: Harley Andrews ranked fifth, David Honsinger ranked sixth and Chris Coon ranked tenth.

Quizbowl is a trivia game where two teams, each with up to four members, compete to score the most points. Each team is read a series of decreasingly obscure clues which point towards the answer; when a player knows the answer, they buzz in and give their answer. ‘Toss-up’ questions are read to both teams, and often give bonus points if a player answers very early in the question. Quizbowl’s First Consul (the club’s equivalent of a President) Carlos Gonzalez, a second-year, wrote this question as an example:

During a portion of glycolysis, PFK acts as both a reactant and one of these substances. Within these substances, the relationship between the rate of diffusion and reaction is given by the Thiele Modulus. The effectiveness of these substances can be reduced by certain Lewis bases in a process called (*) poisoning. A heterogeneous substance of this type has a different phase from the other molecules in the reaction. In biology, these substances are called enzymes. For ten points, name this type of substance that lowers the activation energy of a reaction without participating in it.

The answer to this question can be found in the largest text on the front page.

If a team answers the question while the reader is still reading the bolded text, they get what’s called a ‘power,’ which means they get 15 points as opposed to the standard ten points they would receive for getting the answer correct after the bolded lines. If the team answers incorrectly, they ‘neg’ and lose five points. As long as the team answers the question correctly, the team receives the chance to answer a ‘bonus’ question. A bonus question consists of three parts, each giving one or two clues as to the answer. For every part of the bonus a team answers, they receive an additional ten points.

Quizbowl players often remember odd tossups they scored on. The first tossup Gonzalez ever scored on was when he answered ‘Mr. Krabs’ at the clue, “[a character] whose appearance online includes waking up in a crowd and body slamming a baby.” Any Quizbowler has myriad wacky stories about the specific knowledge they never thought would be used coming up in a question and earning them the points.

Quizbowl came to New College in 2014. In an interview over Telegram, Leo Law, New College alumnus (’15) and former First Consul, said Quizbowl was “the place where curious people go to see how much they know, learn things they didn’t know about, and just have fun.”

“Just as personal rules, my Quizbowl operates under the hat rule, meaning whenever a player powers a tossup, they receive the Quizbowl fez which they may then proceed to wear,” Gonzalez said over a Telegram interview. “Whenever players neg, I like to give them the Quizbowl wizard’s hat (the wizard of course being our devilishly handsome Second Consull), since I would rather encourage players to buzz on their hunch and get it wrong than for them to know the answer the whole time and never buzz.”

That wizard’s hat has Mickey ears and, like so many other treasures of New College, was found at the Free Store. It has since been thoroughly washed.

“So, come drop by sometime, we are very welcoming,” Gonzalez said. “You will add a lot more to the club than you might expect, at the very least you can meet some cool people, try on some pretty cool hats and flex on your Mr. Krabs knowledge.”

Izaya Garrett Miles is currently serving as the Second Consul of Quizbowl.