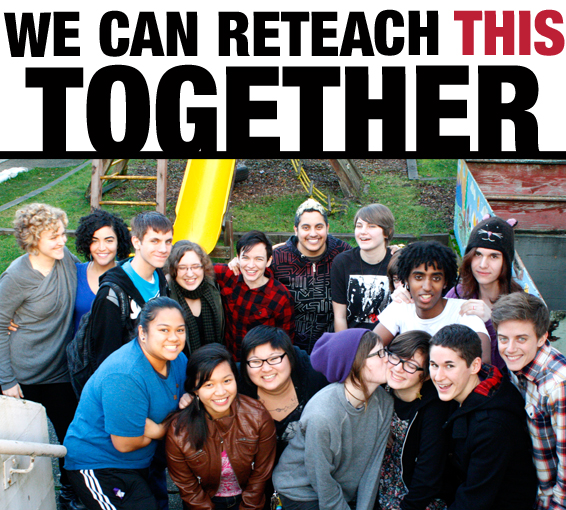 Members of Put This On the Map who are inspired to educate and inform the public about queer people.

Selam Gebrekidan, Sid Jordan and Megan Kennedy, members of the queer youth activist group Put This On the Map, came to New College Feb. 16 and 17 to present their self-titled documentary and to discuss with students the problems that afflict queer youth. The group uses the term queer to define anyone who does not subscribe to binary gender standards.

The group and project began in a suburban community outside Seattle as a conversation between queer youth. After sharing their experiences and bonding over their struggles, they decided to make a movie to give voice to their strife. The film features 26 teenagers from all walks of life who self-identify as queer. The subjects spoke candidly of their struggles and their identities in the hopes of making themselves more visible in their community and relatable to their neighbors, classmates and teachers. The film depicts queer youth speaking eloquently about their problems and trying to effect change for themselves.

“We developed it to be a training tool that we could use locally in our region to train educators and service providers,” Jordan said. “And we’ve been able to have it be seen in film festivals across the world and across the country. To be used as a training tool and a resource besides our own has, for me, already been a major accomplishment.”

On the 16th after the film’s screening, the group asked the audience if they had any questions about the issues that the documentary raised and a dialogue ensued. New College students and Put This On the Map members discussed the importance of having a publicly visible space where queer people can develop friendships and their own community. They discussed the need for more comprehensive sex education that teaches safer sex practices to gays and lesbians as well as the weaknesses inherit in Gay Straight Alliances (GSAs). One Novocollegian said that at his high school, he was the only gay in his GSA. He reflected that he felt alienated and pressured to represent all gay people to the members of the group.

On the 17th, the group met with students at the Four Winds Café to continue their discussion about the issues that queer people face. “We had free coffee and croissants and orange juice and everything,” second-year Katherine “Kejt” Welsh, who brought the group to New College, said. “We all sat down around the couches and we just had a really pretty free flowing and open discussion about being queer at New College. They talked about the work that they had done and their individual experiences being trans and being gender queer. Some students asked questions about how to get involved in queer activism and how to do non-profit work. It was just very friendly and informal. I think they felt pretty good because they’ve done so much work talking to adults about queer kids but they really value just having something friendly and casual.”

“I really loved how I just felt personally really engaged — like we were having a real talk about these issues,” Jordan reminisced. “And it was clear that many of the students at New College have been thinking and living these issues long before we came to have more discussion with them tonight.”

“I think it went really well,” Welsh said. “I’ve gotten a lot of positive feedback and I don’t think that there have been enough, like, radical trans people on campus. We’ve had some trans people come and speak but not in the way that these people did. I think that having young trans people talking about their experience is really good. I think that it definitely filled a gap.”

To learn more about Put This On the Map, students can visit the group’s website www.putthisonthemap.org.