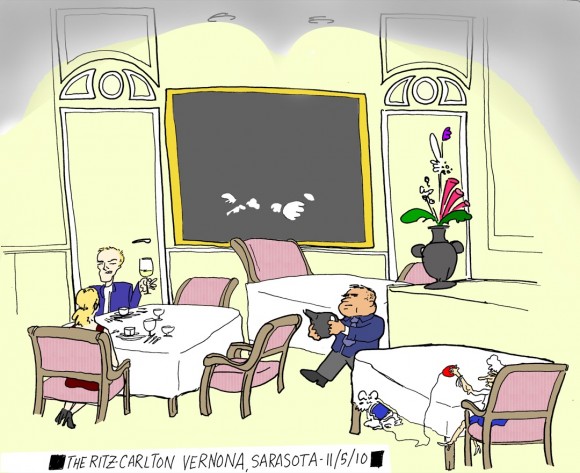 To pastiche Katy Perry: I ate dinner at the Ritz-Carlton and I liked it. The taste of cherry-infused gnocchi — served with a smoky glaze, along with big bites of savory mushrooms.

I liked the chilled carrot soup, served in a urine sample sized rectangular-prism of a bowl, shaped just so as to leave the last drops of orange sludge unreachable. I was enchanted with the demeanor of Hernan as he filled up my water glass every 2.3 seconds, so much like that of some West-Indies-based Bond villain’s right hand henchman.

I chased a 32-dollar bottle of wine with a complementary mouthful of cognac — a Remy Martin XO and Louis XIII blend, the latter of which I was assured retailed for $250 a shot. Driving home that night under such luxurious influence, what could I possibly have had to complain about my dining experience?

But there was more than risotto that hung in my gut. Perhaps it lay squeezed alongside that last nibble of artichoke heart barigougle goat cheese terrine, or maybe it snuck into my stomach with a chocolate-covered strawberry. Though I couldn’t say how, there remained the fact that something didn’t sit right about the evening: I’m not meant for the Ritz, and it certainly was not meant for me. My very presence signaled that somewhere along the line, some social construction that was meant to keep their gold-gleaming salad forks out of grimy little hands like mine had failed.

It’s a conclusion I suspect most of the establishment drew the moment I arrived, as if they could see through my façade of a gray suit coat to the sweat-stained grunge that lay underneath. At best, I entertained the possibility that I simply wasn’t accounting for the sheer wealth of undeserved privilege I had going for me. At worst, I was like some kind of Marxist Uncle Tom, turning my back on the toiling masses for the smallest taste of cuisine bourgeoisie. I would come to understand it was something different all together.

Beyond a shadow of a doubt, it’s true that I was an outlier as I sat in the Vernona’s comically oversized chair. Like any good high-end hotel, at the Ritz the management’s gaze is not only omnipresent, it pervades the space in a tangible way. The decorative design over the employees-only doors at one side of the main dining hall resemble big, wide open eyes, reminding patrons that someone is watching them at all times. Need a water refill? Hernan’s one step ahead of you.  And despite the best efforts of Sammy, my waitress, and the rest of the staff, I felt like I just didn’t fit into the picture of what the Ritz-Carlton was meant to be.

But then again, who does? The Sinatra-heavy soundtrack that filled the air during dinner suggested they were going for the kind of austerity that’s awfully hard to find these days. Certainly the Tampa-based couple at the next table over was no more cut out for a high class eatery than myself, snidely addressing Sammy as the man ordered for his wife (or perhaps his mistress): “She will have the filet.”

With the Rat Pack exterminated decades ago, what is to become of the places tailored specifically for such a ritzy lifestyle?

One of the Tampa-ites asked Sven, an employee who seemed to be primarily in charge of handling desserts, whether they was much business that night, and he responded that things had been a little lonely as of late. “We thought there would be more,” he said, stating his hope that tourist season would bring in a bigger crowd, adding that having fewer tables to watch was “kind of nice.”

As closing time rolled around, no more patrons arrived. The vast majority of tables remained empty on this particular Friday night. Maybe in an economic climate like this, it’s not that I don’t fit in at the Ritz, it’s that the Ritz is out of place in the real world. Outside the Vernona, big dudes wearing hooded sweatshirts drank bottles of Bud Light while a goofy but enthuastic bunch of musicians covered classic grooves like “Boogie Oogie Oogie.” Wasn’t that more like real life than the well manicured lounge I found to be such a novelty only moments ago?

Maybe that’s the point: that suspension of reality can be sweet, even if it only lasts until the bill comes. Keeping that from turning into a toothache seems to require a balance of imagination and humility, the first to allow for indulgence in the idea that your life might just be like that of Sinatra, the latter to keep you from treating your waitress like the real-life peon she very well may be. I reminded myself, who am I to look a gift horse in the mouth, especially when that mouth is feeding me warm apple cobbler with cinnamon ice cream? After all, if the high life does exist, it might as well be at a place like the Ritz. I took my last moment in the building to watch the buoyant, though slightly arthritic ballroom dancing a gray haired couple. No matter what song played, they continued on with their daftly elegant maneuvers, waltzing and fox-trotting while younger, flabbier couples dry-humped all around them.

If I ever get another chance to go back to the Ritz on someone else’s dime, I’ll remember that couple. Despite all appearances, all context, they stayed classy. I think Ron Burgandy would agree, that’s pretty much the best you can do.