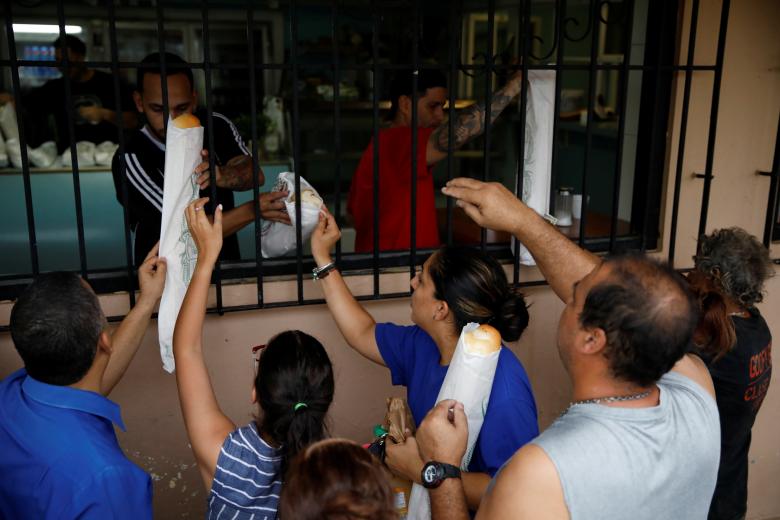 Major relief to the island has not arrived from the U.S. and many are growing impatient with the lack of empathy from Present Donald Trump. (Photo courtesy of Carlos Garcia Rowlins/Reuters)

Category-five storm Maria set its path on Puerto Rico, lashing the island and U.S. territory with 150+ mph winds as it made its initial landfall in Yabucoa around 6:35 a.m. on Sept. 20. The tremendous storm, larger than the country itself, brought with it devastating winds and destructive flooding to all of Puerto Rico citizens could only refer to the island state after the storm as “apocalyptic” in their eyes.

Puerto Rico endured the storm for hours, as Maria tore down buildings, shut off communications and damaged everything that it touched throughout the entire island. Puerto Rico is a U.S. territory, meaning the people who call this place their home are American citizens, however these citizens are having a hard time seeing it that way.

With the storm knocking down all communication and technological infrastructure, Puerto Rico lost 100 percent of its power and left victims in the dark. Many were not able to contact loved ones about their status until days after the storm. My family in Puerto Rico made contact with us from Aguadilla on Sept. 23, with my grandma battling alzheimers we were joyful to hear she was okay, but the worry of her medical state and the lack of power, fresh water and safety on the island has yet to leave our thoughts.

Major relief to the island has not arrived from the U.S. and many are growing impatient with the lack of empathy the President and the leaders of this country seem to be placing towards the islands catastrophic state.

“My people are safe for the most part, there is still no power and because of the concern of robberies they can’t leave their houses alone. Their neighbors sleep on their cars so they won’t have the gas and/or their battery stolen,” second-year Lucille Sanz said. “Now that Trump waived the Jones Act, more relief cargo can finally reach the island–however, a lot of us can’t comprehend how they’re being treated like second class citizens when they are American citizens.”

The Jones Act, a federal law that helps protect the financial interests of American shipbuilders by requiring supplies being shipped through U.S. ports to be carried by American ships, was waived by the Trump administration on Sept. 28, with the waiver lasting ten days. This waiver will facilitate the aid process towards Puerto Rico, since before the waiver shipping supplies and aid to Puerto Rico was doubled in expense.

For many people on the island, this is hope that help is finally on its way, with many citizens on the island salvaging their last meals, last drops of fresh water and medical supplies who have also been without power, communication and even a roof above their heads since the storm–this is their lifesaver.

The entire country of Puerto Rico is in a state of emergency, predicted to be without power for six-eight months, a mass exodus of citizens flying into the states for safety is expected, as aid teams work to restore power and communications.