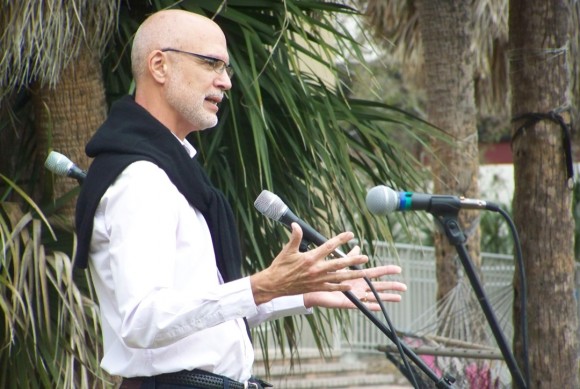 Miles speaks during the teach-in.

“There were things people were saying that I don’t think they’ve had the forum to say before,” Professor of Music and Provost Stephen Miles said. “I think it was beneficial for everyone.”

This statement is in reference to the campus wide teach-in that took place Feb 14. All classes were canceled in order for students to make it to the event. Although the entire student body wasn’t present, Miles was pleased with how many people did show up. “I was very impressed by the number of participants,” Miles said. “I thought it was great to see so many faculty and staff there as well as students.”

The event was just as much for faculty and staff as it was for students. Miles was pleasantly surprised at learning some new things about his fellow faculty members during a group exercise in which participants were required to step forward if they agreed with the statement their moderator read aloud. All three faculty members in the group stepped forward in unison when the question “are you a first generation college graduate?” was asked.

Miles was also happy with the amount of time dedicated to each session, stating that it was “very important” to have an hour of time in the small groups because it took that much time “for certain things to finally surface.”

“There was one person who didn’t speak much until the very end of that session,” Miles said. “When she spoke, it was fascinating. But if it had just been a quick 20-minute session, there would not have been time for that to evolve.”

In Miles’ opinion, it was after lunch that the event reached its “peak in terms of what was shared. People were particularly revealing and being particularly vulnerable and articulate.”

The honesty brought forth by the students touched Miles. “I heard students speak about their pain in a way that no one has been able to hear before,” Miles said. “At least, as a faculty member, I have not been able to hear in quite that way.

“There needed to be a forum for that,” Miles continued. “I wish the entire campus community could have been there, but for those of us who went, we all learned something yesterday. I don’t think we would have learned it in a different forum.”

Miles also believes that the way students behave academically, exercising deep thought and critical thinking, should be echoed in the behavior outside of the classroom.

“We should not settle for generalizations or abstractions,” Miles said. “There’s a consistency in the value of our educational program and the values we want for the community. However, where there’s a contradiction between those [areas], we need to examine that and try to eliminate that.”

Despite the good intentions behind the event, the teach-in garnered some opposition from a number of students. “While consensus is desirable, it’s not necessarily achievable,” Miles said in regards to the less enthusiastic students. “If we waited until everyone agreed that a teach-in like that should take place, it never would have happened. I think the people who attended definitely got something from it.”

Many people may not be wondering, what next? Some may even think that the teach-in solved all the problems initially brought up by students in their proposal of the event. Miles warns against that thought process. “There’s a tendency now to think that yesterday accomplished everything,” Miles said.  “I think that is not true.”

Miles stressed that this needs to be an “ongoing conversation even as we move forward with policies” because the policies alone won’t change everything.

“We need to examine how committed we are to implementing those policies,” Miles concluded.