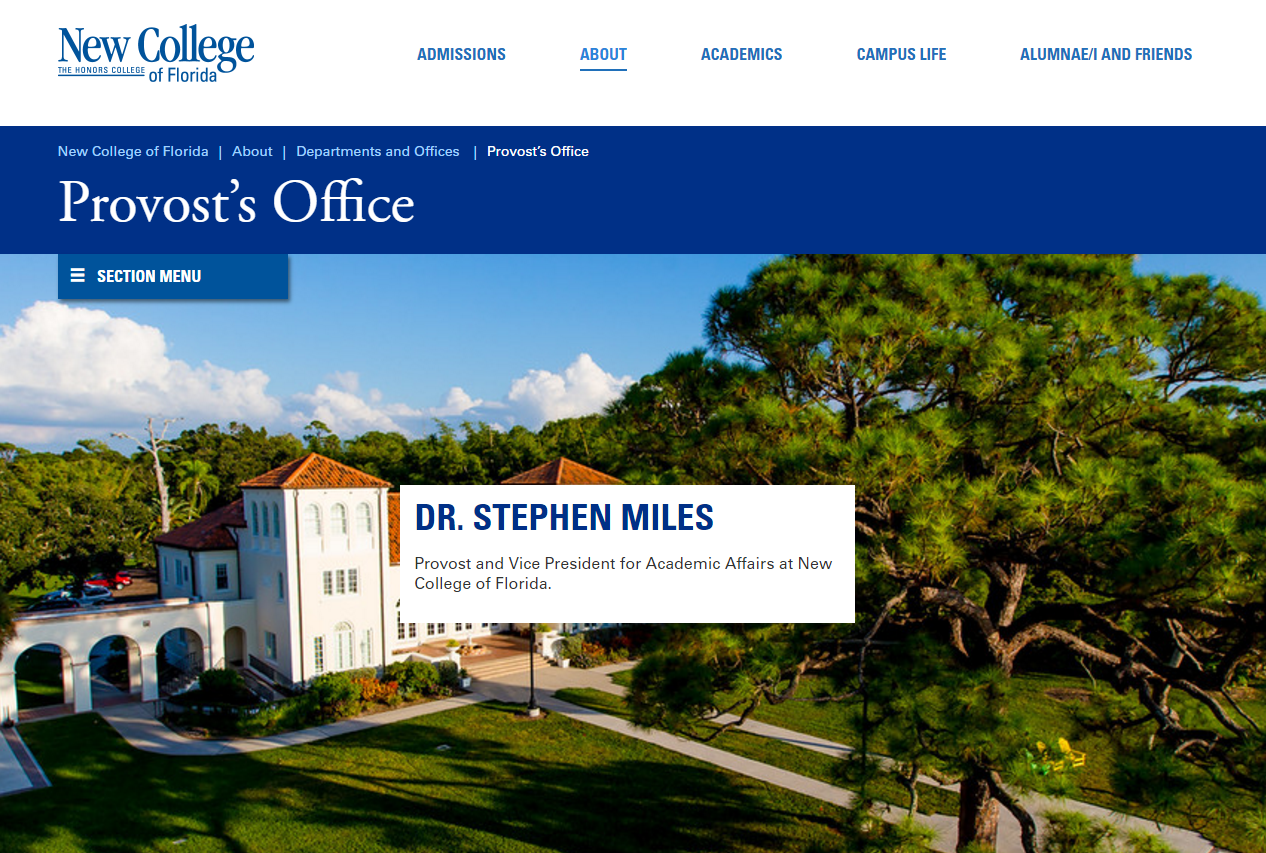 Stephen Miles is resigning from his role as provost after his three year contract ends this year. In June 2017, he will return to his faculty role as a Professor of Music.

The search for the new provost is already far under way. The final candidates have been narrowed down to Rhonda Phillips, Barbara Feldman, James Ostrow and Katherine Walstrom.

“I’ll be sad, because Miles is goofy. I remember at orientation my first year, he sang some song with his guitar about contracts,” thesis student Kasia Burzynski said.

The Provost is in charge of many academic responsibilities at New College. This includes professorial faculty hiring and firing.

It is important that the new Provost would be an academic that professors can respect. They will also need to be able to represent New College at the Board of Governor’s Meeting, where all Florida public school leaders meet.

“The way in which we are judged, the Provost has a lot to do with that,” College President Donal O’Shea said.

The responsibilities of the new Provost will be great due to the proposed expansion that New College plans to undertake.

“We are hoping to expand 50 percent on faculty,” O’Shea said. “The question is what direction to take and where do we put the lines. It is my job to try and get as much money as we can and it is the provost’s job to lead the charge and do a new round of strategic planning.”

“If you ask any particular person, they have got their favorite discipline,” O’Shea said. “It is usually their own, so the provost will need to sort that out and lead.”

How it is done

The applicants were decided on in a multifold process.

“We used [Doug Dittberne of Management Development Search] to answer any questions that candidates that were thinking of applying might have.”

This was done so that before they formally applied, those interested could ask questions off the record. The Management Development Search service cost $10,000.

“It was the first time we ever tried that,” O’Shea said. “I was pleased with the results.”

The next aspect of selection was the New College search committee.

The five people on the search committee were:

Alum Felice Schulaner ’78 chair of the New College Board of Trustees.

O’Shea conducted Skype interviews with all the applicants to keep the process as fair as possible. Much of the interviewing took place in the first part of January, when students have Independent Study Projects. Often times these projects are not on campus. Some students expressed frustration that they, and the larger community, was not more included in the Provost selection process.

“I think it’s important that students are not only on the search committees, but that our input is taken seriously when heard,” second-year Volanta Peng said. Peng attended the open interview of candidate Rhonda Phillips.

“The notices should of been more publicized and sent out earlier,” Peng said.

There were open meetings held that students and the community could attend, but this was only an option for the final round candidates who were invited on campus.

“I don’t think [student and community involvement in Provost hiring] has been any different than the past […] The Provost is the second highest position at the college,” O’Shea said. “So a group that feels the highest claim [to being involved in the selection process] is the Board of Trustees.”

With all the new possibilities and plans in the works, which rest on the decisions of the Florida Legislature, New College’s desire to stay plugged into what is happening on the campus is only going to continue to grow.
The candidates’ resumes may be found online at https://drive.google.com/drive/folders/0B56qO0ZJ8XRjNU9CSnVGNy1zZXc