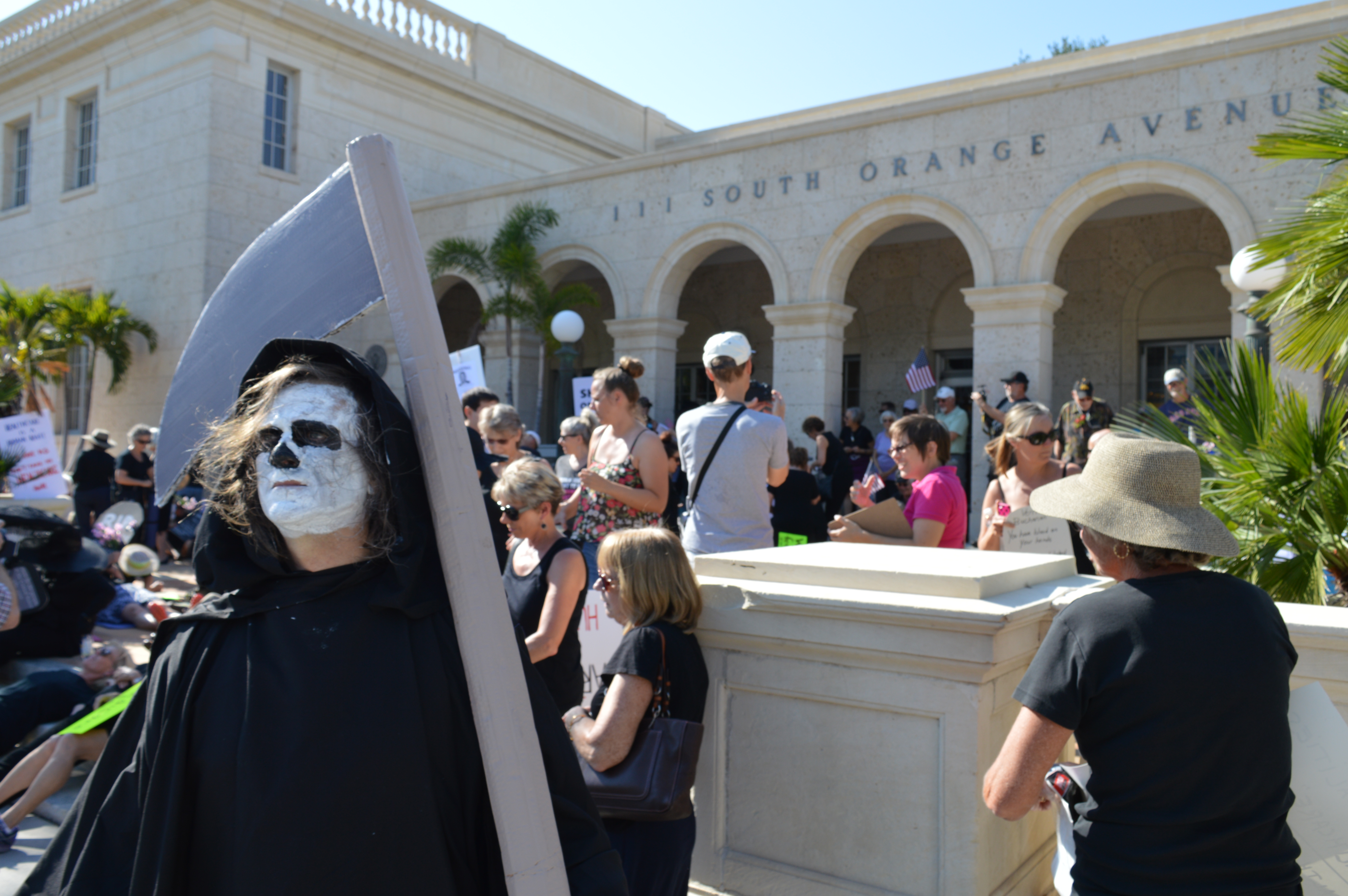 Protestors showed up in funeral attire, or in one case, the grim reaper.

Somber chants and the sound of “Taps” filled the air outside of the Federal Government Office in downtown Sarasota the evening of May 11, in protest of Rep. Vern Buchanan’s vote in favor of the American Health Care Act (AHCA). Nearly 80 protestors attended, wearing funeral attire and holding signs – many shaped like tombstones – above themselves while laying down in front of the building as a “die-in” symbolic of the possibly catastrophic effects the bill may bring.

Buchanan, R-Longboat Key, was one of the leading supporters of the AHCA throughout the first committee votes held on the bill, voting to pass the act through the House Ways and Means Committee on a 23-16 party line vote held on March 6 – despite its unclear cost and impact. After the bill was passed through the House of Representatives on May 4 on a 217-213 vote, despite the Congressional Budget Office (CBO) not having had sufficient time for cost and impact analysis of the act, oppositional responses have ignited across the nation.

Organizers of the “die-in” in Sarasota began their demonstration by leading chants of “Bad Vote Vern!”, “Shame on Vern!” and “Save our ACA!” before mockingly reciting the words of Republican congressmen Raúl R. Labrador, Chris Collins, Mark Sanford and Thomas Garrett, in which the four separately admitted that they had either not read the entirety of the bill, or – in Labrador’s case – had even argued against lack of access to health care leading to people dying. Buchanan, having been a congressman for Florida since 2007, as well as being the 11th-wealthiest member of Congress, according to an analysis by CQ Roll Call, drew the ire of the protest attendees, who called for congressional term limits and the removal of money from politics.

“I’ve been around long enough to know that politicians will take care of themselves, and they care very little about the people,” 88-year-old Sarasota resident Julian Koss said. “We have to get money out of politics, we have to change the way people campaign and how long they can campaign, we have to listen to the people.”

Despite the disadvantage of having the task of opposing the legislative doings of a supermajority Republican government, Koss stressed the importance of the fight, as well as youth getting involved with local activism groups to effectively impact the government on the ground level. He also stressed the need for compassion in involvement, condemning Hillary Clinton and the Democrats for not reaching out the “overlooked” people of America.

“I did not agree with the people that voted for Donald Trump, but I understood why they voted for him, and I have compassion for their plight,” Koss said. “The politicians, the Democrats, overlooked them. Hillary Clinton didn’t go to small towns and villages and go to homes – poor homes – and sit down and ask ‘what can I do for you? How can I help?’”

The protest unraveled after a little over an hour, as the attendees either walked around the building, stayed posted out front with their signs and chants, or left. While the crowd thinned out, many protestors remained, either speaking with another or trying to encourage passerby’s to contact their local representatives about their feelings regarding the AHCA and the Trump Administration.

“I think the people of the United States, as a whole, whether we are Democrats, Republicans, or Independents, are getting a short stick,” Koss said. “I have three greatgrandchildren – two of them were just born a month ago, and one’s four years old. I’m concerned – I’m worried, about my country, and what I have enjoyed for my country being there for them.

Upon the crowd’s dispersal, nearly all attendees stressed continuing efforts, with some of the protest’s organizers plugging other opportunities to become involved in local activism.

“I want to encourage you at New College to get together with Indivisible and Answer Suncoast Together on Facebook,” protest organizer Jayne Lemli said.