Saturday, Feb. 18, was a bad day for a Trump supporter driving through downtown in a convertible. Shortly after noon, anti-Trump and anti-fascist protesters took to the streets of Sarasota from Five Points Park, marching through the weekly downtown Farmers Market and even halting traffic on busy roads including US41.

Members of the New College and extended Sarasota community joined together on Saturday afternoon in a protest organized primarily by ANSWER Suncoast and Stand Up Fight Back SRQ, two local branches of anti-racist & social justice groups.

The Facebook event page, which circulated much of the awareness for the protest with over 1,600 expressing interest in attending, touted a diverse agenda of issues that the event would represent.

At the event itself, all of these issues were represented in some form. Protesters carried signs with slogans ranging from national issues like reproductive rights, to more local ones such as the Sabel pipeline.

The protest began with a gathering at Five Points Park, where organizers and members of the rally gave speeches and began organizing the march.

Dr. Nik, a Sarasota resident known for his decorative bicycle creations dispersed across town as well as for his puppeteering performances at the weekly Farmers Markets on his “peace bike,” skipped the latter half of the market to join in with the rally and ride with the protest.

“He’s not my president. He’s crude, rude and lewd,” Dr. Nik said. “The bigger problem is the people who voted for him. I can’t trust their judgment.”

“We can’t go up into Congress and shake the Republicans. I have to look for the now. I ride around on my peace bike, make peace signs at Lido Beach. This is what I can do,” Dr. Nik said. 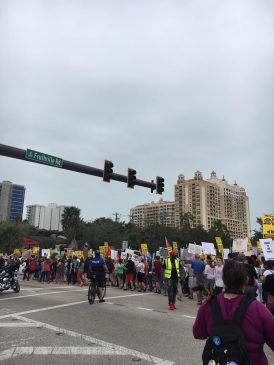 Shortly after the preliminary rally, protesters lined up en masse and marched directly toward the Farmers Market. A group of anti-fascists, identified by their unified black clothing, led in the front with flags bearing the anti-fascist symbol as well as the Palestinian flag and the flag of the Soviet Union.

“Say it loud, say it clear, refugees are welcome here,” the protesters chanted as they entered the Farmers Market.

Many of those attending the Farmers Market who witnessed the protest clapped and shouted in support as it passed by. Many just stared. Others were vocal in their distaste for the protest.

“Find some place else to do this shit,” one man yelled from a bar.

One man walked along the protesters as he made his own way through downtown, complaining about the ineffectiveness of the protest and how the protesters were wasting his time on his lunch break.

“What goes around comes around,” the man said.

“Let’s hope so,” a protester responded.

Thesis student Scott Smedley reportedly heard someone yell to the protesters that they could “fight Trump without supporting genocide,” though the context was unknown.

There were also reports of someone who opposed the protest, and who attempted to knock signs out of protesters hands.

“They were trying to provoke people to fight,” thesis student Sophia Schultz said.

Despite all of this, the protest remained peaceful and unified. Police followed the protesters throughout the march and controlled traffic. Many of those who were held up in traffic as a result of the protesters expressed their agreement with the march.

The protesters walked from Five Points Park onto the Farmers Market on North Lemon Avenue and onto Fruitville Road. The march then took US41 Tamiami Trail, occupying the southbound portion of the road until entering onto Main Street and coming back to Five Points Park.

After the march, more speeches were given at Five Points Park until the event was disrupted by a thunderstorm.

The Sarasota Herald-Tribune reports that there were around 800 people participating in the march. Those who are interested in participating in future events are encouraged to contact ANSWER Suncoast.

Even in this small quiet city, protesters can peacefully disrupt the political status quo, if only just for an afternoon.