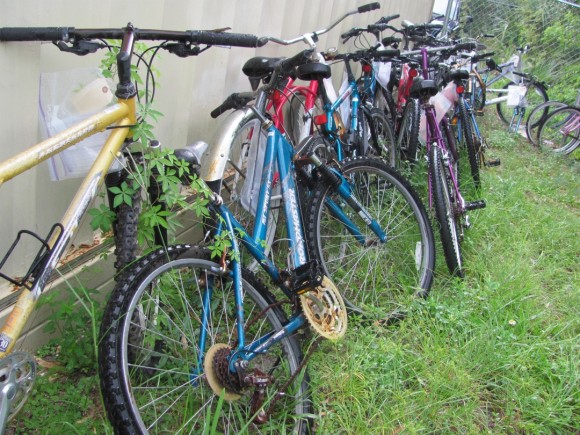 A portion of the bikes up for sale at the property auction.

Candy colored and with shine potential, they could be yours. But hurry, the good ones are few and won’t last long. The New College Police are up to their badges in bikes from all cycles of life. The bikes will be the main attraction at the Campus Police Abandoned Property Auction taking place on Friday, Oct. 8 from 9 a.m. until 2 p.m. at the Physical Plant parking lot.

Of the 31 bikes up for auction, only a few are in “good” shape. Many are rusted and have broken parts or flat tires. Lieutenant Michael Kessie gave an estimate on the price range, stating, “If it’s a nice one [bike], maybe $20, $25 — we’re not experts at this. And the other ones that are junk, maybe just a couple bucks. It’s more junk than anything.” The campus police set prices for all auction items.

Aside from the bikes, other items will be up for sale: one bike tool kit, one iPod and a few pairs of sunglasses.

“Auction” may be a misleading term for the upcoming event, as there will be no bidding process but rather items will have set sticker prices. The auctioneers are willing to negotiate a little on the prices.

“First of all we want to try to get rid of everything, and if a student buys it, so much the better,” Kessie said.

In accordance with Florida statute 705.18, the proceeds from the auction will be placed in the Financial Aid Fees-Local Funds account, which, according to Controller William G. Lawhorn of the New College Business Office, incorporates funds for both need based financial aid and student wages. Kessie said that in the past, auctions have only brought in a couple hundred dollars, if that.

Many items the police acquire come to them when campus staff call in to report found objects. Police keep track of who calls in which item. They are required to hold on to all property for at least 30 days, though Kessie said they usually extend that period. Upon being found, the lost items are quickly entered via computer into both the National Crime Information Center (NCIC) and the Florida Crime Information Center (FCIC).

“We take [bikes] in, we log them all and we run all the serial numbers through the NCIC computers to see if they are reported stolen somewhere,” Kessie explained. “We check the ones that have a New College sticker on them and see if we can find the owner. When we get to the auction, we run the [serial numbers] again. We do as much checking as we can to make sure we get it back to the rightful owner.”

Between the past summer and the current semester, campus police rounded up 41 bikes, nine of which were returned to the owners once the fall 2010 semester began. One of the remaining bikes will not be auctioned as Kessie said he might know to whom it belongs. If those at the auction identify an item as belonging to them, they need to provide proof of ownership, such as a serial number or a receipt.

As for items not sold, some are donated to Goodwill, while bike parts are offered first to the Bike Shop and cell phones are given to the local Safe Place and Rape Crisis Center (SPARCC). “They help assist victims of sexual assault,” Kessie said. “We give them the phones so that [victims] can at least use the phones to call 911.”

Regarding the history of auctions on campus, New College Chief of Police Wesley Walker said, “Basically as long as I can remember we’ve been doing them. However, we have had instances in the past where if we don’t have enough property and don’t think it’s even worth the effort, we haven’t done them.”

Three weeks before the event the auction already caused a buzz. On Sept. 17, Campus Police officers Jennifer Andreoli and Christopher Rivett went to retrieve an old abandoned bike reported outside of the Four Winds Café.

“It [the bike] was buried in the ground,” Kessie described. “It looked like an art project.”

According to Rivett, Andreoli tried to lift the bike up from under the seat. Neither was aware of a beehive underneath, and upon lifting the bike, bees swarmed and one stung Andreoli. Andreoli denied treatment but did file an incident report. The officers called Physical Plant to spray the swarm so that students passing by would not be harmed.