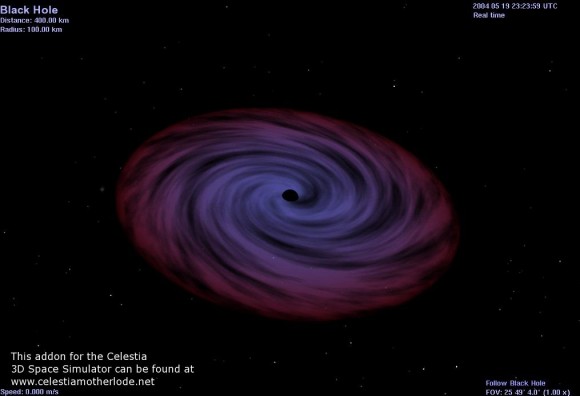 Ruppeiner was also the first to calculate that a black hole’s charge is very stable, differing from zero by 3.301 electron units on average, assuming an uncharged background. He used Fluctuation Theory to do so. “It’s crazy what people overlook,” he said. “Why didn’t anyone think of this?”

Sometimes, scientific knowledge is furthered by accident. That sort of serendipity was impressive enough when it happened in the time of alchemy and geocentricity. But developing a tool that some think could be used to determine the make-up of a black hole — and this in the time of space travel, plastic surgery and Facebook, when science has already come so far — well that makes those of us on Facebook feel slightly unaccomplished.

At a presentation he gave in Chae on Feb. 25, Ruppeiner protested, “I’m not a black hole guy.” Considering that his work could lead to greater understanding of those hungry dark masses, that leaves most of us in the black hole, where science and reason break down.

The tool is called thermodynamic curvature and Ruppeiner was the first to discover it. At that time, he was interested mostly in fluids and “in ordinary thermodynamic things, things of this earth,” Ruppeiner said. “In 1997, some guys at Stanford applied this idea to black holes” and Ruppeiner followed suit.

Ultimately, it describes the size of organization of the atoms that make up a thermodynamic system — a system in which heat and energy exchanges take place. In fluids, for example, one atom can attract others within a certain range, leading atoms to group together into what is called a droplet. These droplets form and disappear continuously and the length of any droplet is called its correlation length. Thermodynamic curvature is proportional to these lengths and reflects the fluctuations in droplet sizes. For a black hole, one could determine the average correlation length of its droplets and compare it with that of a substance for which the make-up is known, giving a model of comparison to determine what the atoms of the black hole are.

Thermodynamic curvature is grounded in Fluctuation Theory. In fluids, “there’s this atomic noise going on, fluctuations, atoms moving this way and that, bumping into each other, pulling each other, repelling each other,” Ruppeiner explained. “[This] jitter is the foundation for … thermodynamic curvature.” If, like in fluids, the atoms of a black hole jitter, then so do its properties. According to the No Hair Theorem, there are only three observable parameters of a black hole: its mass, angular momentum and charge. But its temperature and density also fluctuate at different points on its surface and the fluctuations of any of these properties represent different states of the black hole.

From the equation given by this metric, thermodynamic curvature can be determined. Since for black holes, the probability of fluctuation that gives the metric can be determined in terms of its mass, angular momentum, or charge, a black hole’s thermodynamic curvature can be calculated in terms of those same measurable properties.

While the thermodynamic metric and curvature require that the atoms of a black hole jitter, jittering plays no part in the widely accepted view of how a black hole forms: a huge mass collapses in on itself until it is just a mathematical point with no mass and infinite gravity, a singularity. At a distance around the singularity is the event horizon. But if, as in this view, there is no matter on the event horizon, then there is nothing to jitter.

“I would claim that if you have a thermodynamic picture, you gotta have the jittering if you look at a fine enough scale,” Ruppeiner said. “And if something is jittering, you know things gotta be made of something … People think this idea of all the mass just simply collapsing to a point, this is, if not outright wrong, it’s simply too limited.”

Instead of a singularity, Ruppeiner supports the membrane paradigm view, which says that matter is on a stretched event horizon and the jittering of that matter gives rise to thermodynamic fluctuations. From his own research applying thermodynamic curvature to different substances, Ruppeiner came up with a table of curvatures corresponding to different interactions. One finding was that for repulsive interactions between atoms, the thermodynamic curvature is positive, leading him to what he called “an interesting thought” as to what the event horizon of a black hole may be made of.

“Quarks are fermions,” Ruppeiner said. “So quarks would have repulsive interactions, by the Pauli exclusion principle, [and so] quarks would have positive curvature. And all these things have been found to be true for black holes. Is that the only possibility? Well no, that’s just a possibility.”

Such an organization would relate to the Information Paradox, which says that all information is lost once it enters the black hole, including what went into the formation of the black hole.

“In principle, you can know where every molecule is, the position, what kind of molecule is there at every point in space,” Ruppeiner said. “I mean there’s lots of information present in like a big gravitating mass. And if that all of a sudden goes behind the event horizon, then according to the No Hair Theorem, the only information that’s left are three numbers! I mean imagine the information that’s in there, the position and composition of every atom in a three solar mass object. All mushed down, to three numbers in the end. All lost.”

As far as future research relating thermodynamic curvature to black holes, Ruppeiner said he “probably will work on” it in the future but has other projects right now. “[Thermodynamic curvature] gives some guidance to theorists who are looking for the atoms in a black hole. Without that, what are people going to do? They come up with this, try this model, try that model … It’s a very hard problem and you might never guess what it is. If you have some guidance as to what it might be, that limits the possibilities and maybe you can get to the truth.”