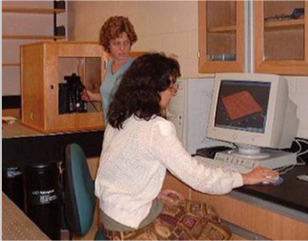 After coming across a small black and white physics textbook during her youth in Bulgaria, New College Professor of Physics Mariana Sendova’s curiosity about the world was anchored in physical phenomena. Today, Sendova is internationally recognized for her contributions in applied physics and material science. On campus, Sendova’s research and lab provides students with unique opportunities to collaborate on novel and meaningful projects. With current investigations into the properties of surfaces and light in her self-established lab, students are engaging with research and using state of the art equipment such as X-Ray diffractometers and Raman spectroscopies.

The primary goals of Sendova’s lab, entitled the Optical Spectroscopy and Nano-Materials Lab, are to discover new materials and ways to measure the material’s emergent properties.

One method for creating new materials in Sendova’s lab involves the extraction of single molecules using Raman spectroscopy, a tool that is also capable of determining the chemical composition of materials. For example, in one project Sendova and her students extracted a single water molecule from the inorganic compound iron hydroxide, thereby transforming it into the mineral, hematite. Sendova used pulses from lasers of the Raman spectroscopy to convert the material to hematite, leaving with it a red circle marking the contact of the laser beam. She noticed the size of the spot changes with temperature. Temperature is dependent on the power of the laser, and thus Sendova began a new project to study how the size of the laser’s red spot changes with heat and power.

Third-year transfer student Colton Fitzjerrald, vice president of New College’s chapter of the Society of Physics Students and a natural sciences student representative, has worked with Sendova on the project of variable spot size. Fitzjerrald analyzed the areas produced by the laser after the material was exposed to different temperatures and laser power.

“The most interesting part is that, coming into it I didn’t understand absolutely anything,” Fitzjerrald said. “So it was a big learning curve to try and approach [the problem] and not understand how things work and slowly start to piece things together.”

Other research  in the lab using the Raman spectroscopy builds off of work with the laser’s red dot, such as explorations of the dot’s surface area. The surface area of the red dot is the amount of transformed material (i.e., the hematite) after the removal of a single molecule, and the surface area in turn can be used to estimate the activation energy of this reaction. Activation energy is the energy that provides the necessary ‘boost’ any reaction needs to occur. In this project, the activation energy is the energy that is needed to extract the water molecule and instantiate the material’s transition from iron hydroxide to hematite. Sendova, accompanied by the help of a few students, thus set out to establish a method for accurately measuring the red dot’s surface area. Sendova’s research investigating the activation energy needed to extract a water molecule and transform iron hydroxide into hematite is relevant to discussions of whether there is water on Mars, where iron hydroxide is a main component of the planet’s composition.  Additionally, accurately measuring the surface area of the laser’s spot, which is on the scale of nanoparticles, has the potential to replace traditional, erroneous methods.

To investigate the relationship between surface area and activation energy, third-year Matt Mancini worked with Sendova to determine the surface area of the laser’s dot. The method Sendova and Mancini developed involves a unique approach to image analysis that calculates the boundaries of an object by identifying differences in contrast across the pixels that make up an image. Their approach more accurately calculates the size of an object by precisely identifying the unique contrast range of the object and differs from the traditional, more inaccurate, method for measuring surface area on various scales that relies foremost on edge detection.

“It’s not about doing rigorous physics, which is nice in the theoretical context, but it’s about solving real-world problems in an interesting way,” Mancini said. “It’s nice to pull your head out of those books for a second and look at what’s actually happening in the real world and describe some sort of phenomenon.”

Currently, Mancini is working with the X-ray diffractometry in Sendova’s lab, a measuring instrument used to determine a material’s crystal structure. Mancini’s objective with this project is to identify the amount of material left over from a separate project undertaken in Sendova’s lab that extracts a single carbon dioxide molecule from magnesium carbonate to make magnesium oxide. Mancini is also planning to work as Sendova’s summer research assistant to investigate the thermal, or heat-related, properties of different glasses.

Sendova has been published in various journals including the Journal of Applied Physics and the Journal of Raman Spectroscopy, and has had research sponsored by the National Science Foundation, the United States Department of Education and the United States Department of the Army. The U.S. Department of the Army awarded Sendova with a $1.7 million grant, one of the largest in New College’s history, to work with laser-assisted technologies in nanoscience in May of 2009. Sendova and her students have also collaborated with the Ringling Museum to explore how UV light changes the pigments of a painting and which pigments are present on a painting—relevant topics for art conservationists and historians. Many of the projects Sendova has published feature New College students as co-authors.

“Every paper I see as a baby,” Sendova said. “It’s a materialization of your ideas, and this is one way [I can contribute] to the society, and [teaching students] is the other way.”

With projects branching off of projects, the constant questions surfacing in Sendova’s lab ensure students have continuous opportunities to engage in novel research and potentially establish themselves as undergraduate co-authors.

“[My] favorite thing [working with students is] to see them grow and mature, and I enjoy very much when I am able to publish something with them,” Sendova commented. “[Working with students at New College] is completely different from doing research in graduate school. In graduate schools the professors do have helpers that are students who go there already, trained in how to do something, but here first I have to train the students, which is natural and I enjoy it.”